The strong growth in global fertilizer demand over the past five years has been driven by increased sales into mature consuming countries as well as the development of new markets. In the medium term, consumption growth is set to be more evenly spread across world regions, and mid-tier markets such as Russia are key to global demand growth going forward.

With the rise of Russia as a major player in global wheat production, fertilizer demand has been exceptionally strong over the past five years. CRU recently visited Rostov Oblast in South Russia to better understand the domestic fertilizer supply chain and agricultural demand drivers.

Background to Russia’s agriculture dynamics
Grains account for three quarters of Russian agricultural production, with wheat representing close to half of total harvested area. Russia harvested 27.3 million hectares (ha) of wheat in 2017, but this is anticipated to drop 7% y/y to 25.5 million ha in 2018 following drought. 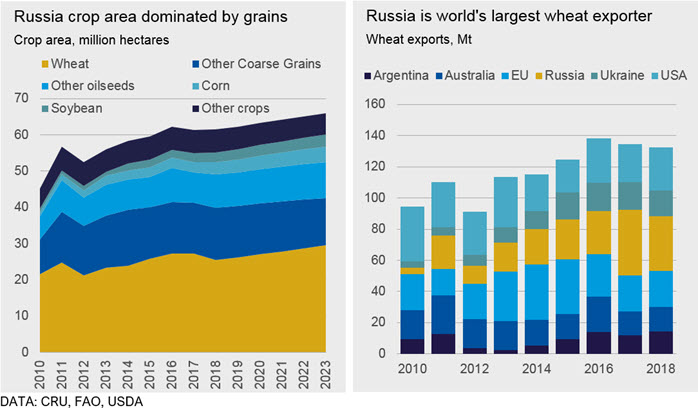 Climatic and geographic factors limit Russia’s agricultural output. Russia’s northerly location results in cold weather and low thermal conditions leading to shorter growing seasons compared to the rest of the world. A significant proportion of crop area is in West and South West Russia in the Southern, Central and Volga regions close to the Ukrainian border.

Winter wheat is mainly grown in Central, Southern, North Caucaus districts, whilst the production of spring wheat is concentrated in Volga, Urals and Siberia. The shorter growing seasons in these regions permits wheat to be grown in spring only. 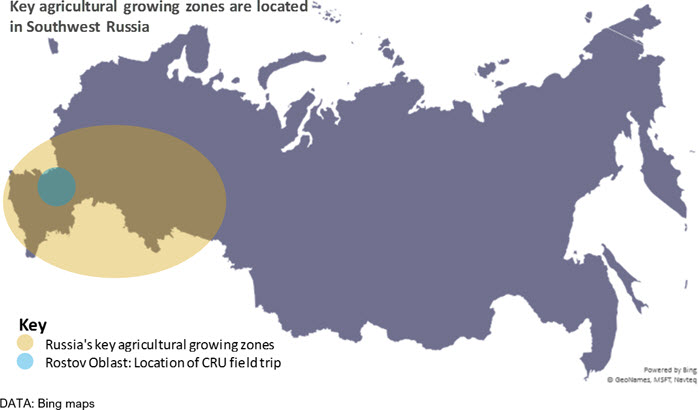 Rostov Oblast in Russia’s Southern region is a key agricultural powerhouse with 5.8 million hectares of cropped area. Rostov Oblast makes up for 3.9% of all agricultural land in Russia. Rostov has the second highest grains planted area in Russia but is tenth largest in arable land. The soil and climatic conditions of the region, despite periodically recurring droughts, are favourable for the production of crops. The region has several ports from which wheat is exported to Egypt, Indonesia, Lebanon, Georgia and Turkey. The Southern region accounts for 60% of Russia’s sunflower area.

Drivers of crop expansion
After the fall of the Soviet Union in 1991, Russia’s farming business model changed drastically. Collective farming shifted to individual farms and large agricultural enterprises. However, in this period, farmers continued to rely on outdated soviet technology and practices, which limited agricultural productivity.

The farming sector has slowly adapted to the societal and business changes over the past two decades. Crop expansion has been driven by modernisation, investments in technology, rising use of chemical fertilizers, new seed varieties and adoption of new production methods. All of these factors have significantly improved yields and operational efficiencies.

The substantial weakening in the Rouble against the Dollar in 2014/15 boosted the competitiveness of wheat exports prompting farmers to grow more. Given that wheat is sold in global markets in dollars, this has helped to boost Russian farm margins and therefore technological investments in production. 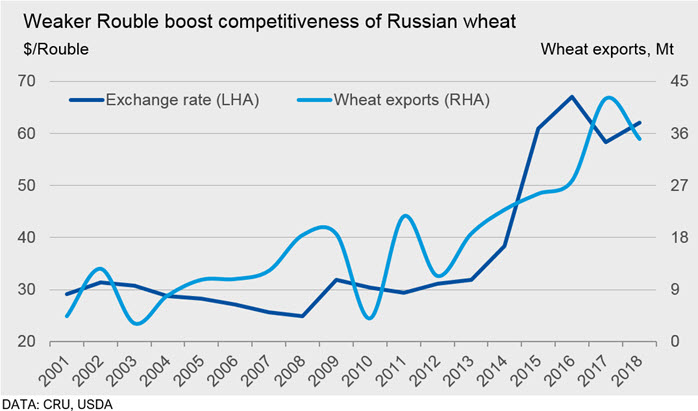 Farms are modernising and investing in technology 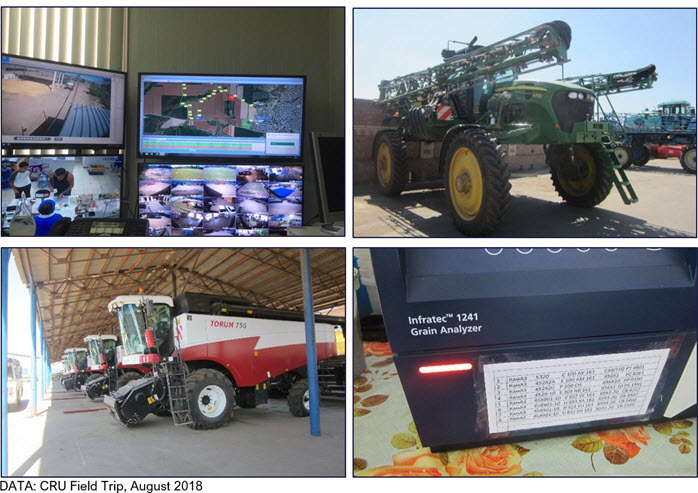 What has this meant for fertilizer demand?
Over the past five years, the rapid growth in agricultural production has led to a strong expansion in fertilizer demand. Fertilizer demand in the Rostov Oblast area has been increasing 8% per annum, according to data from the Ministry of Agriculture. Due to limits on Russia’s arable area potential, fertilizer consumption is being underpinned by rising application rates rather than land expansion.

Policy has also been an important driver. As Russia exports 75-80% of its fertilizer production, domestic prices are linked to world prices. However, after the strong rouble devaluation in 2014/15 farmers campaigned for fertilizer prices to be untied from world prices. Fertilizer producers agreed to provide a 10-15% discount on export prices for the domestic market in 2014. This has boosted affordability levels and encouraged higher levels of application.

Over the past three years, application rates in the Rostov region have increased by 50%. In 2014 approximately 80kg/ha of total fertilizer was applied, increasing to 120kg/ha by 2017 but this depends on farm size and can range from anywhere between 20kg/ha to 400kg/ha. This increase in application rates is a general trend occurring throughout Russia. In terms of the product mix, around 100kg/ha of phosphate fertilizer (mainly MAP and to some extent NPK) and 100kg/ha of nitrogen (primarily AN) are applied on average in the region. The most popular grade of compound fertilizer is NPK(S), more specifically 10:26:26(2). The straight application of MOP is limited due to potassium rich soils but NPKs with low K content are increasingly popular with farmers. Crops such as potatoes and beetroot require higher levels of potassium.

Farmers typically apply MAP during planting for winter wheat in September. Nitrogen side/top dressing applications occur following snow melt in spring up to 2-3 times each season. Nitrogen top dressing mainly uses AN, although urea and UAN are also consumed in smaller volumes. After wheat is harvested, farms tend to leave the stubble or add straw onto the fields. Ammonium Sulphate (AS) is then added to help with decomposition and create organic content for the soil. For sunflower, MAP or NPK(S) (typically 10:26:26(2)) is applied during planting.

Due to higher MAP prices in 2018, some small farmers have shifted to NPKs because the P content is cheaper on a nutrient basis. However, large agricultural enterprises do not appear to be affected greatly by reduced affordability. Crop margins have been good and the influence of fertilizer on final yields is too great to risk not applying.

CRU’s conversations with three large agribusinesses, all of whom are farming above 10,000 ha of land and purchasing an estimated 3,000 t (each) of chemical fertilizer per annum, revealed intentions to increase application rates to maximise yields. CRU’s modelled estimates of the product mix for phosphate and nitrogenous fertilizers were consistent with what was experienced on the field trip.

An insight into the domestic value chain
To better understand Russia’s supply chain, CRU had the opportunity to visit PhosAgro’s regional distribution facilities in Rostov Oblast. PhosAgro is rapidly expanding fertilizer sales and domestic retail operations, taking advantage of the boom in agricultural production. 10 subsidiaries and 5 separate subdivisions of “PhosAgro-Region” LLC operate in all major agricultural regions in Russia, which account for up to 70% of the consumption of the most popular NPK grades and MAP.

"PhosAgro-Region" operates 24 distribution centres with a total storage capacity of over 470,000 tonnes. The availability of accumulated fertilizer stocks in warehouses throughout regions makes it possible to reduce logistic expenses and quickly respond to the needs of agricultural producers in times of peak demand.

PhosAgro’s Salsk warehouse is one of the largest facilities in the region, distributing 60,000 t of fertilizers annually. The facility is modern, with its own railway and packing operation. It serves around 600 clients of varying size, with the largest farms buying thousands of tonnes of fertilizer and smallest producers only a single bag. Another facility located in Bolshaya Kalitva, selling 20,000 t of fertilizers annually, has plans to upgrade operations and distribute 40,000 t in the future. This highlights the significant growth potential in the domestic fertilizer market.

The diagrams below provide an insight into the seasonality of demand for distribution and PhosAgro’s supply chain. In terms of seasonality of demand for retail distribution, fertilizer sales strengthen during spring planting and top-dressing applications for winter wheat between March and May. Peak fertilizer demand is for winter wheat planting in September. However, the buying season starts as early as June/July as farmers harvest and prepare soils for planting. Outside high/peak demand months, distribution facilities focus on stock building, expanding storage capacity and maintenance.

Seasonality of demand for distribution network 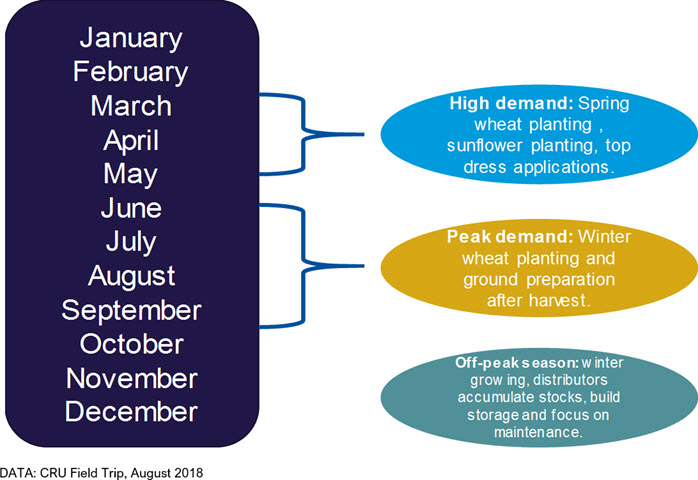 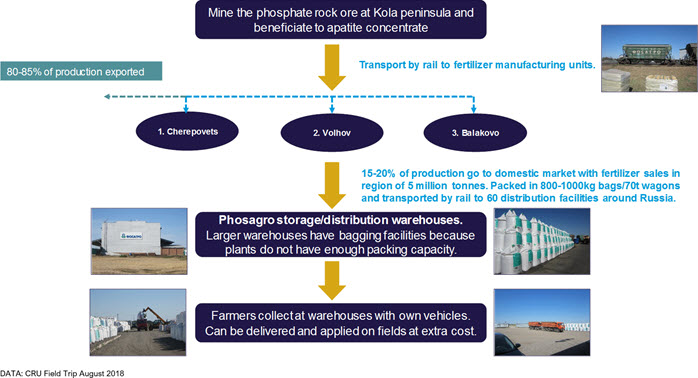 Russia’s fertilizer demand will continue to strengthen
Prospects for Russian fertilizer demand growth are projected to remain strong, with total nutrient consumption expected to grow 4% per annum through to 2023. Farms continue to modernise and intensify production. Increasing fertilizer use has been a key driver in raising productivity and there is considerable upside for application rates, with Russian yields lagging behind the EU. As Russian farmers have become more competitive in the global wheat market, high nutrient drawdown from record harvests is anticipated to boost fertilizer demand further, particularly of MAP, AN and urea. In the nitrogen market, AN is expected to remain the dominant product but its share is likely to be slightly eroded by urea, as growing capacity means supplies enter the domestic market. For the phosphate market, MAP is forecast to be the most important product, but its share could decrease due to the rising popularity of compound NPK fertilizers.

In recent years, crop margins have improved, allowing farmers to invest in higher value fertilizers such as NPKs. Companies such as Phosagro are responding to domestic demand by investing in the expansion of distribution networks. Russia’s AN, urea, UAN, MAP and NPK capacity is expected to rise substantially in the medium term, exceeding domestic demand in terms of volume. Although, domestic demand is anticipated to expand at a strong rate, Russia’s significant growth in production means it will remain a key exporter of fertilizer products to the global market. 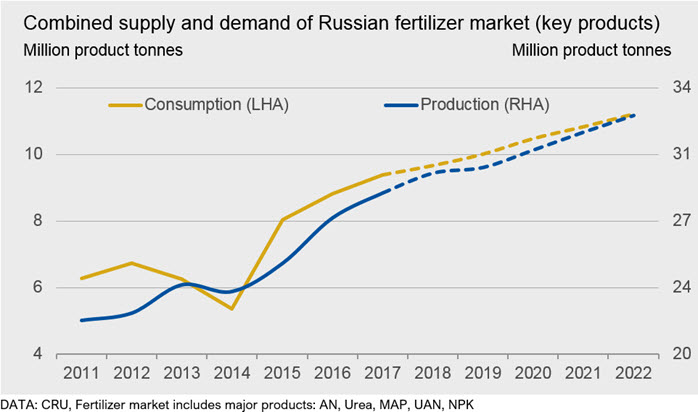