In December 2018, we conducted our annual macroeconomic survey of clients’ views for 2019. The survey highlighted that we enter 2019 with greater uncertainty and pessimissim than 2018 – a sentiment that was also echoed in this year's World Economic Forum in Davos.

This pessimism is captured by the table below. It reports our clients' view on the key global downside risks. Two things stand out: the share of clients seeing downside risks has increased – the 2019 figures are larger than 2018; and the main worry comes from potential slowdowns in US and China, as well as the ongoing trade conflict between them. 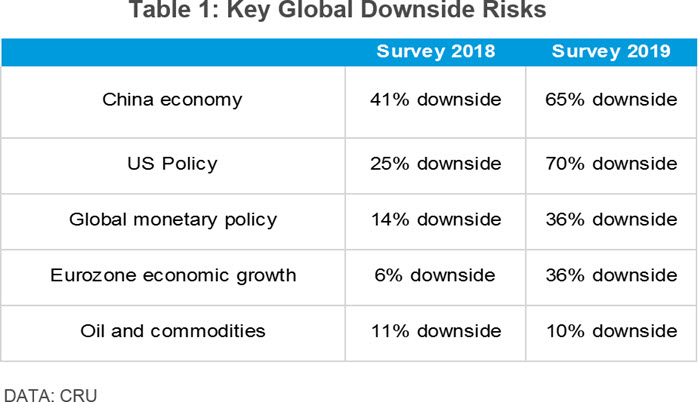 The table below summarises the survey results in a snapshot, showing the survey questions and the most frequent response. Overall we found strong consensus across different geographic locations. The rest of this insight provides more detail on each of these issues. 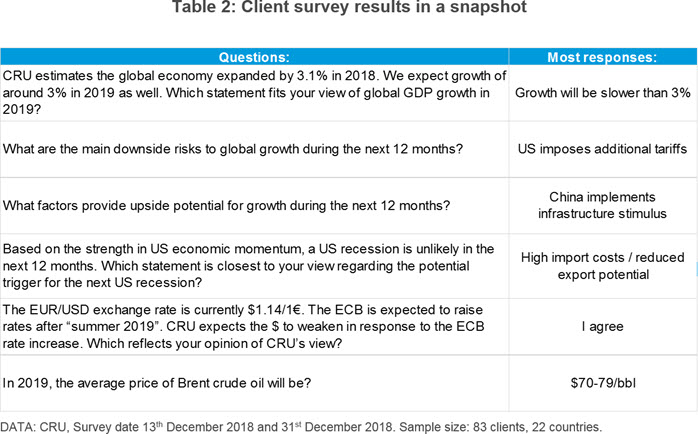 Global growth expected to be slower in 2019
In the strongmen era of Trump and Xi Jinping, predicting the future is becoming more challenging. Much of the Asian market has been shaken by unpredictable dynamics and tension between the world’s two largest economies, the US and China. Populism and nationalism have been on the rise in Europe, with Brexit and fraught agreement of Italy’s budget, have created uncertainty in financial markets and global business sentiment has taken a hit.

CRU estimates the economy grew by around 3.0% in 2018, and we expect it to slow to 2.7% in 2019. This is in line with our clients’ expectations, where 58% of our survey respondents anticipate economic growth to be slower than 3% in 2019 whilst 33% expect economic growth to “stay the same”. Participants in the Asia region showed the most concern with 75% anticipating slower economic growth in 2019. This is not surprising considering their proximity to China, which has once again emerged as a key focal point for the macro picture in the coming year.

Policy drives the key risks in 2019
At the time of writing, Presidents Trump and Xi have put their bilateral trade war temporarily on pause. Both presidents came to an agreement after the G20 meeting in late November to hold tariffs at 10% on products worth $200bn after 1st January 2019, rather than raising them to 25%. Until 1 March (when 90-day truce ends) progress on the trade talks will be monitored closely.

To assess both upside and downside risks in 2019, we asked our clients to choose up to three different events that they saw as most likely to impact global growth in 2019. The trade war and prospects in China is where the greatest concerns lie, and it is also where there is the greatest potential for upside news. This can be seen in the chart below, where the response on the trade war and China growth are almost mirror images of each other. The main downside risk to global growth arises from additional tariffs, this was cited by 70% of respondents. On the flip side, 57% of respondents believe that US could lessen protectionist measures, providing upside potential for growth in the world economy this year. Interestingly, the upside was most prominent from clients in the Americas region at 69%. 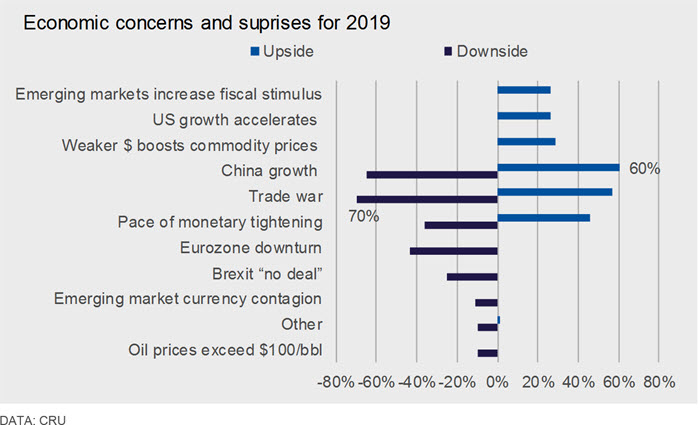 Given that China accounts for a substantial portion of commodity demand, our clients were also focused on China’s economic performance. About 65% of respondents expressed concern that China’s economy could face a sharp downturn, up from 41% in the 2018 survey. However, 60% of respondents cited that infrastructure stimulus from China as the main source of upside news for 2019. In this case, the upside was prominent across the Asia region (75%).

Of the other choices in the survey, Brexit was also a key concern. 25% of respondents perceive a “no deal” Brexit as a downside risk. Finally, higher oil and commodity prices were seen by 29% of clients as providing faster expansion for emerging markets.

Protectionism is the Achilles heel for the US economy
The current US economic expansion will be the longest on record, if it survives until the end of June 2019. Expansions do not necessarily die of old age, but we are beginning to see signs in the labour market and in terms of interest rate expectations which suggest that the end of the current expansion might be coming. 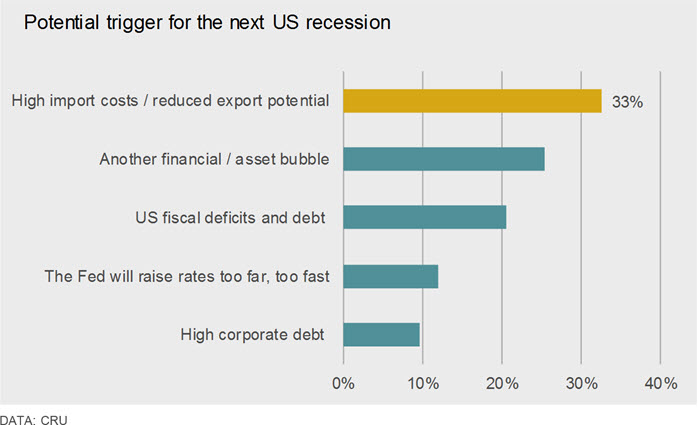 Dollar strength expected to reverse
The value of the dollar in 2018 was at its strongest since 2000. The dollar hit a low point on 1 February 2018 largely due to strong Eurozone growth and in anticipation of the ECB beginning to raise rates. However, in March, after a spate of weak activity data, the ECB announced that it would stop QE in 2018, but not raise rates; markets were surprised, and the dollar strengthened significantly, and it has barely eased since then. By 30th November, the trade-weighted US dollar was 8% stronger than at the end of 2017 and was at its highest level since Q1 2002. 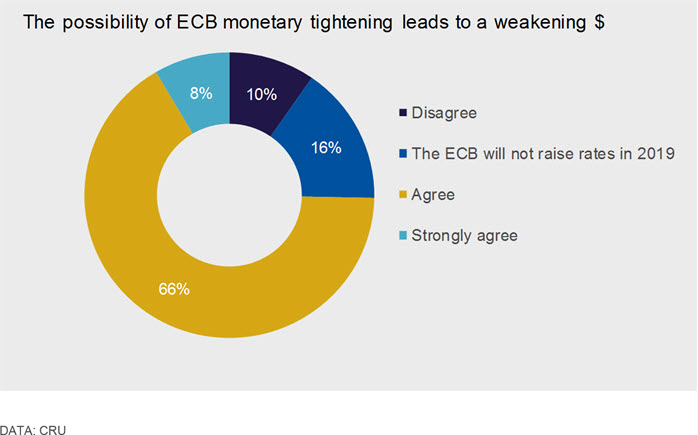 Strong US economic growth, the Fed’s hiking of interest rates through 2018 and uncertainty around trade policy are all contributing to a strong dollar. A shift in policy by the ECB “after summer 2019” is the single event that has the potential to reverse sentiment around the dollar. We asked our clients whether they agreed with our assessment. Nearly two-thirds of the respondents agreed that ECB monetary tightening will result in a weaker dollar whilst 16% of respondents indicated that they did not expect the ECB to raise rates.

Oil prices will be determined by demand factors in 2019
Brent crude prices had a rollercoaster ride in Q4 2018. After hitting a four-year high of $86/bbl in the first week of October, market sentiment completely reversed and heavy investor selling caused prices to drop to ~$50/bbl by late December. As we look to 2019 uncertainty abounds. Ever increasing US production, OPEC+ cuts and ambiguity around Iranian output leaves the supply picture difficult to assess. A slowdown in global economic growth, most notably due to the US - China trade conflict, will likely dictate the demand picture in 2019. As always, predicting the oil price this year will be as difficult as ever. 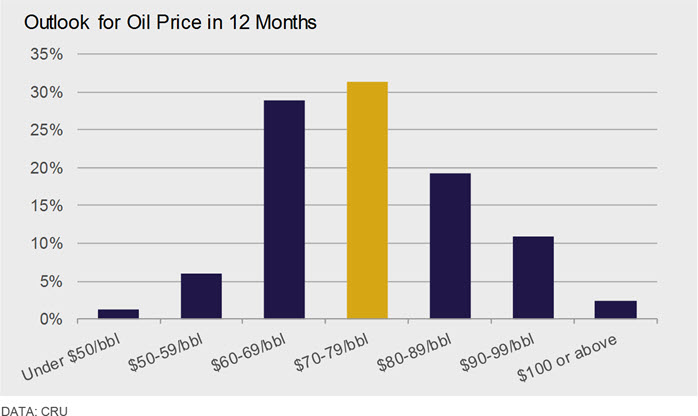 Change is in the air for the global economy
Global GDP growth hit a cyclical peak in Q3 2018 and is set to moderate during 2019. Transition from stronger to weaker growth has been underway for several months now but the recent negative reaction in the equity markets appears to reflect several key risks which need to be resolved. The issue of trade protection carries over from 2018 and continues to cause uncertainty for the global economy. There is some hope that with the US-China conflict on pause, things will not escalate further and allowing the global economy to continue to expand.

The ECB ended its QE programme in December 2018 and is expected to raise interest rates. This is likely to result in a weaker dollar by Q4 2019 which would reduce currency pressure for many import-dependent emerging economies.

Concerns over global economic growth are clouding oil market sentiment, and probably now underestimating potential supply constraints – the opposite of conditions in 2018. If global demand is better than expected and supply tightens, prices could rise into the $70-80/bbl range, as was the case during most of 2018.

CRU’s view is that, although the global economy ended 2018 on a rather negative note, there are positive signs that support our view that global GDP growth in 2019 will be a bit slower than in 2018, but nothing close to recession levels.