Is the auto industry driving EU steel sheet demand towards a cliff?

The European car industry is currently experiencing challenges from around the world that may lower European automotive production, a key element of steel demand in the region.

In addition to Section 232 tariffs on cars imported into the US, Japanese car manufacturers may shift production back to Japan, resulting in lower sheet demand in Europe. In this Insight, we explore how these risks could affect European steel sheet demand.

The European car industry is facing challenges on multiple fronts. In the UK, Honda announced the closure of their production in Swindon. Whilst this could easily be seen as a ‘Brexit’ effect, there are concerns this may be the start of a broader shift for Japanese car manufacturers re-shoring production back home. In addition, the US administration is expected to declare car imports a national security threat allowing them to impose tariffs under Section 232 (S232), similar to the measures already introduced for steel and aluminium. Meanwhile, sales of European premium segment cars have been affected by a slowdown of demand in China. All of this is set against a backdrop of trade tensions between US and China, fears about a coming recession and a global economic slow-down which are all weighing on the car industry. In this CRU Insight, we outline the impact of decreasing European car production on European sheet demand, driven by the risks highlighted above. 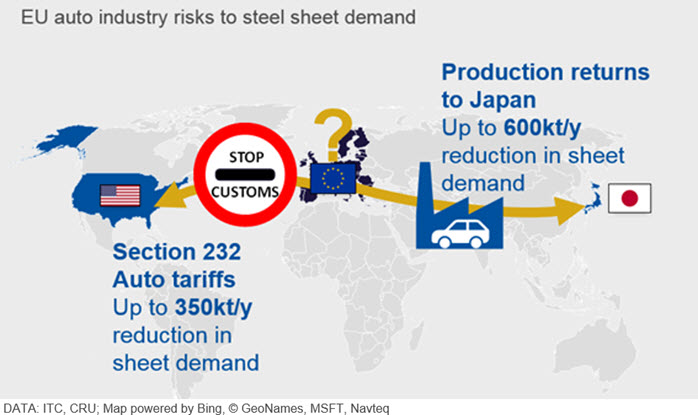 US car imports maybe hit by Section 232
The US is the most important export market for European produced cars, accounting for 1.2 million units—31% of non-EU sales. However, the potential introduction of S232 tariffs on cars imported into the US from around the world is likely to lead to demand destruction in the US, and, in turn, lead to lower demand for cars produced in the EU. I n this scenario, CRU estimates that Western European steel sheet demand may reduce by 250-350 kt/yr. In addition, it is not only finished vehicle sales that are expected to be affected by possible trade measures. Car parts account for 34% of sheet demand and are also expected to be impacted by the Section 232 tariffs. 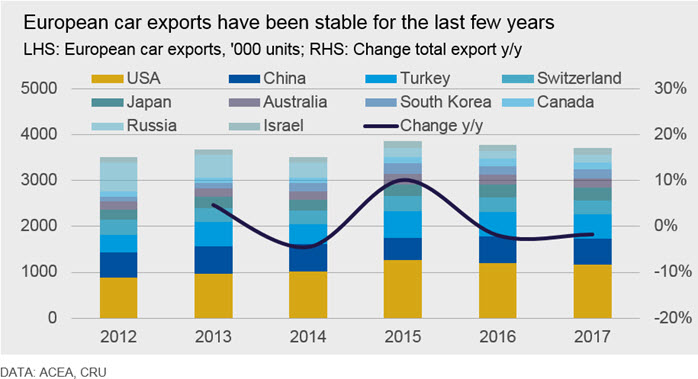 To support the case for Section 232 tariffs on car imports, the US administration conducted an investigation to determine if the high import numbers of non-US produced cars pose a risk to national security. Car imports into the US were worth nearly $300bn in 2017, accounting for 70% of all cars sold (excluding pick-up trucks). If evidence is found, Section 232 tariffs (or potentially quotas) may be introduced, similar to those in place now for aluminium and steel. That said, US tariffs on imported vehicles are not new as there is already a duty of 25% in place for the important pick-up truck segment. 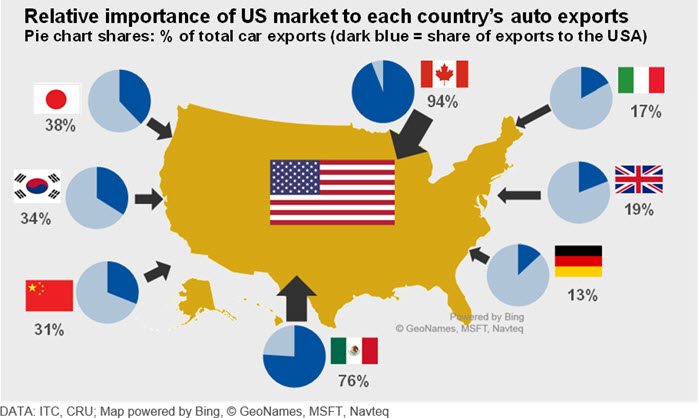 The Center for Automotive Research has published scenario-based estimates for demand destruction of imported cars if S232 tariffs are introduced. CRU’s base case is for a 10% tariff. At the same time, we assume exceptions for Canada and Mexico because all major US car producer have assembly lines in those countries and tariffs would cause an unacceptable level of economic damage. The estimated demand sums up to 1.5 million cars and an increase of the average price of imported vehicles around $1,300. This scenario translates to a reduction of sheet demand in Europe of 260 kt/yr. Our high case scenario includes 25% tariffs for all imported vehicles that would deal a blow to the US consumers. It is estimated that the number of sold vehicles would drop about 2 million leading to a price increase imported cars of nearly $7,000. The impact on US GDP is estimated to be profound with up to -$60 bn and reduction of European sheet demand would be up to 340 kt/yr. 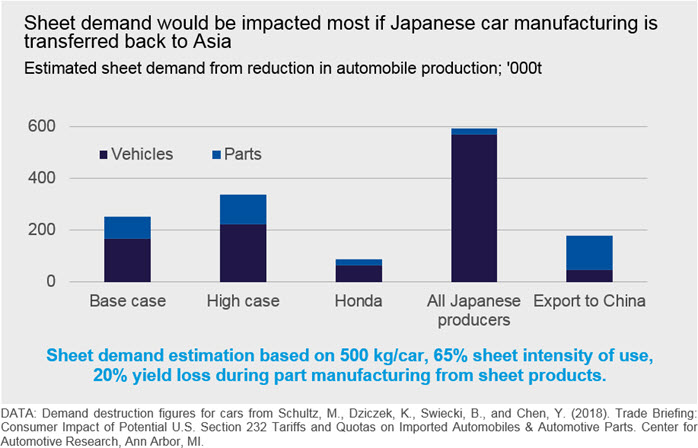 Japanese producers move production back home
The recent announcement of Honda to shut down the plant in Swindon in 2022 has sparked concern this is the start of trend of Japanese producers to shift car production back to Japan. By moving capacity, car production and research and development capabilities will be closer to where demand is greatest, namely in Asia. Car sales in Asia are around 45 million vehicles, compared to EU demand of 16 million vehicles. Japanese car manufactures produce 1.4 million vehicles in the EU28 in 2018 with Nissan being the largest producer with nearly 600,000 cars built. This total production translates to an estimated sheet demand of about 600,000 tonnes /yr. This means 0.5-1.0% of total EU28 sheet demand is at risk if car manufacturers decide to leave the EU. That said, if Honda remains the only Japanese producer to leave Europe, the reduction in demand is limited to c.90,000 t/yr.

Although our current view is that it is unlikely for all Japanese car manufacturers will leave the EU and as such this is not our currently base case. However, this is currently being revaluated because the European Commission recently concluded a new trade deal with Japan. This new deal eliminates duties on Japanese car exports into the EU and as such may support the structural shift of car production back to Japan: the removal of import tariffs, improves the competitiveness of Japanese produced cars sold into Europe.

The situation is different in the UK due to their expected departure from the EU in 2019. Car companies have expressed concern over their ability to export cars made in the UK to the EU, especially if a no trade deal is agreed. The UK exports about 50% of their car production to the EU with individual producers like Toyota shipping 87% to Europe. 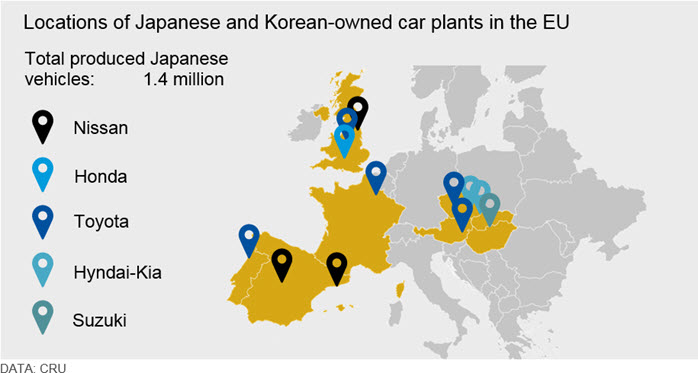 Chinese slowdown drowns exports from Europe
At the same time, a recent slowdown of consumption in China has led to reduced car sales there for western European carmakers. Car exports from Europe decreased 20% y/y; while exports from UK to China fell by 72% y/y. If continued, this would mean potential reduction of EU car sales in China of 114,000 units in 2019, with the equivalent steel sheet demand being 100 kt/yr. In addition, exports of car parts have fallen by -18% y/y in 2018 Q4, adding 180 kt/yr of sheet demand reduction to the problem.

Industry faces multiple challenges
There are other challenges ahead for the EU car industry. It is possible the US-China trade war intensifies, resulting in Section 301 tariffs being activated on the other half of Chinese exports to the US. As well as leading to lower growth, this would likely increase strain on the global supply chains. The car industry is dependent on barrier-free access to different markets due to the ‘just-in-time’ nature of car assembly logistics, meaning they are vulnerable to trade barriers and duties. Moreover, as concerns around a global recession grip Europe, consumer appetite for durable goods like vehicles may fall while recent emission scandals and tighter environmental regulations restrain sales of traditional combustion engine cars.

European sheet demand faces substantial reduction
The car industry in Europe is an important driver of sheet demand but faces a turbulent path ahead. The US threatens to impose Section 232 tariffs on imported cars that would hit the US as well as the EU market. Reduction of sheet demand depends strongly on the implementation of the tariffs and whether certain countries gain exemptions. The reduction of European sheet demand is estimated to be between 260-340 kt/yr. We estimate, that the potential closure of Japanese transplant car production capacity would reduce European sheet demand by about 600 kt/yr. However, at present we believe it is unlikely all Japanese manufacturers will leave the single market, that said, more closures are possible. An economic slow-down in China is expected to have the least influence on European sheet demand, reducing it in the range of 180 kt/ yr. That said, the recent stimulus package may help to reverse the impact. In the months ahead, we will continue to update our insight on sheet demand and in particular if the EU safeguard measures could counterbalance reduced domestic demand.