The price of polluting is about to take off — will you be affected? 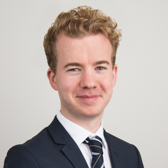 CRU’s assessment of EU Emissions Trading post 2021 suggests that prices for CO2 allowances will increase and be held in a higher range.

This Spotlight discusses the outlook for the EU ETS market. CRU’s assessment of EU Emissions Trading suggests that prices for CO2 allowances will increase from the current range and be held at a higher level. The resulting implications of this for affected industries will be explored in subsequent content.

The EU Emissions Trading Scheme continues to evolve
The EU Emissions trading scheme (ETS) is the flagship policy for delivering on the EU’s climate pledge to reduce greenhouse gas (GHG) emissions by 20% in 2020 and 40% in 2030, compared with 1990 levels. Until recently, EU ETS allowance prices have been low, remaining range bound between €5–10 /tCO2 for the period 2013–2018. This reflected the existence of a large surplus of excess allowances in the market. (In part, this was a legacy of the financial crisis which lowered economic activity for a sustained period).

At the start of Phase III in 2013, this surplus amounted to around 2.1 billion allowances, roughly equivalent to a year of total emissions under the scheme. Although this glut of excess allowances has been decreasing steadily, it remains stubbornly high keeping prices low

In January 2019, the EU moved to redress the issue of surplus allowances through the introduction of the “Market Stability Reserve” (MSR). Under this measure, excess emissions enter a reserve and are only re-released` if the market is tight. This intervention has been a key driver in pushing EU allowance prices to around €25/tCO2 as of June 2019.

Focus on the Market Stability Reserve
The excess allowances accumulated in the EU ETS market, between 2013–2018, keeping prices low. EU GHG emissions were lower than policy makers anticipated because of weak economic and industrial growth in the aftermath of the global financial crisis, rapid penetration of renewables (supported by strong subsidy measures) and low gas prices.

Policy makers have subsequently sought to stabilise and increase the carbon price. Initially, in Phase III (2013-2021) issuance of new emissions allowances within the EU ETS were to be “backloaded”. However, the new MSR, which became operational in January 2019, goes a step further. All backloaded allowances that were due to be released into the auctioned volumes in 2019-20 will now be placed in the MSR.

What will Phase IV look like?
The EU Commission appears committed to policy reform to deliver the higher and more stable carbon prices which will be required to support a transformation in the energy market. Further regulatory changes are anticipated as part of Phase IV, which take effect beginning in 2021. (See table below).

Under Phase IV, the cap will become progressively tighter, with accelerated reductions in the number of permitted emissions (1,768 million tCO2 in 2021 decreasing by 48 million tCO2 each year). Most power producers are being required to purchase 100% of the required allowances. Industrial producers (including metals, mining and fertiliser producers) will receive a decreasing number of allowances free of charge (even under the revised carbon leakage rules).

However, there remain a number of key uncertainties affecting the EU ETS market outlook including the rate of economic and industrial development, the technologies and input costs shaping returns to investments in emissions reductions, as well as the potential for revisions to key policy rules including the level of the cap and the precise form of the MSR (which is due to be reviewed in 2021 and 2026).

Will future carbon prices push higher?
What will this mean for future carbon prices? CRUs analysis of the outlook for the EU ETS uses a technical framework is similar to that employed when analysing more traditional commodity markets; we considers demand for allowances—a function of economic activity and the key technologies employed in the power and industrial sectors—and the supply of allowances, a function of EU ETS policy variables. 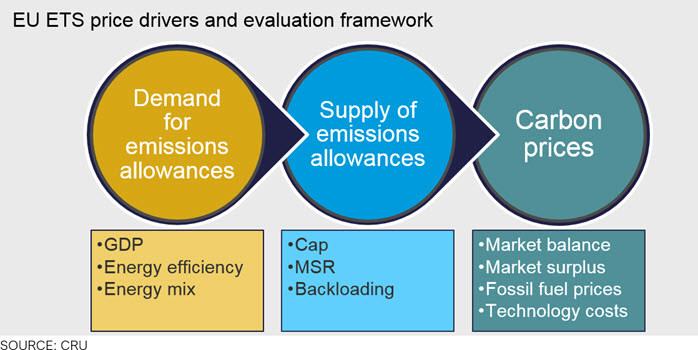 Across all scenarios, CRU find that carbon prices remain elevated relative to historical norms, reaching €25/tCO2 and €50/tCO2 by 2030 in the low and high case respectively. 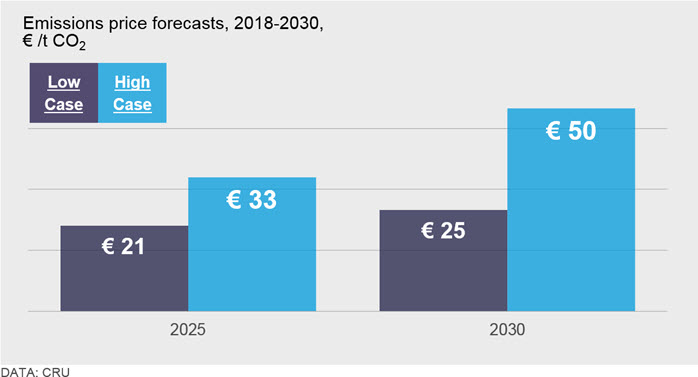 Conclusions
The EU appears committed to higher and more stable carbon prices required to support energy market transformation. The process of reforming the EU ETS has already begun. To this end, the recent introduction of the “Market Stability Reserve” (MSR) represents a significant effort to reduce the availability of surplus emissions that has dogged the market in recent years.

Further reforms are expected as part of Phase IV of the scheme with effect from 2021 (including a significantly tighter emissions cap). CRU’s analysis suggests that prices in the region of €20–50 /tCO2 are likely to be observed between 2021–2030 (depending on market and policy conditions).

All this will put pressure EU metals and fertiliser production costs. Ultimately the implications for the bottom line depends, not only on the carbon price, but also on the net allowance position of individual producers (which will require an understanding of plant level specifics, including allowance allocation rules, production technologies and investment plans).

Evaluating and adapting to these changes will not be straightforward for many operators and will require deeper understanding of a range of issues, including the shape of the future policy environment and the implications for carbon prices; and the commercial and investment implications at an industry and firm level.