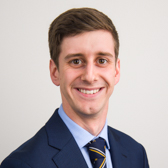 The novel coronavirus (2019-nCoV) is spreading quickly. There are now over 10,000 confirmed infections and the death toll exceeded 200 people on Friday 31 January.

The World Health Organisation (WHO) has now declared the outbreak as an international emergency as the total number of infections have surpassed that of the 2002–2003 SARS outbreak. The development is also having a significant impact on global commodity markets with price falls escalating in recent weeks.

The outbreak of the novel coronavirus is already having an impact on the Chinese economy. Millions of Chinese citizens are in ‘lockdown’ and the Chinese New Year (CNY) holiday has been extended from 30 January to 2 February in the entire country. However, multiple cities and provinces have ordered “non-essential” businesses to be suspended until 9 February, including Beijing, Shanghai and provinces nearby Hubei where the city of Wuhan is located.

There are widespread transportation bans all over the country, meaning that moving people, goods and commodities is challenging. However, cargo vessels are still allowed to discharge material at ports, but CRU understands that transportation from the ports is restricted.

China is the world’s largest consumer of many commodities, meaning any slowdown will have a significant impact on global commodity demand and prices. Financial markets are known for their quick response to ‘event’ risks and it is no surprise that most commodity prices have fallen over the past two weeks. Copper, oil and iron ore are leading the charge by falling more than others. However, China’s market share varies across products and the country is also an important producer of some commodities, such as coal, copper, aluminium, steel and fertilizers. 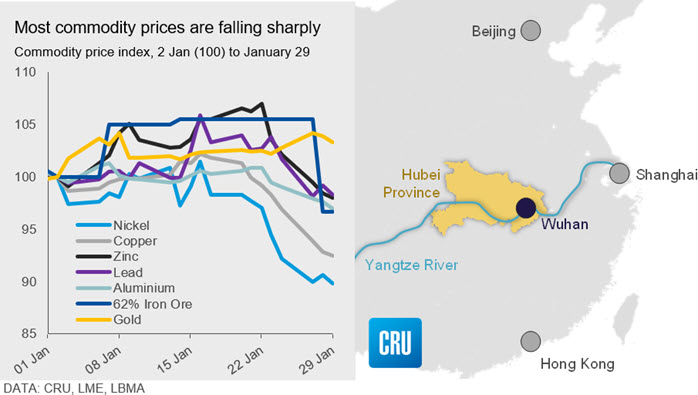 Steel: China is by far the largest steel producer in the world as the country accounted for 53% of global carbon crude steel production in 2019. During the CNY, demand for steel drops sharply as most people working in steel-consuming sectors such as construction, manufacturing, infrastructure and logistics are on holiday. The extended holiday means steel demand will remain weak for longer than normal.

Meanwhile, China’s steel sector is heavily reliant on integrated steelmaking (BF-BOF). This is a less flexible process and forces steelmakers to keep operations ongoing even during holidays. Therefore, semi-finished steel inventories are being built up even during periods of weak demand.

The electric arc furnace (EAF) sector, which is broadly scrap-based steel production, is more flexible and the furnaces typically shut down during the holidays. These facilities are unlikely to operate as long as steel demand remains weak. The same applies to downstream rolling mills, which can easily be switched on and off. There is currently no market activity, but steel prices are expected to fall when trading resumes.

Steelmaking raw materials:
the two key commodities in steelmaking raw materials are iron ore and coking coal. For iron ore, China imports ~80% of its total consumption and the country accounted for nearly 70% of global imports in 2019. Inventories at mills are usually built up prior to longer holidays in China. This is because blast furnaces (BFs) have to keep operating, even at times of limited transportation. Chinese mills did build up inventories in January, but due to the 2019 supply disruptions, mills have struggled to bring their iron ore inventories to normal levels.

In contrast to iron ore, China gets over 90% of its coking coal from the domestic market, mostly from the central parts of the country. The travel ban and extended holiday is likely to impact China’s coal mining activities as workers will be unable to return to the mines.

Therefore, iron ore will be more restricted by transportation restrictions, while coking coal supply will also be impacted by reduced mine production. In the past two weeks, the seaborne iron ore price has fallen by over 10% while the seaborne coking coal prices has actually risen as a result of the supply fears.

Thermal coal:
similar to coking coal, China gets 95% of its thermal coal requirement domestically. Disruptions to domestic coal mining would result in supply issues of the key fuel for the country’s power plants – coal accounts for 62% of total power generation.

Nevertheless, at the start of the year, stocks at ports and power plants are at multi-year highs, so most power plants are likely to withstand short-term disruptions without affecting electricity generation.

If transport disruption is extended to the point where plants run out of coal stocks, it is likely that electricity supply would be reduced and prioritised for households rather than industry. If coal supply disruptions are not severe, then there is more of a downside risk to power demand and coal prices due to the weaker economic activity caused by the virus outbreak.

Copper:
Hubei province is of limited importance to the global copper market but the smelting and refining operations of Daye are located around 100 km from Wuhan. There are numerous wire and cable companies in Wuhan but again that industry tends to be located in coastal provinces such as Guangzhou and Jiangsu.

Hubei is an important centre for automobile production, accounting for 7% of China’s total copper demand. Semi-fabricating capacity in Hubei is more limited as it tends to be located in the eastern coastal provinces.

China is vital to the copper market, accounting for half of global demand and around 40% of smelting and refining. However, CRU does not believe that the 2019-nCoV outbreak is going to significantly alter copper supply and demand fundamentals. The LME 3-month copper price, however, fell to $5,700 /t at end-January from trading at $6,300 /t at the start of 2020.

Nickel:
The rapid spread of the virus has brought negative sentiment to the nickel market, driving the price lower. There is no nickel pig iron capacity in the Hubei province so we expect that any impacts would come from a demand and logistics basis.

Zinc:
Hubei is China’s single largest auto galvanised sheet-producing region. Therefore, an extended slowdown in demand is likely to put pressure on zinc prices. Relating to consumption, the eastern provinces of Shanghai, Jiangsu, Zhejiang, Guangdong and Tianjin, home to many die casters and galvanisers, have extended the holiday for many industrial sites to 9 February. Assuming normal activity is resumed relatively quickly, we expect this to lead to demand increasing to higher levels to offset previous demand losses.

Lead:
Hubei has no known lead-producing mines or primary smelters, but it is still a notable lead recycling base, accounting for approximately 10% of Chinese secondary lead production. Hubei also represents 10% of the country’s total lead based-battery production. The short-term hit on Chinese lead consumption is going to be significant. In the last five years, Chinese Q1 lead consumption has dropped on average by 13% q/q. It is highly likely that the 2020 Q1 drop will surpass this average.

CRU’s view is that the seasonal dip in lead demand and production will be longer-lasting and more pronounced than in previous years. Investors’ concerns are well-founded, given that China accounts for just over 40% of both global lead consumption and production.

Aluminium:
during the CNY holidays, aluminium smelters continue to operate, but downstream plants close. Similar to steel, primary stocks normally rise as a result. Daily primary aluminium consumption in China is over 100,000 tonnes.

Hubei province is not a centre of production for primary aluminium. It has only one small smelter operating with 50,000 t/y capacity. A downside risk is if alumina cannot be supplied to smelters in China, they will have to shut down which would cause severe supply disruptions.

A prolonged demand disruption will result in stocks increasing from already high levels. There are risks that producers will choose to delay ramp-ups if prices are very weak in the coming months due to this suppressed demand.

Bauxite and alumina:
we do not see any significant effect on bauxite and alumina markets, prices remain unchanged. We haven’t received any official confirmation of port closures but any impact to discharge rates would come at a time where there are already delays due to congestion. The latest fall in the aluminium price and the weak demand is a bearish signal for alumina in the near term.

Precious metals: a driver for gold

Gold:
as both a commodity and a financial instrument, gold immediately saw inflows as investors looked for protection from market uncertainty surrounding the outbreak. Stock markets are reacting negatively to the news as there are fears that the virus could hurt China’s growth.

The gold price increase has been moderate compared with other events. The assassination of general Qasem Soleimani earlier this month has had a much greater impact on the gold price than the virus outbreak so far.

Phosphate:
China is the largest phosphate producer, consumer and exporter of phosphate fertilizers, with Hubei province being the base of the industry. Hubei is home to 32% of China’s phosphoric acid capacity and is a leading producer of DAP and MAP.

The downturn in international prices has forced Chinese producers to build up inventories in the domestic market earlier than usual. Transportation during Chinese New Year is particularly limited, reducing the movement of both raw materials and finished products. Lower output through this period is nothing new to the market. Unless the disruption from this virus continues to restrict operations into late-February, CRU sees no dramatic shift in the global phosphate supply and demand balance.

Sulphur:
Hubei province also the largest producer and consumer of sulphur and sulphuric acid in China. On an annual basis, Hubei accounts for ~16 Mt of supply and 20 Mt of demand. Hubei sources sulphur from coastal refineries and Yangtze River ports; sulphuric acid from neighbouring Anhui and Jiangxi, with pyrites ore from southern China.

The reliance on raw material inflows poses the greatest risk to the ability of phosphate operations to run normally. The main threat is getting the workforce back to operations. The continued supply of raw materials for phosphate fertilizer production will be another risk to watch.

Urea:
Hubei is of limited importance for Urea, accounting for less than 2% of China’s 2019 capacity. Domestic prices have declined, reflecting lower demand as a result of the virus adversely impacting application work in northern China and resin demand in industrial zones. If urea plants restart and there are no restrictions on transportations while domestic demand is weak, opportunistic Chinese exports are a possibility.

Ammonia:
Most of China’s domestic ammonia plants are dedicated to downstream urea production. Therefore, the overall ammonia supply-demand balance is mostly unaffected by integrated plant shutdowns. On the other hand, Chinese ammonia import expectations could be at risk as a result of lower merchant demand for non-urea uses. The port of Caojing, close to Shanghai where logistics restrictions are in place, is the major port of entry for ammonia used in industrial production of acrylonitrile and other petrochemicals. If industrial production is depressed for an extended period of time or completion of the new terminal at Lianyungang is delayed, Chinese ammonia imports could be even lower.

CRU is monitoring the situation closely as the story continues to develop. Subscribers to CRU can visit CRU Online for the latest development on how the outbreak affects your commodity. To become a subscriber complete the fomr below and a member of our team will contact you.