CRU Economics ran its fourth annual survey to gauge our clients’ expectations of economic conditions for 2020.

We elicited responses across CRU’s full product portfolio and received information from 182 clients, working in 41 different countries. This feature presents the results of the survey, alongside our own expectations for the economy in 2020.

Policy uncertainty remains a top risk as we enter the 20s
Compared to the survey on 2019 economic conditions, our clients seem to be generally less worried as we enter the new decade.

There was a high level of policy uncertainty during 2019 that spanned the range of fiscal, monetary, trade and other commercial measures. As China’s economy began to slow, the rest of the world wondered whether China would raise government spending, as it had done in the past when growth slowed. It seemed that from one day to the next, US President Trump would tweet a new direction for trade policy whilst his conflict with the Democrats in the US House of Representatives thwarted a potential infrastructure bill. The exit of the UK from the EU, the first of its kind, weighed on European growth. Finally, higher emissions standards depressed vehicle demand and production in the US, China and India.

In the graphic below we present our clients’ views of the top five downside and upside risks to global growth in 2020. Clients were asked to choose up to three options from ten suggested issues. 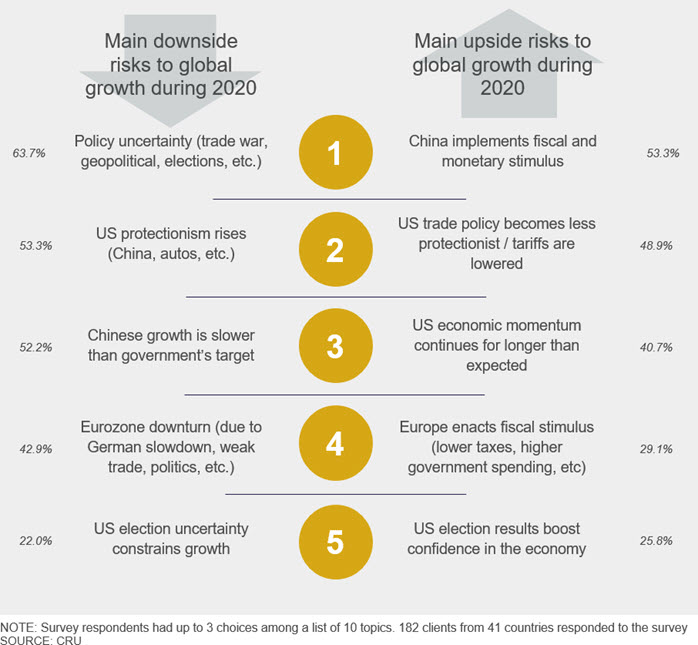 The downside risks to growth for 2020 are not dissimilar to those expressed in 2019: policy uncertainty, trade protectionism and slower growth from the world’s major economies.

The upside risks are almost a mirror to these, with a potential fiscal stimulus in Europe, lower tariffs and a stronger US economy countering the downside potential.

The risks not captured in these Top 5 include a potential US recession (21%), the uncertainty related to Brexit (14.3%) and, marginally (<5%), emerging market currency contagion, monetary policy, and higher oil prices. However, in the free text box, several respondents suggested climate change and environmental constraints as possible downside risks to global growth. This last point is a sentiment that is gaining traction, particularly after worldwide automotive production plummeted in 2019, in part due to new emission standards.

Overall, the Top 5 downside and upside risks highlight the weight of US trade policy, Chinese growth and monetary policy in the fortunes of the global economy.

Q & A session with our clients

What is your forecast for global GDP growth in 2020?

Moderately slower than 2.5%. CRU Economics estimates the global economy expanded by 2.5% in 2019 and we project it will grow at about the same rate in 2020. While 32% of the survey respondents agreed with our forecast view, the most common response (42%) anticipated the rate of global GDP growth would be slightly slower than 2.5%. Our clients seem to expect that the downside risks are more likely to emerge than the upside potential of those same factors.

As has been the case for some time, CRU Economics forecasts higher growth coming from emerging markets in 2020, accelerating from 3.9% in 2019 to 4.3% this year. In 2020, the spurt in growth is not expected to come from China, but rather the rest of Asia – primarily India – as well as South America. By contrast, we expect GDP growth in advanced economies to decelerate further from 1.6% in 2019 to just 1.3% in 2020. 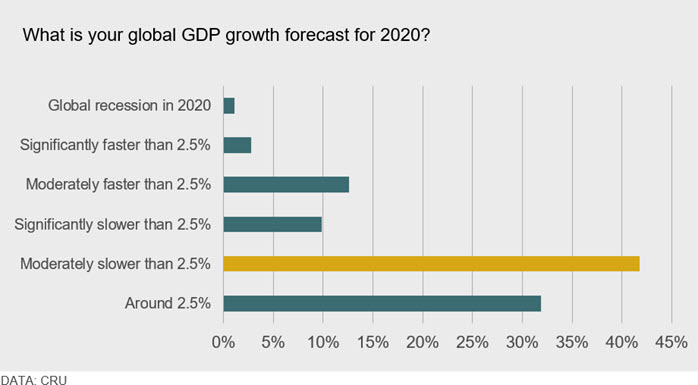 When will the next US recession begin?

At our CRU Breakfast in October 2019, we presented our in-house measure of recession probability, using information from financial market yield curves, which have traditionally been an early warning signal that a recession is coming. In Q3 2019, the likelihood of a US recession in the coming 12 months stood at 40%. After updating the model with Q4 2019 data, the recession probability is now lower at 32%. We attribute this to the Fed rate cuts implemented in September and October as well as the positive effect on market sentiment the US-China Phase I deal has promoted.​ 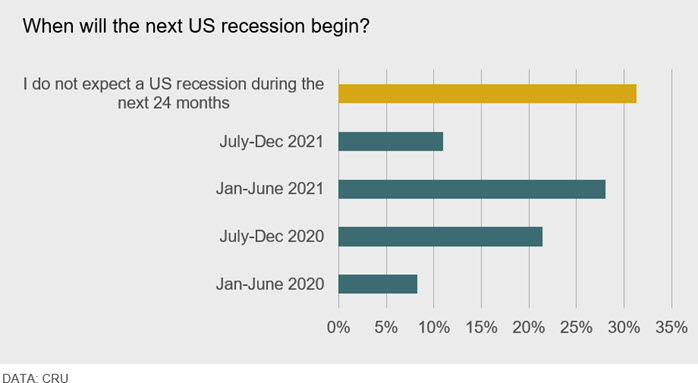 What will be the average EUR/USD exchange rate in 2020?

Broadly Stable. The majority of respondents (51%) expected the EUR/USD exchange rate to remain around the level it was trading in early December when we ran the survey ($1.11$/€ or €0.98/$). Whilst very few respondents believed the dollar would either strengthen further or decline sharply, those who expected a deviation believed it would be towards a moderately weaker dollar compared to the euro. This result shows less uncertainty than last year’s survey where 60% of those surveyed expected a weaker dollar during 2019. CRU currently forecasts the euro to strengthen slightly to $1.09/€.

The value of a currency against the US dollar is very important in terms of forecasting the cost of commodity production and, by extension, commodity prices. Although it is difficult to generalize on the value of “the dollar”, there is currently an underlying risk-off sentiment which is boosting the greenback. In a survey like this, it is difficult to quantify exactly what “the dollar” means. Therefore, we asked clients as to their view on the value of the euro/US dollar relationship since, generally speaking, investors are more willing to hold euros when the prospect of potential returns outside the US are greater. 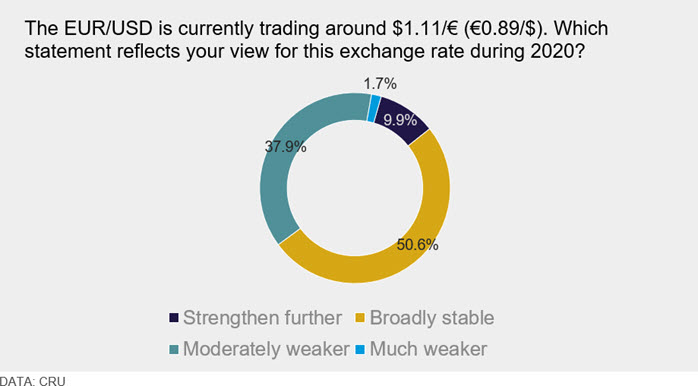 What range do you expect for the average Brent crude oil price in 2020?

$60-69/bbl. The price of Brent crude oil is a bellwether for commodity prices since it reflects a view of global economic growth prospects. We asked clients to choose their expected range for the average of the Brent crude rice in 2020 and, not surprisingly, the majority of respondents (55%) chose the range $60-69/bbl, which reflects where oil has been during most of the latter part of 2019.

Brent crude oil averaged $64.2/bbl in 2019, primarily driven by weak global demand and more plentiful supply outside of OPEC+. CRU forecasts Brent crude oil will average $63/bbl in 2020, reflecting our view that demand growth will remain moderate while the supply side will have difficulty in keeping the market from moving into surplus. Thus, our point forecast for 2020 sits within the range of client expectations at the time of the survey. 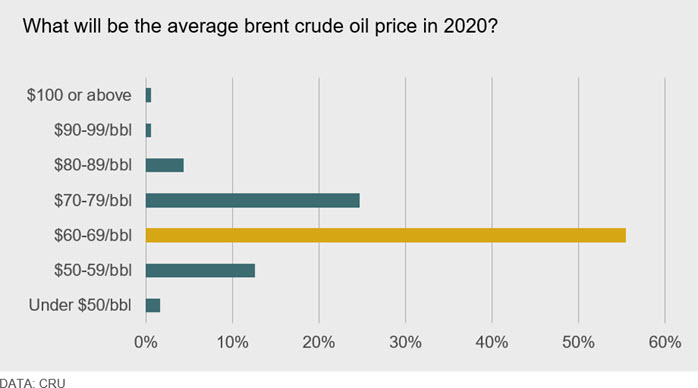 Recent developments present upside risk to the price. The signing of the US-China Phase I trade deal has improved sentiment around global growth prospects and, by extension, future oil demand. In addition, recent tensions in the Middle East between the US and Iran might result in more volatile prices. In an extreme case, crude supply may be impacted – Iran could reduce oil exports to the rest of the world by disrupting the flow of oil through the Strait of Hormuz. This is a powerful strategic weapon since one-fifth of the world’s crude oil, and roughly 40% of Chinese crude imports, come from the Middle East and likely pass through this channel.

Barring a significant supply disruption, it will be a challenge for Brent crude oil to break above $70/bbl and remain there. Back in June, the outage at a major Saudi refinery did not result in a permanent upswing in prices. The same can be said for the market’s reaction to the US killing of Iranian General Soleimani on 3 January. For prices to move higher, market sentiment needs to shift from perceiving the upside to demand to be less than the risk of greater supply. Put another way, market participants need to believe that market deficits are more likely to develop than market surpluses before their outlook on prices changes.

What is the most important theme CRU should focus on in 2020?

Trade war, including auto tariffs. We asked clients what they thought would be the key themes driving macroeconomic conditions in 2020. We asked this question, which is different to the view of risk around economic growth, so that we have a steer on what longer-term research our clients would like to see from CRU. 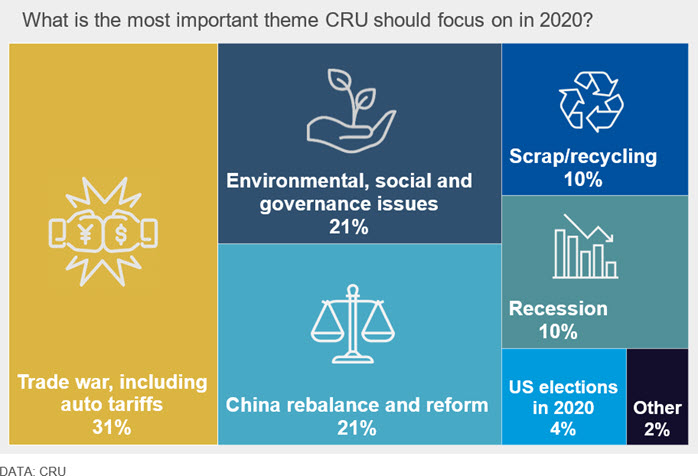 The graphic reflects the prominence of trade protectionism, China’s pace of growth and environmental, social and governance policies. Lesser concerns are the US general election and a potential recession.

As a result of client opinion, we are preparing a plan for our upcoming Special Features, with the prospects for US-China decoupling as the focus in February.

We appreciate your taking the time to respond to our survey and look forward to addressing the range of issues and risks that you, our clients, see as critical to your decision-making process in the coming year.