COP21, Climate Policy and Competitiveness in Steel and Base Metals


Climate change has emerged as a major international policy issue, with the signing of the Paris Agreement in December 2015. The agreement, which came into force in November last year, signals accelerating future regulatory changes, impacting industrial competiveness in the mining and minerals sectors.

Understanding and adapting to these will be increasingly critical for financial performance among miners and metal producers, as well as their suppliers and investors. In this article, CRU uncover a set of commercially significant, but highly complex, market and financial impacts from a carbon price on the steel and aluminium sectors.

…with important, but complex, impacts on ferrous and base metal demand. Stricter vehicle efficiency standards are driving around two-thirds of aluminium demand growth in the US and Western Europe (CRU Aluminium Market Outlook, October 2016); while renewable energy technologies, such as solar PV, for example, are significantly more aluminium intensive than conventional generation technologies. However, these changes (and longer term increases in recycling rates) may hold back demand for other primary metals.

Climate change policies will also impact industrial cost competiveness… A rapid reduction in greenhouse gases (GHGs) implied by the Paris Agreement will likely require an increase in the price of carbon- based energy sources in order to encourage investment in higher efficiency plant and processes as well as switching to cleaner fuel inputs. These changes have potentially broad market impacts ranging from mining and refining through to mid and downstream processing as well as shipping.

… adapting to these issues will be increasingly critical for financial performance among miners and metal producers, as well as their suppliers and investors. Higher energy costs will impact some producers, segments of the value chain, and regional markets differently.

Understanding these changes will be increasingly important to value generating portfolio, investment and operational management decisions.

In this article, CRU uncover a set of commercially significant, but highly complex, market and financial impacts from a carbon price. In the first such study of its kind, based on detailed mine level data, we analyse the financial impacts of a $30 tonne (t) of carbon dioxide (CO2) global carbon tax on ferrous and base metals. In Aluminium production, for example, this is shown to increase overall costs by around $450/t, equivalent to a roughly 30 percent increase in the 2015 sale price.

Countries and regions have set challenging objectives to reduce GHGs…More than 55 countries have ratified the Paris Agreement to date, and are at various stages of designing and implementing plans for reducing their greenhouse gas emissions. Table 1 provides a high level summary of some of the major objectives and established to date across major metal and mineral producing countries.

…and are now in the process of implementing the required policies, including an emerging trend towards “pricing carbon”. The pace of regulatory and fiscal change affecting energy and other sources of pollution has accelerated in recent years: 22 new regional and national carbon pricing regimes have been implemented since 2010 (World Bank, 2016). With most major markets now progressing carbon pricing reforms (see Figure 1), the climate change debate is becoming a commercial reality. 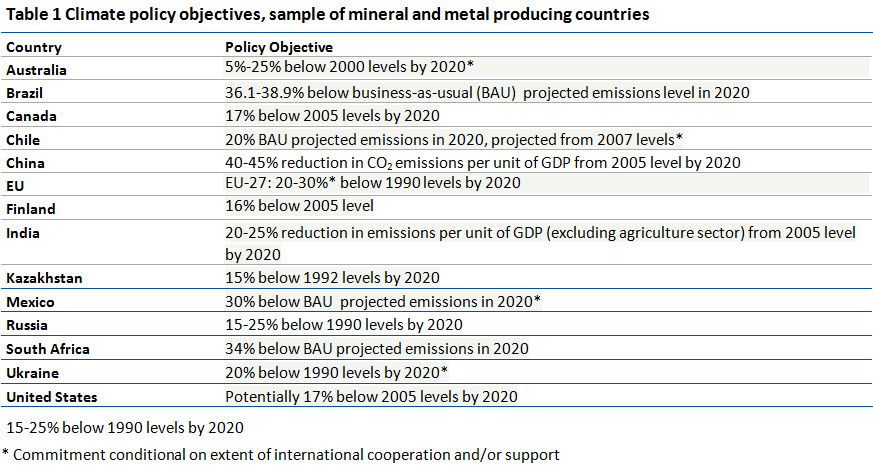 A scenario-based approach to financial and commercial risk analysis is appropriate, given the long term and uncertain nature of policy frameworks. By way of a simple introduction to this complex set of financial and commercial issues, we here simulate the impact of a global carbon tax of $30 tCO2 on industry costs and financial performance throughout the production chain for key ferrous and base metals. 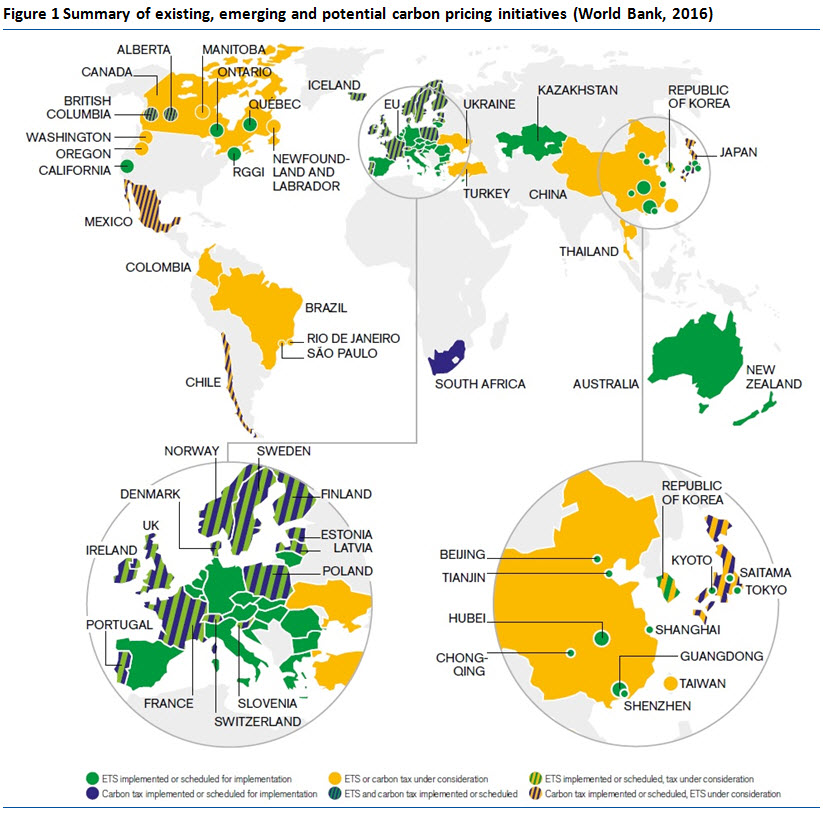 Energy is critical to both production and processing in the mining and minerals sector… Carbon pricing has the potential to inflate production costs throughout the value chain, from upstream mining, processing and refining through to downstream processing and shipping.

…thus full chain analysis is needed to properly appraise commercial risk. In the first analysis undertaken of its kind, we undertake a comprehensive simulation of the potential impacts of a global carbon charge on Aluminium and Steel production – implemented across the production chain.

….but are subject to considerable variation across regions and producers. The high carbon intensity of power production in China, for example, is shown to present a particularly material commercial risk: overall costs are estimated to increase around $450/t, equivalent to around a 30 percent increase in the 2015 sale price. 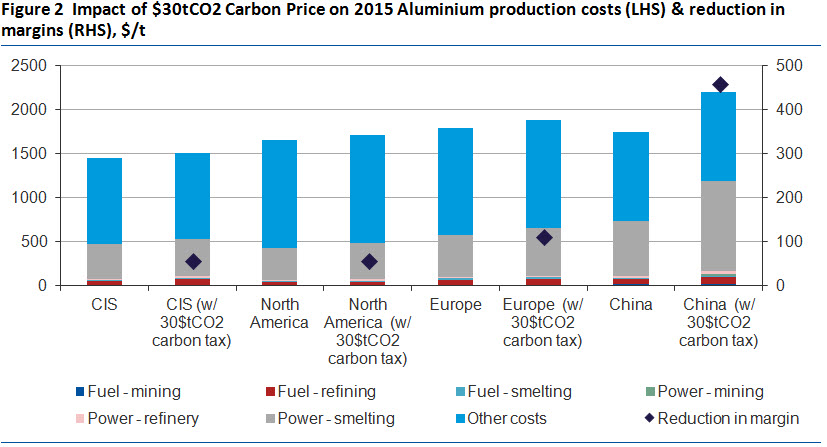 Steel production
At an industry level, the implications for Steel production costs are potentially highly significant. Figures 3 and 4, for example, summarise the impact of a $30tCO2 tax levied on a sample of 115 hot rolled coil (HRC) and 76 rebar mills respectively, considering the inflationary pressures on both iron ore mining, together with those on metallurgical coal and other key energy inputs.

Once again a carbon tax is found to have the potential to impact the relative competitiveness of international producers…. Under this scenario, the “average” HRC producer in the CIS region is shown to have a strong competitive position relative to those in Europe. Moreover, a full chain analysis highlights a lower exposure to carbon policy risk in CIS than is observed in China, for example, due to the heavy dependence on coal based energy.

…however, differences in production technology result in substantial heterogeneity in exposure to policy risk across regions. For example, relatively high cost HRC producers in the US are subject to a lower potential carbon tax incidence – equivalent to around $12-13/t – compared with Europe and particularly China, due to the prevalence of significantly cleaner Electric Arc Furnace (EAF) technologies in the production of flat products (relative to Blast Open Furnace (BOF)) production). These divergent impacts are also identifiable in the case of Rebar production (see Figure 4) which are primarily manufactured via the EAF in the US and Europe, but by BOF in China (a mixture of the two technologies are employed in CIS). 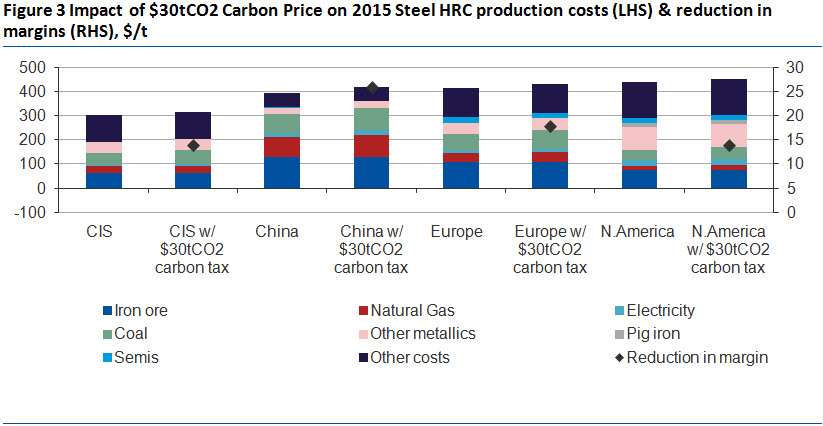 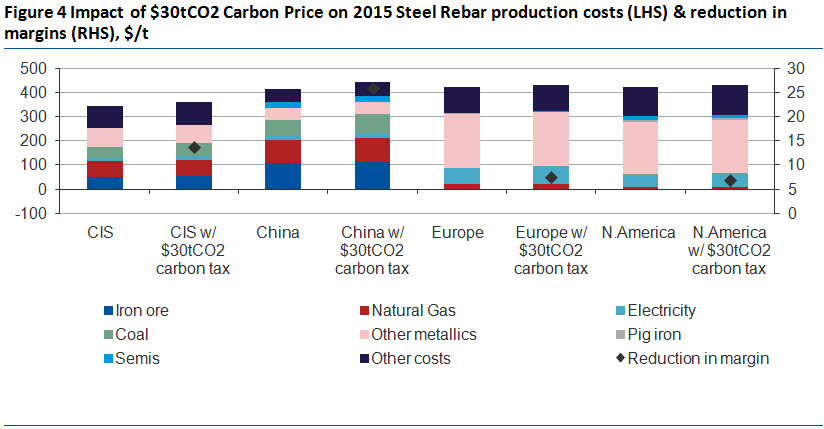 Our preliminary analysis suggests that the effects of carbon pricing on economic and financial performance are commercially material, but likely to be highly heterogeneous across commodities, regions, segment of the value chain and site.

Given the complexity and uncertainty surrounding this long term issue, rigorous scenario analysis is desirable to properly appraise commercial risks across the value chain under different potential future policy and market conditions.

Key questions and considerations which are relevant to properly understanding (and planning for) the strategic implications of these policy issues – through the design and analysis of robust scenario – include:

See all of our consultant team