Is 2017 a turning point for West African fertilizer demand?


New investments in fertilizer projects in Nigeria are adding substantial production capacity to the West Africa region. However, CRU forecasts growth in fertilizer consumption will lag far behind supply growth over the next five years, and we expect a significant share of new supply to be exported out of the region.

A huge amount of potential demand is waiting to be unlocked in West Africa, but a number of obstacles need to be overcome before local farmers are in a position to increase fertilizer application rates. In 2017, there are signs that real steps are afoot to diminish some of these obstacles with possible upside potential for regional fertilizer consumption growth.

Crop yields in West Africa are exceedingly low by international standards. The large majority of farms are owned by smallholders: often single families growing food crops for subsistence and occasionally cash crops to sell at market. These farms tend to be rainfed, with insufficient water management and little or no irrigation; seeds used are often of poor quality; farming techniques are outdated and inefficient. Perhaps most significantly, these farms use little, if any, fertilizer. CRU Consulting estimates that fertilizer application rates in West Africa averaged only a tenth of those in Western Europe in 2016.

With 32.5 million people in the region classified as undernourished by the FAO, and a significant proportion of the region’s food being imported, there is an urgent need to increase farm output. Developing the agricultural industry is a critically important step towards stable, long term economic development. For a region that contains ten of the poorest 25 countries in the world, the importance of agricultural development cannot be overstated. 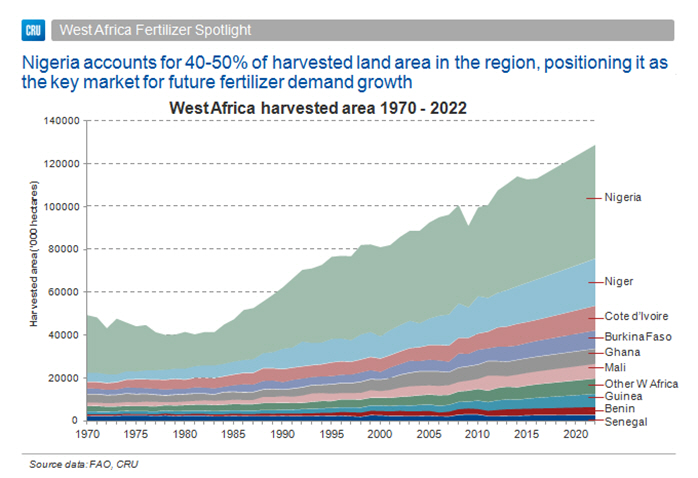 Increases in West African agricultural production in recent years can largely be attributed to expansions in the harvested arable land area, but the limits of this are being reached. In order to continue increasing crop production, farmers in the region will need to focus on increasing yields. While adoption of higher yielding varieties of seeds can go some way towards achieving this, there is an unavoidable and urgent need to replenish soils which have been mined of their nutrients for decades through intensive crop cultivation. Without nutrient replenishment through balanced fertilizer application, low nutrient levels in West African soils will continue to represent a severe limiting factor on regional crop yields, food security and sustainable economic development.

There is a network of fertilizer blending sites throughout the region with the ability to process imported fertilizer products into balanced NPK blends. Here too, Nigeria is home to the most developed industry, with more than 30 blending operations throughout the country. Mali, Ghana and the Ivory Coast also have several blenders each; Burkina Faso and Togo have one each.

However, much of the blending capacity in the region has until recently remained idle; in fact, many of the plants have never reached active production. In many cases, the blenders have been inactive for so long that the equipment has deteriorated or become obsolete. Significant investment is required to reactivate production at these facilities. 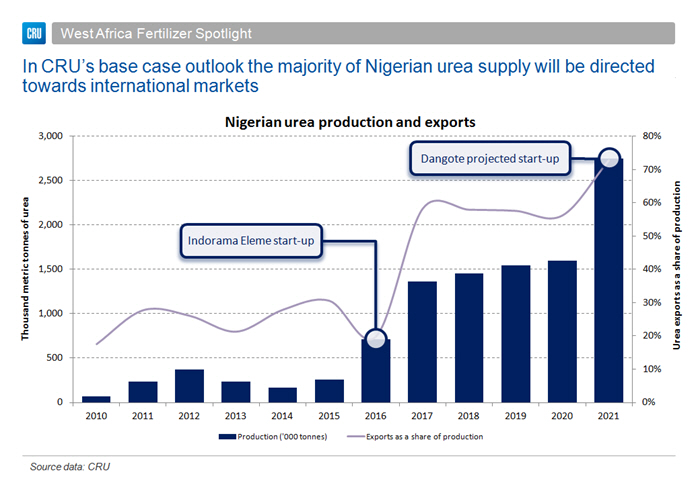 Despite the pressing need for increased fertilizer consumption in West Africa, a significant proportion of the fertilizer currently produced in the region is exported. Since 2010, CRU estimates that almost 25% of Nigerian urea production has been exported, mostly to South America. As Nigerian urea production is forecast to grow strongly over the next five years, CRU estimates that over 70% of output will be exported by 2020. These forecasts point to obstacles to demand which are not strictly supply related.

However, the greatest obstacle to West African fertilizer demand growth is the cost of the fertilizer itself. In West Africa, up to 50% of the cost to the farmer of a 50kg bag of fertilizer comes after the bag has left the factory gate. For imported product in the region, beyond the cost of production and shipping to West Africa itself, there are four main components that continue to increase costs for farmers: port charges, inland transportation costs, marketing and distribution costs, and finance costs.

Each of these factors has the effect of raising the real cost of fertilizers to farmers in West Africa to a multiple of the cost faced by larger farmers with greater resources elsewhere in the world. Numerous government subsidy programmes have been implemented in an attempt to counterbalance these additional costs. They are a staple of the region, commanding large portions of governmental budgets. Despite this, many are poorly structured and underfunded.

Without the proper administrative structure, subsidy schemes are unable to properly target farmers who need the most support.

Along with an inability to track where the subsidies are truly going, the broad stroke approach to subsidies can result in many cases of leakage within systems. Extremely slow repayment of distributors after they’ve sold product at the subsidised price to farmers only incentivises them to raise prices to shield themselves from risk, which in turn contributes to raising the true cost to farmers.

However, after years of constrained growth in West African fertilizer consumption, there are hopeful signs that progress is being made in addressing some of the obstacles. The most obvious sign has been investment in local fertilizer production capacity. Following the recommencement of West African urea production by Notore Chemicals in Nigeria in 2009, there has been a trickle of announcements which promises to turn West Africa into a major fertilizer producing region. While this does not guarantee an increase in regional growth in fertilizer consumption, improved availability of product locally is the first step in reducing the cost of fertilizers.

Since Notore’s move, Indorama and OCP are the two global players who are now leading the way with investments in regional supply. They look set to challenge Yara as the leading international supplier of fertilizers in the region. With sales offices in Ghana, the Ivory Coast and Cameroon, Yara has for decades demonstrated a strong commitment to developing fertilizer markets in West Africa through programmes like the Ghana Grains Partnership and the Agricultural Growth Corridors initiatives. Its multinutrient NPK fertilizers are an effective method of delivering balanced fertilization in the region, particularly considering the logistical challenges of delivery, synchronised shipments of N, P and K fertilizers individually, and in the absence of operational NPK blending capacity.

Indorama is responsible for the second – and now largest – urea plant in the region, which commenced production and sent its first export shipment in July 2016. After some teething issues with the new plant and a brief halting of exports, production is back on track and approaching nameplate capacity. In 2014, Indorama also acquired a 78% majority stake in Senegal’s ICS operation, the region’s only phosphate fertilizer plant. At the time of the acquisition, ICS had shut down its granulated fertilizer production operation. This has now been reactivated and the facility has become an important supplier of compound NPKs to the local market as well as to land locked Mali and Burkina Faso.

Meanwhile Morocco’s OCP, the world’s largest phosphate producer, has been active in announcing and implementing ambitious investment plans for West Africa. Evidently recognising the strong potential for fertilizer demand growth, the company has dedicated one of its recently completed Jorf Lasfar hubs, the “Africa Fertilizer Complex” to supplying African markets. In support of this initiative, the company announced in 2016 the establishment of ‘OCP Africa’ which is tasked with developing agricultural markets across the continent. Thirteen subsidiaries are being opened across Africa including subsidiaries in the Ivory Coast, Senegal, Benin, Cameroon and Ghana – a clear commitment to the demand potential in the West Africa region.

OCP has since been highly active in making supply and cooperation announcements which suggest major impact on West Africa fertilizer markets. It agreed in December 2016 with Fertilizer Producers and Suppliers of Nigeria (FEPSAN) and the government of Nigeria to supply phosphate fertilizers to Nigerian blenders in 2017 for the production of 1 million tonnes of NPK blends. It is planned that the agreement will significantly reduce the price of fertilizers on the Nigerian market and reduce or remove the need for government subsidies. Already in July 2017, the agreement has had the effect of re-activating 12 of 28 idle NPK blending plants in the country, and 20 million 50kg bags of fertilizer are expected to be distributed by the end of December 2017, portending a sharp increase in fertilizer consumption. OCP has signed a similar Memorandum of Understanding with the Republic of Guinea, gifting 20,000 tonnes of fertilizer and supplying 80,000 at prices which will reduce or eliminate govern-ment expenditure on fertilizer subsidies in the country.

However, of greater significance to the development of West African fertilizer markets are signs that the company’s plans go further than simply supplying Moroccan produced fertilizers to local importers. In May 2017 it was reported that OCP has plans to construct a fertilizer storage and blending unit at the port of Abdijan (Ivory Coast) which will act as a sub regional distribution hub. OCP has also announced plans to set up ten new "farmer house" centres across Africa by 2020. The strategically located centres are designed to make available the products and services that small farmers need to develop their business in a sustainable way. Key objectives of the centres are to promote innovation and encourage good agricultural methods. One of the first centres will be inaugurated in the Kaduna region of central Nigeria.

While evidence of the effectiveness of such centres remains to be proven, they demonstrate recognition by international producers of the obstacles to higher application rates. Coupled with ongoing supply efforts in the region, these new investments appear set to significantly reshape West Africa fertilizer markets in 2017 and beyond. If successful, these efforts have the potential to lend significant momentum to abolishing some of the main obstacles constraining fertilizer demand in the region. There could be enormous benefits to crop yields, food security and ultimately sustainable economic development in West Africa.

See all of our Consulting team