Facilitated by advancing technology and the rising affordability of green technologies, we are seeing structural changes to both electricity generation and transport solutions based on new green policies that sit front and centre in discussions across the world at levels from international to city mayoral. Ownership of electric vehicles is no longer a specialist pastime, it is becoming an urban middle-class aspiration.

In particular, in India the automotive industry seems to be at an inflexion point. The Government of India has designated electric vehicles as its sole choice for mobility in 20301. This paper analyses the implications for the commodity markets involved in delivering this goal.

The Indian automobile industry has grown tremendously
0.9 million (mn) cars were manufactured in India in 2000, of which one-third were exported. Car production grew at a cumulative annual growth rate (CAGR) of 11% in the period 2000-2010, to 2.6 mn. However, demand growth was much faster, at a CAGR of 13% in the same period, with exports also growing at a CAGR of 4.3%. 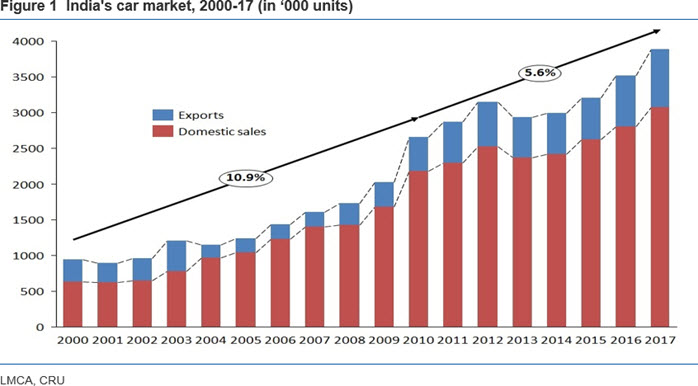 Rising income levels imply strong growth potential
The global automobile market is dominated by China and USA, which together account for half of the sales and production. India is currently ranked fifth.

However, looking ahead, India is expected to grow much faster than some of its peers. India’s car ownership is currently very low at 32 units per 1000 people of working age (WAP)2 which is significantly below developed economies, where ownership rates are typically around 600 units per 1000 WAP. Notable deviations from the ownership norm are seen in the USA, Saudi Arabia, UAE and Hong Kong and reflect country-specific geographic and cultural factors.  China’s GDP per capita is towards the low end of the range in which car ownership rates increase rapidly– India on the other hand is yet to enter the circle. 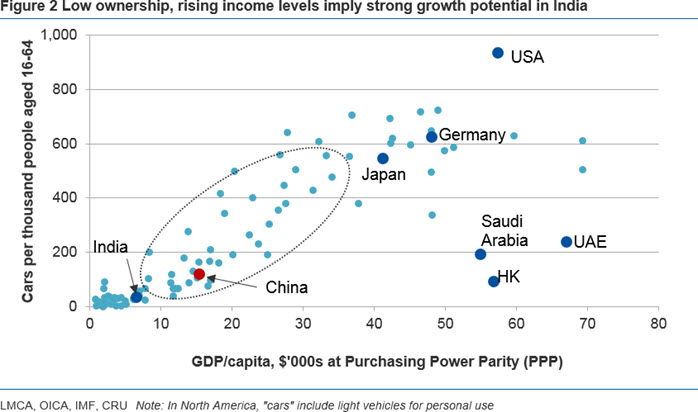 Which commodities will be needed to build these cars – if they are all electric?
The vision of an all-electric fleet could be assumed to mean that the electric cars will be able to match current conventional vehicles in performance and convenience. For example, at present, the electric models offered by Mahindra and Mahindra (M&M) – sole electric carmaker in India – severely lag the conventional cars in performance.

From Table 1, it is clear that the 14.4 kWh size of current lithium-ion battery (LIB) in EVs in India would need to become much bigger and powerful in the future. As such, we expect the electric cars in 2030 to be equipped with batteries of at least 40-60kWh size. The cathode chemistry of the lithium-ion battery also impacts performance – we consider this in a later section.

An all electric fleet in 2030 will need batteries from 14 Gigafactories
In a scenario in which all cars produced in India in 2030 are battery-electric vehicles – the ‘Colossal, Green’ scenario – we expect energy storage demand to be 480 GWh. Tesla’s Gigafactory 1 in Nevada, USA has a capacity of 35 GWh – as such, India will need 14 “Gigafactories” to fulfil its demand for lithium-ion batteries from cars alone.

An additional demand of 130 – 170 GWh could be generated from all two-wheelers going electric – equivalent to capacity of 4-5 Gigafactories. This can be even higher if swappable batteries becomes the business model for electric two-wheelers.

However, we currently consider the case of all cars produced in 2030 being fully electric as overly ambitious, and therefore also model a scenario we consider more practical – we still assume India achieves electrification of its fleet in 2030 but define4 it as half the cars produced being hybrid electric vehicles (HEVs), with a quarter each being plug in hybrids (PHEVs) and battery EVs (BEVs). In this scenario – the ‘Steady, On Course’ scenario – the required LIB capacity would be 170 GWh or equivalent to 5 Gigafactories.

Though the renewable energy sector is out of the scope of this report, India has an ambitious target for solar and wind capacity installation. Thus, it is important to mention that if renewables are to gain a substantial share in power generation, the issue of intermittency of production will have to be addressed, which will increase demand for energy storage (and thus lithium-ion batteries) further.

NMC and NCA are the future battery chemistries for cars
Electric car performance is dependent on the characteristics of its lithium-ion battery – high energy density and high electric potential are desirable. LFP cathodes, currently used in electric vehicles in India, will need to be replaced with more powerful and energy-intensive NMC cathodes. We present our commodity forecast assuming this substitution to have occurred in India in 2030. 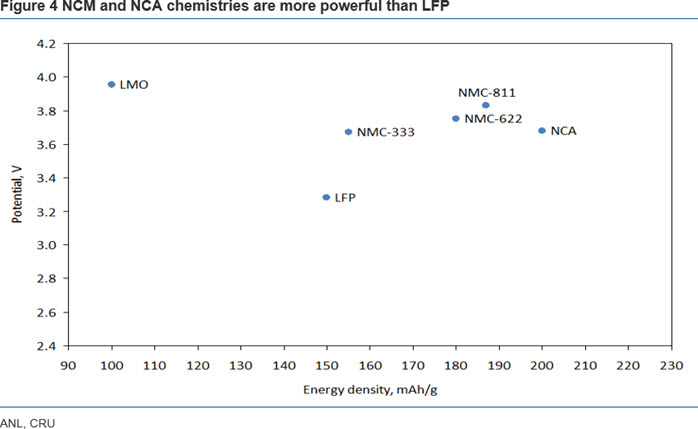 Lithium, cobalt and others: Achilles’ heel?
Assuming all the demand for batteries in India in 2030 is met through domestic production, 306 kt of lithium carbonate equivalent (LCE) would be demanded in the ‘Colossal, Green’ scenario. This demand would be equivalent to 1.4 times the global production of lithium in 2016. In the ‘Steady, On Course’ scenario, the requirement would be 110 kt LCE of refined lithium, or half of global lithium production in 2016. India does not have any domestic lithium resources or refining capacity.

Similarly, refined cobalt demand would be 70 kt contained cobalt in the ‘Colossal, Green’  scenario or 25 kt contained cobalt in the ‘Steady, On Course’  scenario. Refined cobalt demand in 2030 in the Colossal, Green scenario would be 1.8 times the total consumption of cobalt in LIBs globally in 2016, including those for electronic and other applications. In the ‘Steady, On Course’ scenario, cobalt demand would be two-third of 2016 consumption in LIBs. According to the Indian Bureau of Mines (IBM), India has no reserves of cobalt5. It lists some resources in Odisha, though no information is available on their economic viability. 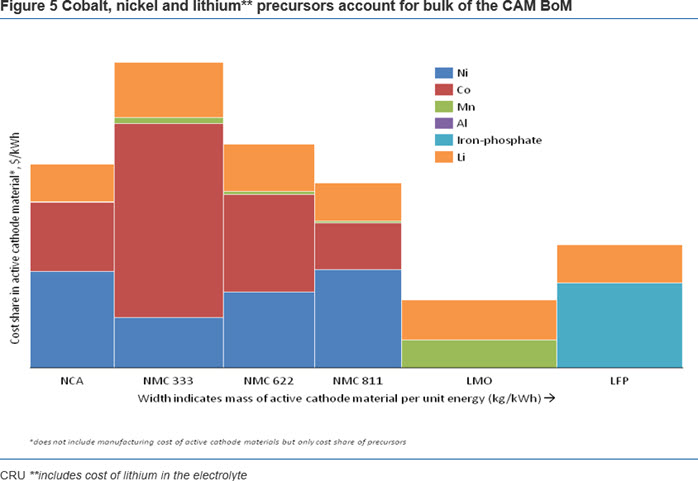 CRU uses its Battery model to track the cost share of each metal precursor in the bill of materials (BoM) for cathode active material (CAM). Cobalt, nickel and lithium precursors account for the bulk of these costs – cobalt’s cost share is disproportionate to its weight share in the CAM. This is expected, given that cobalt’s price is 1.5 times that of lithium and 4 times of nickel. Its current price in September 2017 is already 120% higher than its average price in 2016.

India has no reserves of nickel either, though the IBM again reports some resources in Odisha – the same ores with which the cobalt resource mentioned above is associated. Though some limited refining capacity exists for both nickel and cobalt in India, these do not produce battery-grade material.

Overall, this could mean an import bill of $18 billion in 2030 in the ‘Colossal, Green’ scenario, and $7 billion in the ‘Steady, On Course’ scenario for minerals of lithium, cobalt and nickel. The value would be higher if these are semi-processed, refined materials or in the form of precursors.

Other challenges
Beyond the lack of strategic mineral resources for an electric future, India faces several other challenges, some of which are listed below although this is limited to those impacting metals commodities:

Conclusion
India’s statement of intent to go fully electric is laudable for the positive impact it will have on our environment and reduction in our oil dependence. However, it faces several challenges, including the lack of key mineral resources like lithium, cobalt and nickel. Security of supply of these minerals will be central to assuring that the path to an electric future does not hit a roadblock. But this challenge also offers significant opportunities for India’s private sector – the journey of lithium from a salt lake or of cobalt associated with a copper or nickel ore to the powertrain of an electric car is a long one.

See all of our technology metal analysts