Aluminium industry leaders gathered at the US Department of Commerce on 22 June 2017 to present their testimony. There is great uncertainty surrounding the issue of Section 232, but in light of the testimony CRU believes that, if action is taken, it will be a broad based tariff applied to both primary and semi-finished aluminium products.

In this analysis we present four potential scenarios where tariffs are imposed and we discuss the implications for the aluminium industry value chain.

The investigation
When industry leaders gathered at the US Department of Commerce (DoC) Auditorium on 22 June 2017, they presented testimony to aid the DoC in determining whether imports of aluminium threaten to impair the national security of the US.  This hearing followed a memorandum signed by the President on 27 April directing the Secretary of Commerce, Wilber Ross, to proceed expeditiously in conducting his investigation and submit a report on his findings to the President.  Per the rules of 232, the DoC has 270 days to submit their report to the President, putting the hard deadline at 22 January 2018.  During the hearing, thirty-two industry representatives across the aluminium value chain presented testimony to illustrate their view on the pending investigation.  In addition, another 88 companies, associations, and governments filed written testimony for the DoC’s consideration.  Even with so much uncertainty regarding the potential actions, it seems clear that the decision will be one of or a combination of the following:

If imports are restricted via tariffs and/or quotas, there is still a set of important questions that must be answered:

For the purposes of this analysis, we’ll focus our scenarios on potential tariffs given the ambiguity of any potential import quota.  In addition, all scenarios will exclude Canada from any action given the following reasons, which illustrate how inter-linked the two countries are:

Implications of a 25% tariff on primary aluminium:
In this scenario Russia and the UAE, which accounted for nearly 30% of all US primary aluminium imports in 2016, have the most to lose.  The US has become an attractive market for primary aluminium exporters with regional premium differentials between $57-$75/t in favor of the US when compared to Europe and Japan respectively during 2Q 2017.

It’s not realistic to assume that all imports from these countries would come to a halt, but it is likely that imports would reduce as Canada capitalizes on the opportunity to regain lost market share, as shown in Chart 1 above.

Impact to Primary Aluminium Producers:
It’s safe to assume that any trade action taken on primary aluminium would lead to a short-term rise in LME aluminium prices based on speculation of a tight market.  The bigger impact, however, would come from higher Midwest ingot and product premiums as Canadian suppliers look to capitalize on a closed arbitrage window.  It’s conceivable to think that the application of a 25% tariff on primary aluminium would result in a fundamental change to the Midwest premium, taking the form of a “duty paid” premium similar to what exists in Europe.  Using the below calculation, a duty-paid Midwest premium would provide significant benefits to domestic US (and Canadian) primary aluminium producers, in excess of $400/t assuming a $1,900/t LME price, current Midwest premium of 7.8¢/lb less freight, and a 25% tariff.  This could certainly encourage restarts and/or ramp-ups at curtailed or underutilized smelters. 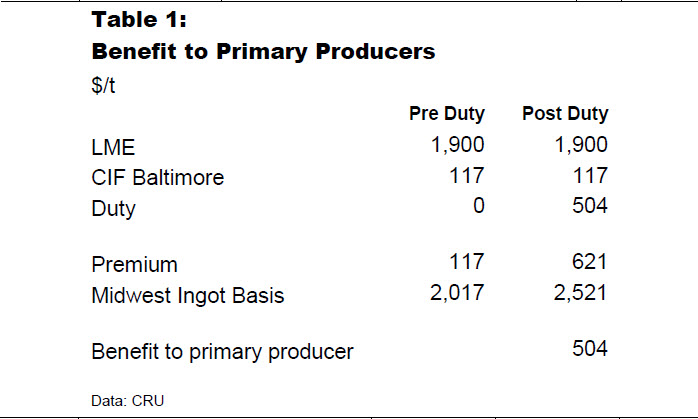 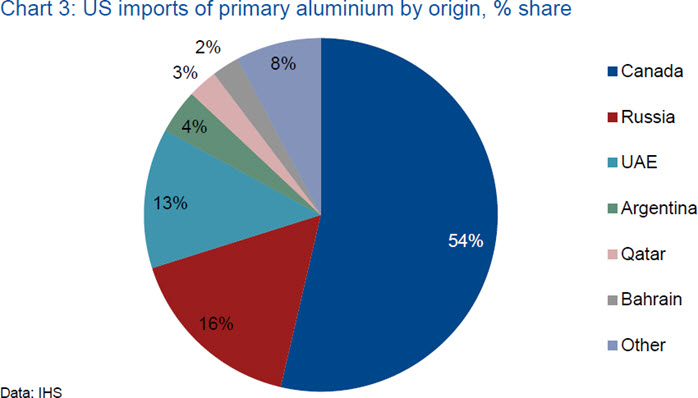 Impact to Downstream Aluminium Manufacturers:
A tariff on primary aluminium alone would be devastating to the downstream aluminium industry.  A simple calculation below illustrates how a tariff applied solely to primary aluminium would increase raw material costs for downstream manufacturers, further weakening their ability to compete with low-priced imports. 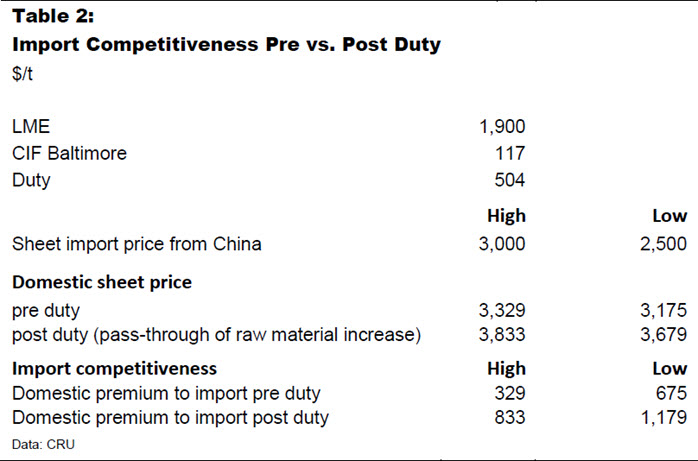 Implications of a 25% tariff on primary and semi-fabricated aluminium:
China supplies 31% of all semis imports to the US, most of which are flat rolled products which will be discussed in Scenario 4.  Aside from China and Canada, the semis market is much more diversified, which spreads the impact across a larger set of countries and manufacturers.  It goes without saying that any tariff on semis is a direct shot at China, but one that would be necessary to save the US downstream industry in the event tariffs are placed on primary aluminium.

Impact to Downstream Aluminium Manufacturers:
As can be seen in the below table, a duty applied to semis in addition to primary aluminium provides relief to domestic downstream manufacturers.  It’s interesting to note the comparison between the benefit to a primary producer vs. a semis producer, especially on lower-priced sheet products where that delta is nearly 2x.  Basically, if you increase semis producers raw materials costs you need to have a higher duty on semis imports to give them the same benefit as a primary producer. 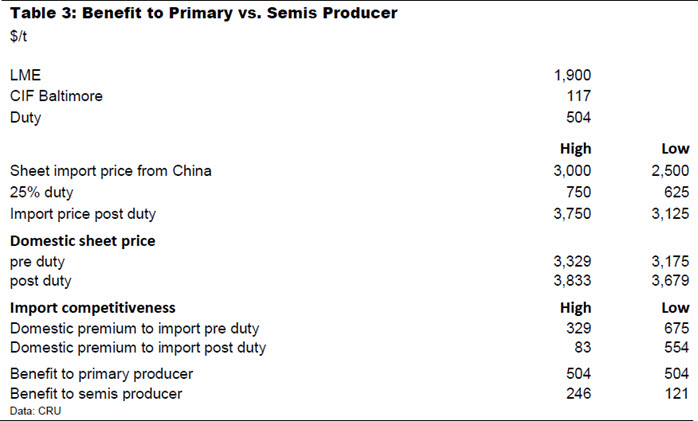 Scenario 3: Import tariff on all semi-fabricated aluminium products from China

Implications of a 25% tariff on Chinese semis:
97% of the Chinese semis imports are flat rolled products (sheet, plate, strip, foil).  Excluding foil for a moment, a sizeable portion of the Chinese imports are general commodity grade products such as 3003 / 5052 “common alloy” coil and general engineering plate.  The price for imported Chinese common alloy coil averages $1.13 per pound, compared to CRU’s June price assessment for domestic coil of $1.44 per pound, a $0.31 per pound advantage for China.  Adding a 25% tariff to imports of Chinese-origin common alloy would result in an imported price of $1.41 per pound, which is almost on par with domestic prices.  This would level the playing field for domestic suppliers of common alloy, and likely push out cheaper imports from China.  This also has the potential to bring back domestic production of common alloy, a product that has been decreasingly profitable, and phased out of several mills as a result.

What about foil?
In 2016, imports of plain aluminium foil from China accounted for 73% of total US foil imports, a figure which has grown from 49% in 2011.  The domestic industry stated that the import surge from China was driven by low import pricing that caused U.S. producers to lose significant sales and profits, according to a news release published by the Aluminum Association.

On 21 April 2017, the US International Trade Commission (ITC) made a unanimous preliminary determination that unfairly-traded imports of certain aluminium foil from the People’s Republic of China are causing injury to US producers. The preliminary injury determination means that the antidumping and countervailing duty cases against imports from China will proceed.  Preliminary determinations for countervailing duties were due on or around 2-June, but were delayed, leaving many wondering whether the proceedings on foil are held up until a decision is made regarding the section 232 case.

For the sake of clarity, we’ll consider any primary aluminium at or above 99.90% of aluminium content to be high-purity.  CRU data suggests that the US imported 43,000t of high-purity primary aluminium in 2016, and is on pace to import more than double that amount in 2017, or an estimated 100,000t, with the majority of the shipments arriving into the US from the United Arab Emirates and Norway.

Century’s Hawesville smelter, with nameplate capacity of 252,000t per year, is the only operating smelter in the US with the capabilities to mass-produce high-purity aluminium.  According to the company’s website, four of Hawesville’s five potlines are specially configured and operated to produce high-purity aluminium with average purity levels of 99.90%, compared to standard-purity aluminium which is approximately 99.70%.  CRU estimates that the US produced 91,000t of high-purity primary aluminium in 2016, 82% of which was produced by Hawesville.  The smelter is currently operating at 40% of capacity, producing an estimated 101,000t of aluminium per year, none of which is high purity according to a statement made by Century Aluminium CEO, Michael Bless in his testimony to the DoC on 22 June 2017, citing competitively priced imports as the reason for ceasing production.

In light of the testimony and the overarching themes, CRU believes that either no action will be taken or that there will be a broad-based tariff applied to both primary and semi-finished aluminium products, excluding Canada.  Country-specific quotas are also likely to be considered, with the potential for volumes being capped at a certain percentage of prior year averages, and then duties applied to any volume exceeding that cap.  It’s also possible that any actions that are implemented could be used as a weapon to bring China to the negotiation table, and then lifted once the two countries arrive at a negotiated solution.

CRU expects to see quick action taken that will likely blanket the vast majority of steel product imports into the USA.  This is likely to include products such as plate, sheet, oil country tubular goods, line pipe, slabs and more.  Some options include creating a ceiling of imports allowed based on the low levels seen back in 2010 and 2011, or simply creating an additive tax on steel imports.  The actions that come will drive steel prices higher by way of new additive taxes or by artificially limiting supply.

See all of our aluminium team