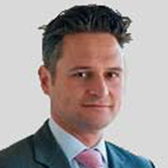 William joins CRU from GUS Holdings, a global higher education provider. Previously, he was CFO at EPG, an education services provider, and prior to that he was Group Finance Director at BPP Professional Education Group for 5 years.

William has over 25 years’ experience working in finance across a variety of sectors, having qualified with Arthur Andersen in the 1990s. Since then he has worked in a number of blue chip organisations including British Airways, Time Warner and Interpublic Group, as well as running his own nursery school business.

William has worked on several corporate transactions, both as an advisor and as a principal. William also has extensive experience of leading teams through change and has overseen a variety of system implementations. He is currently a non-executive director for a chain of nursery schools.

William graduated from the University of Sheffield with a degree in Politics and is a member of the ICAEW.