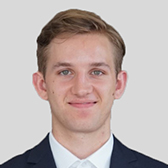 Daan joined CRU Consulting as an intern in July 2020 while completing his Master’s degree, and joined as a full-time Research Analyst in November 2020. He has worked on a variety of projects across CRU coverage, including work on emissions and rare earths.

He holds an MSc Economic History from the London School of Economics, where he focused particularly on monetary and financial history (writing his dissertation on private financial pseudo-monopolies in Hong Kong, 1865 – 1929). He also holds a BA Hons Contemporary Chinese Studies with International Relations from the University of Nottingham, during which he spent a year abroad in Ningbo, China. Previously, he has presented on China’s central bank digital currency at academic conferences hosted by the University of Edinburgh, as well as Xi’An Jiaotong Liverpool University in Suzhou.

Daan has lived in the Netherlands, UK, Singapore, and China, and Spain for a short while as well. He speaks Dutch, English, and is working on improving his Mandarin Chinese and Romanian.