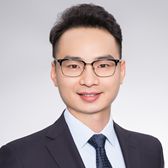 Brian Peng joined CRU in mid 2018 as a cost analyst in the Lead/Zinc team, focusing on the China lead/zinc market, as well as copper and nickel.

Brian is based in our Beijing office.