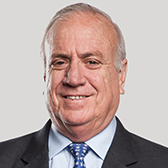 Rodrigo brings more than 40 years of experience in the copper trading market. He has worked in the main world copper producers always on commercial and trading positions.

He started in Codelco in 1976 focused on molybdenum sales and was then appointed as Molybdenum Manager based in London. After Codelco he was hired by Refimet during the construction of the Altonorte smelter with the responsibility of securing feed to the new project as well as in charge of the smelter’s products sales. He then joined Collahuasi for 10 years as VP Commercial and 2008 he moved to Anglo American Chile as Senior Marketing VP. Since 2010 he was the Senior Sales VP of Codelco.

Rodrigo is based in CRU's Santiago office.