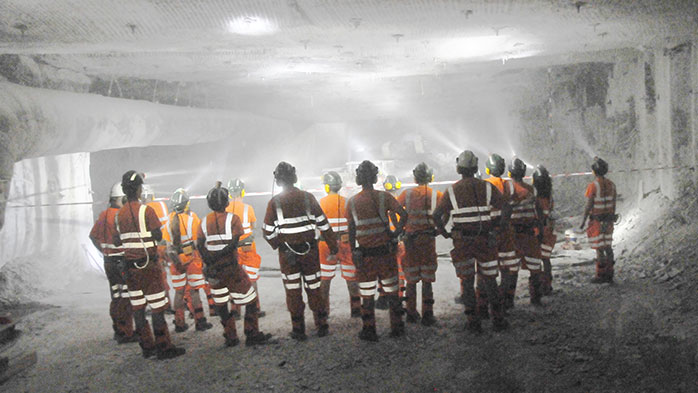 The Boulby potash mine in North Yorkshire, operated by Israel Chemicals Ltd (ICL) since 2001, is set to become the world’s first dedicated polyhalite mine this year as the company phases out potassium chloride production.


Potash Analyst Humphrey Knight and Fertilizer Demand Analyst Rajiv Ram were invited to visit the Boulby site ahead of the most radical restructuring in the mine’s nearly 50-year history.

Potassium chloride and polyhalite at ICL
Potassium chloride (MOP) is the world’s most popular potash fertilizer with global sales totalling about 66 Mt in 2017. ICL is the world’s sixth largest MOP producer, with 2017 deliveries exceeding 5 Mt from its operations in Israel, Spain and at Boulby. Polyhalite is a hydrated potassium, magnesium, calcium sulphate mineral (marketed by ICL as PolysulphateTM) with total global deliveries currently orders of magnitude lower at about 0.3 Mt/y. It is most similar to other potassium magnesium sulphate (SOPM) fertilizers such as langbeinite and schöenite.

ICL’s UK subsidiary, also known as Cleveland Potash, is currently the world’s only polyhalite producer. The company began marketing the mineral as a fertilizer under the brand name PolysulphateTM in 2012 from the Boulby site. To date it has witnessed impressive sales growth of around 50% per year. Nevertheless, the move to dedicated polyhalite production represents significant challenges as ICL bets on increasing PolysulphateTM production to 1 Mt/y by 2020 (with an option of increasing this to 3 Mt/y by 2030) returning the ageing mine to profitability.

With the switch to sole polyhalite production scheduled for July this year, ICL undertook its first PolysulphateTM analyst and media site visit. It provided the perfect opportunity for Potash Analyst, Humphrey Knight, and Fertilizer Demand Analyst, Rajiv Ram, to see what has already changed at Boulby and what challenges remain as the mine undergoes the most radical restructuring in its nearly 50-year history.

Why is the Boulby mine switching to polyhalite?
The Boulby mine has extracted potassium chloride from sylvinite ore in the Zechstein Basin deposit since 1973. At its peak the site had an annual capacity of 1 Mt/y MOP. It is a conventional underground shaft mine which uses continuous mining methods at depths of 800 to 1,350m below surface.

Given the age of the mine, underground workings now exceed 80km in length and extend under the North Sea. Production sites or “districts” can be up to a 15km journey from the shafts. Resulting rising costs and lower MOP prices have resulted in potassium chloride production becoming uneconomical.

The main polyhalite layer underlies the sylvinite ore and was first mined as recently as Q4 2011 with a new access ramp constructed in 2008 from the overlying salt layer. Polyhalite production districts are therefore closer to the shaft (around 10km) and should reduce transportation times. ICL plans to shrink underground workings to around 25km lowering mining, transportation and geotechnical costs.

Polyhalite tough to mine but easy to process
Polyhalite is a much denser and harder rock than sylvinite and presented significant challenges for the existing equipment which ICL has had to address:

The simpler processing also means that one tonne of polyhalite ore effectively creates one tonne of PolysulphateTM product. In contrast one tonne of MOP requires around three tonnes of sylvinite ore, making it more energy intensive.

This allows the company to limit the number of active mining districts, using fewer pieces of mining equipment and, ultimately, diminishing the workforce by a third.

Final product uses the site’s existing rail spur and is railed around 25 km to ICL’s dedicated berth at Teesside Port. It can accommodate vessels of up to 65,000 dwt. 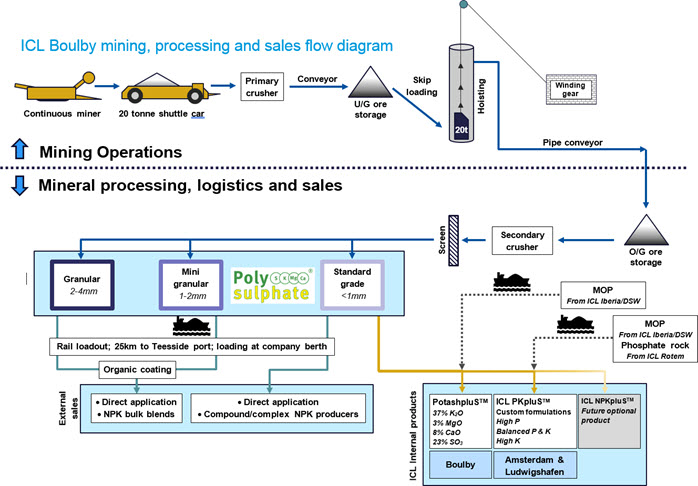 ICL’s plans for polyhalite sales and marketing
Although switching to dedicated polyhalite production undoubtedly lowers site costs per tonne of product, this represents only one half of the challenge facing ICL. The other is to ensure that PolysulphateTM is sufficiently valued by customers to produce positive margins. Creating value in a new product with a primary nutrient content well below (14% K2O) that of most other potash fertilizer products has required a considerable combined research and marketing effort.

CRU previously covered polyhalite’s future market potential in detail in a recent Spotlight and Special Feature as part of our Potassium Sulphates and Potassium Nitrate Market Outlook. In short, the lower primary nutrient content lowers its intrinsic value and makes shipping very costly per unit nutrient (known as a “handling penalty”). However, it is a multi-nutrient fertilizer also containing 6% MgO, 17% CaO and 48% SO3 with lower chloride than MOP. Additionally, it dissolves more slowly than most other potash fertilizers providing an extended release of nutrients.

Although direct sales growth has been strong, ICL believes the best way of leveraging polyhalite’s attributes, whilst maximising its value, is to incorporate it into other products. This is now intrinsic to the future plans of the company and, particularly, to the future of the Boulby site.

ICL already transports standard grade PolysulphateTM to its complex fertilizer facilities in Amsterdam and Ludwigshafen near Frankfurt for use in its ICL PKpluSTM product. This uses MOP and phosphate rock from the company’s other sites with customisable formulations depending on consumer needs.

Following cessation of MOP production at Boulby, rather than mothball all the processing equipment at the mine, ICL plans to continue to use the site’s compactor to create a new granulated product: ICL PotashpluSTM (37% K2O). This will use MOP shipped to Boulby from ICL’s Israeli or Spanish mines mixed and compacted with Boulby’s polyhalite before being shipped from Teesside.

One of the biggest potential markets for polyhalite, however, is as a raw material for compound or complex NPK fertilizers. ICL claims that polyhalite’s attributes enhance the nutrient content and crop yield potential of traditional MOP or SOP-based NPKs with partial replacement of the existing raw materials with polyhalite.

Although 70-80% of current granular sales are used in bulk blends (physical NPK mixtures) by consumers, polyhalite is not currently extensively used for complex and compound NPK production. Such products have significantly longer development periods. As part of ICL’s product diversification strategy, the company is considering starting its own line of ICL NPKpluSTM products using polyhalite. But if third-party NPK producers see value in polyhalite’s attributes in their products, the potential market size could be substantial.

Boulby is ready, but is the market?
In July this year, ICL will bring potassium chloride production in the United Kingdom to an end after 45 years. The Boulby mine will become the world’s only dedicated polyhalite production facility and ICL has invested heavily in marketing this currently little-used fertilizer to attempt to secure the site’s future.

The company plans to reach 1 Mt/y production by 2020, more than treble the 2017 sales volume. Much of the ground work readying the mine for its new function is in place and site costs will be significantly lower. Despite the impressive sales growth already seen, it is the success of ICL’s secondary fertilizer products and the popularity of polyhalite in NPKs – with consumers willing to pay a high enough price – that will determine the long-term viability of the Boulby mine.