New horizons for the phosphate market 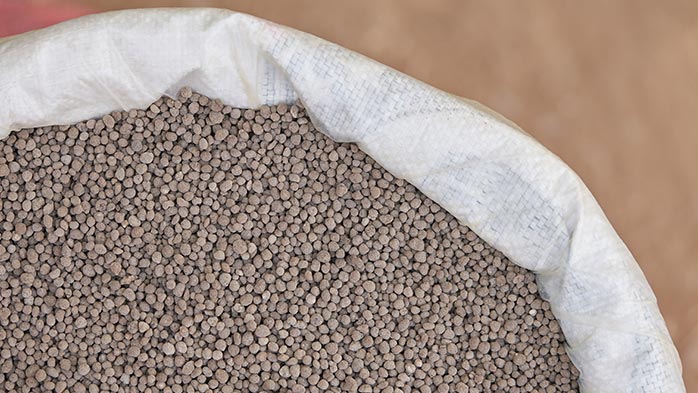 Phosphate fertilizer prices have rallied over recent months, with the DAP FOB Tampa benchmark increasing 22% since September 2017, to USD 410/t. This rally comes despite the recent commissioning and ramping up of low cost capacity in Saudi Arabia and Morocco.


Prices have been underpinned by increases in key raw material values such as sulphur, which doubled in price within the space of four months in H2 2017. Strong global demand, a spread of capacity closures and Chinese supply control have provided further support. Will this new capacity and a return to lower raw material prices drag phosphate fertilizer values lower, or is the market approaching new horizons?

Drivers behind the price rise. A new divergence in the market?
Phosphate fertilizer prices have rallied beyond expectations since September 2017. Sharply higher sulphur and ammonia prices towards the end of 2017 lent support, but the supply and demand balance also tightened. This is despite the Ma’aden Wa’ad Al Shamal Phosphate Company (MWSPC, a joint venture between Ma’aden, Mosaic and SABIC) commissioning its new 3Mtpa phosphate fertilizer facility in August, and OCP continuing to ramp up its new capacity at Jorf Lasfar.

The fourth quarter of each calendar year usually marks a quiet demand period. However, demand through Q4 2017 remained steady and this has continued into January and February, helping to maintain high price levels. Exports from China, the largest exporting country, declined modestly in 2017. This was owed to tight supply following agreed output cuts between producers. Tighter environmental regulations also played a role, with temporary shutdowns commonplace throughout the year. The India market has also been supportive, with a USD 111/t increase in its Q12018 phosphoric price agreement, lifting that key price benchmark to USD 678/t.

In October 2017 Mosaic announced it would be idling its 2Mtpa Plant City facility at the beginning of 2018. This has further tightened supply and maintained strong price levels, despite recent declines in raw material prices.

Phosphate rock prices have firmed modestly in February, but not to the extent of fertilizer and phosphoric acid prices, suggesting this divergence may continue throughout 2018. While this presents a major challenge to phosphate rock exporters, phosphate fertilizer producers - particularly those that do not have an integrated source of phosphate rock - stand to benefit. The key to this continued market divergence lies within China and the behaviour of exporters there. This market divergence will be a key theme and topic of discussion at the upcoming CRU Phosphate Fertilizer Conference in Marrakech.

Developments in China hold the key to the forward market 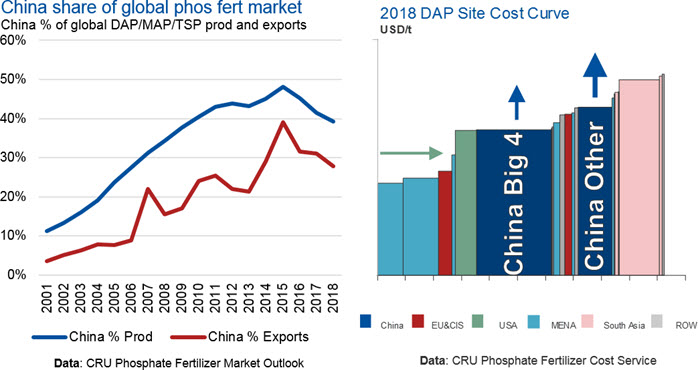 China rapidly built its phosphate fertilizer export market through the 2000’s, and in 2015 was responsible for almost 40% of global DAP/MAP/TSP trade. Although its share has declined in recent years, China remains too important to the global market balance. The position of Chinese producers on the DAP cost curve suggests China provides the market with its marginal tonne. Chinese cost structure will be more important than ever in 2018. Chinese costs are expected to continue escalating as policy makers set tighter environmental regulations to curb emissions across the entire chemicals industry. More information about the cost structure of the phosphate industry can be found in the CRU Phosphate Fertilizer Cost Service. CRU will also be holding a webinar on the cost of producing fertilizer in March.

This escalation of Chinese costs will provide a price floor to the global phosphate fertilizer market. At current prices and cost levels, margins seem reasonable for Chinese phosphate fertilizer producers. However, these margins will be trimmed sharply if prices decline in Q2 2018 as anticipated. CRU will be holding a fertilizer briefing in Beijing on the 11th of April. The seminar will cover the potential impact of environmental regulations on the Chinese fertilizer market and what this means for global prices.

Closures and commissioning; does capacity balance with demand?
Capacity editions are forecast to slow towards the end of the forecast period, with most new large-scale phosphate fertilizer capacity already commissioned or close to commissioning. OCP is set to continue its staggered approach to new capacity, with efficiency gains and de-bottlenecking the focus after it Jorf Lasfar Hub-IV begins production in March. OCP’s next wave of hubs is expected to begin commissioning in 2022. Meanwhile, no new capacity is expected in Saudi Arabia (following the ramp up of MWSPC in 2018) until at least 2024.

Phosphate fertilizer demand is forecast to remain robust outside of China, underpinned by a spread of strong growth in both mature and developing markets. Consumption across the African continent has seen remarkable growth over recent years, while exceptional growth has also been noted in Latin America and the CIS. These regions, alongside South and Southeast Asia, will underpin demand growth going forward.

With strong demand prospects and a slowdown in new capacity, the phosphate fertilizer market balance is expected to become tighter towards 2022. This may be exacerbated by closures of at-risk sites (assets up for sale, high cost or nearing the end of their project life) and even more so if environmental regulations in China cause widespread capacity closure there. This tightening balance represents opportunity for players across the market. 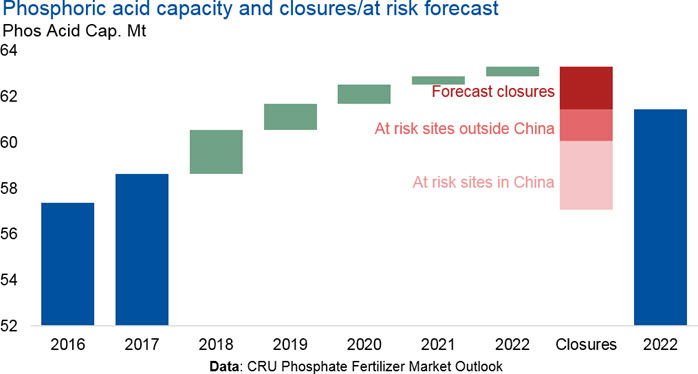 Do new horizons present new opportunities?
The structure of the phosphate fertilizer market continues to evolve, particularly as additional capacity is built in the Middle East and North Africa, where production costs are amongst the lowest in the world. However, with sentiment improving, demand remaining strong and lingering environmental issues in China, investment opportunities are now being considered more seriously. Vinachem recently announced it would be selling its stake in its fertilizer production assets in Vietnam, while PEMEX is looking to divest from the fertilizer industry in Mexico. Furthermore, there has been recent consolidation in the Americas with PotashCorp and Agrium merging to form Nutrien, and Mosaic acquiring Vale’s phosphate fertilizer assets. This has opened the door for relative new comers to the industry like ITAFOS, a company that has recently purchased a string of assets across the region.

Developments in China will be key to how the industry evolves over the medium term. While new capacity will continue to be built elsewhere, potential closures and issues in China could present opportunities in this ever-changing market. Producers will need to be wary of any drastic price increases, with favourable fertilizer affordability levels a major factor behind recent demand growth. Nevertheless, sentiment is seemingly turning more positive in the downstream phosphate market.