US sanctions on ZTE remain uncertain 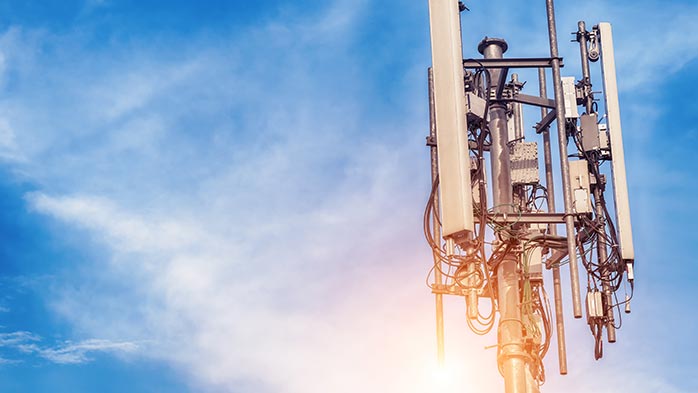 In April, the US government said it would prohibit US component companies from supplying to ZTE, a China-based multi-national telecommunication equipment supplier.

Conflicts date back to 2012
In early June, the US Department of Commerce, which is part of the US government’s Executive Branch under President Trump, made a new deal with ZTE. The US agreed to lift the ban on ZTE’s use of components from US companies. ZTE agreed to pay a $1 billion fine, to put $400 million in escrow in the event of a future violation, and to let US overseers participate in company activities. Under the deal, the components ban is suspended for ten years and can be re-activated should the company commit additional violations during the “probationary period”.

The Department of Commerce agreement, however, did not have strong support throughout the US government. A week after the agreement was announced, the US Senate said it planned to overturn the agreement and restore the ban on ZTE. The Senate has adopted these plans as an amendment to a broader annual defense-policy legislation that will be debated and voted on in coming weeks.

The US government’s skirmishes with ZTE go back more than six years. As early as 2012, the US investigated ZTE’s sales of telecom equipment to Iran. The US banned such sales because the equipment contained critical US technology, mainly chips and other advanced components. In 2014, ZTE said it had stopped such deals, but subsequent investigations proved that ZTE had continued the sales and hidden data about them. In 2017, ZTE pleaded guilty in US federal court to conspiring to violate US sanctions against Iran and North Korea. With this plea, ZTE paid $890 million in fines and agreed to punish top managers for their role in the violations.

This year, in April, US investigators found that ZTE had not fully complied with the 2017 sanctions. It had not punished the senior managers. Consequently, the US Commerce department enacted a seven-year ban on ZTE on 16th April. This ban prevented all US companies from selling components to ZTE Corporation. The status of this ban is yet uncertain – is it off due to the June agreement, or will it be back on after the new legislation?

Why does the ban on ZTE matter?
Why does the US ban have such a devasting impact on ZTE? It is due to the company’s strong reliance on chips imported from the US and China’s scarcity of high-end chips in the fields of wireless and optical communications. This ban has not only hit ZTE, but it also has influences on other manufacturers across the mobile-network supply chain, as shown in the following table. 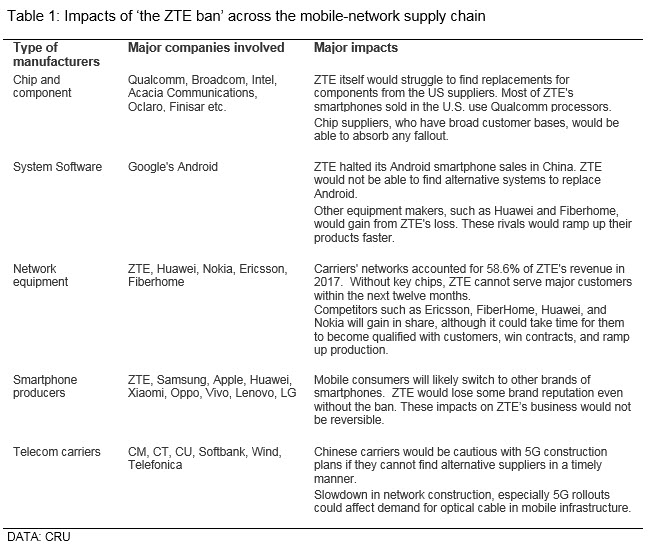 ZTE sources 25% to 30% of the components used in its equipment from US companies. Although China has made substantial efforts to improve chip self-sufficiency, chip makers in China confront extremely high barriers to entry in the fields of high-end chips, particularly those for 5G base stations.

ZTE procures 65% of its chips for smartphones from Qualcomm Inc. Recently, Qualcomm has launched a chipset that supports 5G mobile transmission equipment and smartphones. Without those ingredients, ZTE and most other phone markers will struggle to offer viable 5G appliances. The Chinese firm would be squeezed out of the smartphone business if the ban is enforced, let alone its plan to launch a 5G-enabled smartphone.

ZTE sources Remote Radio Unit (RRU) and Radio Frequency chips for its wireless base station from US vendors including Analog Devices Inc and Xilinx Inc. ZTE also relies on optical components/modules from Maynard, Acacia, Oclaro, and Lumentum, as well as software from US suppliers such as Microsoft and Oracle. Micron Technology is the primary supplier of NAND Flash and DRAM.

ZTE’s role in the mobile phone and equipment market is essential to many of these American chip companies, who count on ZTE to generate higher revenue. Thus, uncertainties over the ban may also affect many US chip companies as well as ZTE.

As one of the world’s leading listed manufacturers of communications equipment, ZTE has significantly enhanced its global market position over the last few years, affecting revenue growth for rivals such as Ericsson and Nokia. The company also provides system-integration and network-construction services. International business accounted for 43% of ZTE ‘s 2017 revenues.

ZTE’s collapse would provide opportunities for its international rivals to regain some market share. Even if the US lifts the ban, some damages are not reversible. ZTE will be struggling to rebuild its brand reputation and secure large customers over the next twelve months. ZTE halted its business operations in May. Some market participants believe it would take at least a month for ZTE to resume its central operations.

It will be very difficult for ZTE to keep its position as the fourth biggest smartphone vendor in the US market.

In early 2018, ZTE announced plans to launch a 5G-enabled smartphone in late 2018 or early 2019. This plan tied closely with the US chipmaker, Qualcomm. Qualcomm also signed a memorandum of understanding with Xiaomi, Lenovo, Oppo, and Vivo for supplying $2 billion of Qualcomm components over three years. Currently, ZTE’s strength in smart phones is at the low-end of the market. Without the 5G-enabled smartphone, ZTE may lose an important opportunity to move to the high-end of the market.

ZTE is an important participant in the development of 5G
Another concern was that the parts ban could impede China’s 5G progress. China aims to be the first country to have 5G deployed commercially on a broad scale. According to a new report from the research firm Analysys Mason, China holds a narrow lead in overall 5G readiness ahead of South Korea and the US. ZTE and Huawei, two crucial network equipment suppliers, have been leading the development and commercialisation of 5G-related technologies in China.

Over the last few years, ZTE has participated in the discussions for formulating 5G standards and made substantial investments in 5G R&D. ZTE has submitted more than 4,000 international proposals concerning the 3rd Generation Partnership Projects(3GPP) 5G New Radio (NR) standards. In early 2018, ZTE said it planned to raise RMB13 billion (US$2.1 billion) via a private placement to support 5G mobile network technology development.

ZTE’s key technology, Massive MIMO, has been commercially deployed in China, Japan, Spain, Austria, Singapore, Korea, Indonesia, and many other countries. This technology which has gained industry-wide attention and recognition will be a key enabler and foundational component of 5G.

In February 2017, ZTE released a full range of 5G mmWave and sub-6GHz pre-commercial base stations. ZTE was the first to release the 5G Flexhaul solution, a new end-to-end network solution for 5G transport. This marks a milestone toward 5G commercialisation, as the 5G Flexhaul system can reduce the total cost of ownership by 30% compared with traditional solutions. ZTE has also released the world’s first end-to-end 5G network-slicing solution.

In the meantime, ZTE also partnered with over 20 mobile operators globally to carry out 5G field trials. ZTE’s potential collapse could create obstacles for these operators’ 5G developments. Examples of ZTE’s overseas activities in the field of 5G are listed below.

Equipment for 5G networks is a key opportunity for China to emerge as a leader in telecommunications development. US and European companies have dominated mobile systems innovation over the past few decades. China’s manufacturers and carriers already had a big role in standards committees. China aims to invest RMB 2.8 trillion ($440 billion) on 5G mobile technology over the 10-year span from 2020 to 2030. It will be the country’s most expensive buildout of telecommunications infrastructure.

From 5G end-to-end product development to 5G pre-commercialisation, ZTE has played a significant role. ZTE’s survival will not just save jobs for 75,000 people. The firm’s success is indeed important in national technology goals. With FTTx infrastructure approaching the end of a nationwide-buildout program, many Chinese companies, including optical fibre and cable manufacturers have focused on 5G mobile network construction to drive new growth opportunities. An aggressive 5G roll-out would benefit these companies.

Explore this topic with CRU
Want to read more? Register to continue reading and gain access to all CRU Insights
Wire and Cable
Top