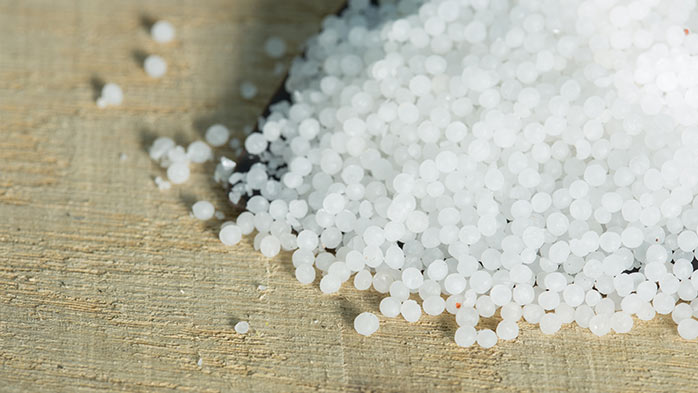 After the surge in Chinese potassium sulphate (SOP) exports in Q2 – led by Iranian demand – exports in the third quarter of 2019 slowed. Nevertheless, traders were able to maintain remarkably consistent SOP exports through Q3, averaging around 25,000 tonnes a month.


CRU understands that increasingly aggressive pricing offers made by traders have facilitated the strong export volumes, with some reports indicating prices as low as US$ 370/t FOB. This behaviour shines a light on the background of weak domestic fertilizer demand in China in 2019. Domestic SOP prices have fallen throughout the year as increasing nutrient use efficiency across the country finally impacts potash demand, forcing traders to seek ever smaller arbitrage opportunities overseas.

Chinese exporters delivering more into established markets
During Q2 2019 Iran provided a surprise outlet for more than 100 kt of Chinese SOP, despite the country remaining under US-led sanctions since late 2018. This volume essentially represents Iran’s entire annual SOP import requirement and Chinese traders have delivered no further cargoes of SOP to the Middle Eastern nation since June.

Despite this, China has continued to export SOP at a consistent rate of around 25,000 tonnes a month throughout Q3. This means that in the first nine months of 2019, according to China Customs data, SOP exports reached 279,000 tonnes, more than double the previous highest annual total in 2016. 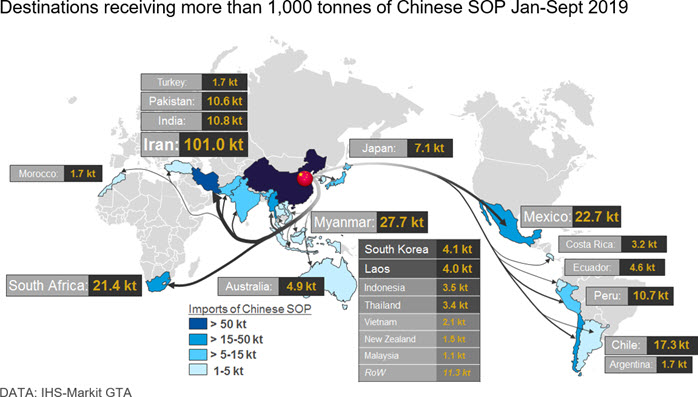 Outside Iran, Chinese SOP export destinations are geographically widespread and fragmented with only four other countries – Chile, Mexico, Myanmar and South Africa – receiving more than 15,000 tonnes each by the end of September. Some of the larger import markets of Chinese SOP slowed during Q3, but traders have proven to be highly reactive, diverting volumes to smaller markets to maintain output levels. 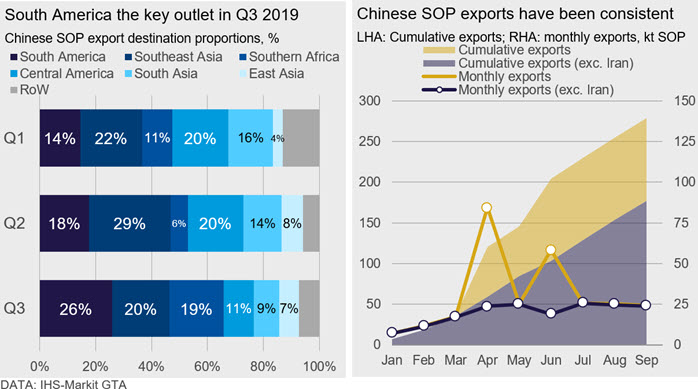 For example, exports to Myanmar and Mexico – both of which have now received more than 20,000 tonnes of Chinese SOP in 2019 – slowed by more than 30% in Q3 compared to Q2. Conversely, shipments to southern hemisphere markets such as Chile and South Africa surged during Q3 to make up for reduced northern hemisphere demand. According to reports CRU received during Q3 from market participants, this may have related to increasingly aggressive price offers.

Aggressive SOP pricing points to weak domestic Chinese market
Throughout 2019, CRU has repeatedly reported on low SOP pricing offers made by Chinese traders to establish and grow export market share. These efforts appeared to intensify during Q3 with Fertilizer Week receiving reports of Chinese standard grade SOP offered as low as US$ 380/t or even US$ 370/t FOB in a single instance.

Traders have been able to offer product at such low prices due to a combination of stagnant Chinese ex-works prices (around RMB 2,700/t since June) and the depreciation of the RMB against the US dollar following intensifying acrimony in the US-China trade war during Q3.

A further consideration is that throughout the second half of 2019, bulk ocean freight rates have increased sharply as the shipping industry gears up for the introduction of the IMO 2020 regulations at the start of next year.

The fact that Chinese SOP traders have been willing to absorb the increased freight rates and drop FOB price offers to barely above domestic prices underlines the aggressive nature with which they have approached the SOP export market in 2019.

It has also resulted in a widening arbitrage with northwest European SOP prices. So far though, very little Chinese SOP has arrived in European markets. This is in part due to the higher ocean freight costs which have wiped out the gains made by the weaker RMB. But CRU understands it is also because Chinese SOP is not (currently) widely certified for use in Europe.

Additionally, it also highlights the current weakness of domestic demand in China, not just for SOP or potash in general, but across the wider fertilizer market.

One of the key indicators of the state of China’s domestic fertilizer market is domestic NPK prices. CRU understands that the overwhelming majority of standard-grade SOP produced in the country is used in a complex or compound NPK. Chloride-free NPK prices have declined by 11% since Q1 2019, with domestic producers of NPKs reportedly operating at very low utilisation across China. 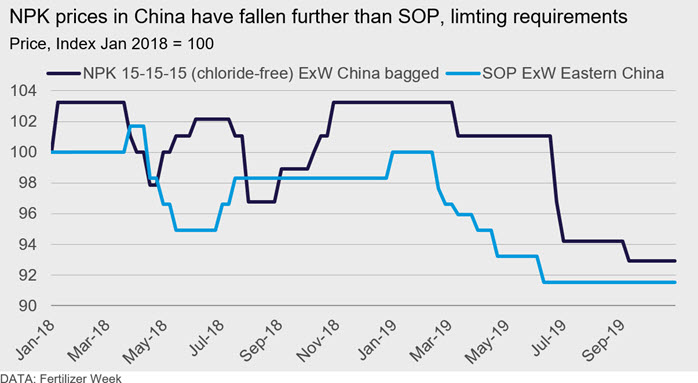 The country is continuing to increase nutrient use efficiency, limiting NPK demand, which filters through to potash requirements. Consequently, domestic outlets for SOP have been more limited in 2019, and traders have had to intensively pursue export opportunities.

Much of this will depend on domestic Chinese SOP prices and whether traders are able to achieve certification of Chinese product in European markets in the near term. Should Chinese SOP begin to arrive in bulk cargoes into European markets then we would expect export volumes in 2020 to reach similar levels. This would certainly lead to a contraction in the price differential between East Asia and Europe meaning the arbitrage opportunity would likely be short-lived.

Nevertheless, with Chinese fertilizer demand expected to remain weak into 2020, traders are likely to continue to seek export opportunities for SOP. The market has remained remarkably robust this year with only minor price declines in Europe. For example, European SOP prices have fallen by only 1% since the start of 2019, whereas European granular MOP prices have declined by 8% over the same period.

We believe that Chinese SOP will soon begin to enter the European market – in bulk or large containerised volumes – at some point in H1 2020 despite the high ocean freight costs. This would likely result in significant, albeit temporary, disruption to current trade flows and price differentials and could mark the beginning of greater alignment between – currently disparate – global SOP prices.