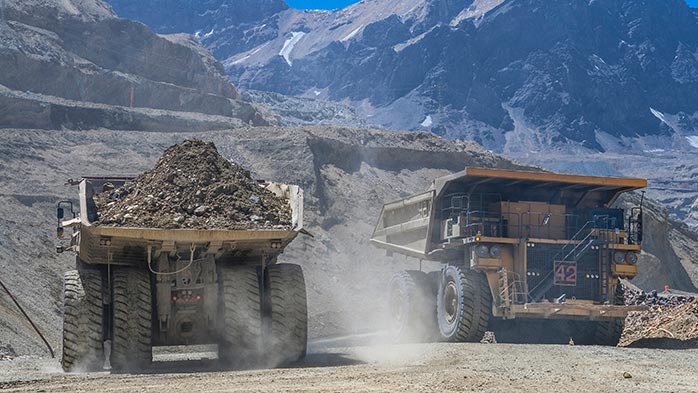 In recent years our long term view of the copper market has foreseen falling production at existing mines coupled with a demand boost from electric vehicles resulting in multi-million tonne per year shortfalls in supply and commensurately higher prices by the end of the next decade.

The forthcoming Copper Long Term Market Outlook which is to be published at the beginning of March 2019, considers whether this narrative still holds true.


Copper price paradox
We continue to hold a positive long term outlook on copper, predicated on a significant supply gap eventually opening up in the 2020s. However, today’s low $6,000s /t copper price contrasts with project economics that require a much higher price in order to incentivise new mine capacity. For the major mining companies in particular this presents a conundrum: invest now in an attempt to maximise future cash flows while risking the ire of short-term focused shareholders or wait until the copper price recovers but then potentially miss out on the most lucrative years of the next upturn.

Moving from surplus to deficit
Over the last year we have fully incorporated a number of high profile copper projects into our mine supply projections, including Quebrada Blanca Sulphides and Quellaveco. Board approval for these multi-billion dollar investments was undoubtedly helped by the period of near or at $7,000 /t copper prices during the second half of 2017 and first half of 2018. More broadly, renewed C-Suite confidence has helped firm up the project pipeline to the extent that we now expect almost 1 Mt/y more mine supply by the early 2020s than at this time last year. Looming market deficits have given way to modest surpluses and prices are expected to remain below $3.00 /lb ($6,614 /t) in real terms over the next five years.

The shift in the medium term view raises the question as to whether the long term outlook for copper has also changed. Previously, falling production at existing mines coupled with a potential boost to demand from electric vehicles meant that multi-million tonne per year shortfalls in supply and commensurately higher prices were expected by the end of the 2020s. The forthcoming Copper Long Term Market Outlook which is to be published at the beginning of March 2019, considers whether this narrative still holds true.

Project pipeline has grown significantly
Despite the stronger outlook for copper mine supply over the medium term, output from today’s operating mines is still expected to peak at around 22 Mt in 2021, reflecting a combination of declining ore grades and reserves exhaustion. Even accounting for approved projects only adds another three years before growth rates turn negative. Some are now expressing concern that the lower copper price during the second half of 2018 and start of this year already means that there will be a dearth of investment in projects starting up in 2024 or 2025. However, looking slightly further ahead there is still a significant pipeline of projects that could begin to fill any gap in supply. These are rated by CRU as either ‘probable’ (feasibility study and environmental permitting underway) or ‘possible’ (pre-feasibility study underway / reasonable economics). Indeed, as the chart above demonstrates the decade ahead project pipeline represents almost 12 Mt/y of contained copper, which is 20% more than we were forecasting a year ago. It is more reminiscent of the outlook at the beginning of 2014 and 2015 than 2016 or 2017, when mining companies purged future investments in response to the sharp decline in the copper price and operating margins. The 400,000 t/y of expansion plans for Collahuasi, which were presented by Anglo American in early 2018, is just one example of projects that have been added to our list over the last year.

Rationalising the electric vehicle story
Looking back to 2017 in particular, there is no doubt that some industry participants, although not us, saw potential growth in electric vehicles (EVs) as justification for an immediately higher copper price. Today the market consensus appears more accepting that EVs are not meaningfully going to affect global copper demand until the mid-2020s, when global consumption should reach 1 Mt/y. Nonetheless, the story remains compelling. Full battery electric vehicles (BEVs) consume four times as much copper as an internal combustion engine (ICE) vehicle and the associated infrastructure requirements (chargers and grid storage and infrastructure) are also copper intensive. Moreover, once an inflexion point in EV sales is reached, subsequent growth rates are likely to be spectacular, taking related copper demand to 2.8 Mt in 2030 and over 5 Mt in 2035 in our projections. For China in particular, where upwards of 50% of growth in EV-related copper demand is expected to occur over the next fifteen to twenty years, the sector is critical to the demand outlook. Indeed, without it we estimate that Chinese refined copper consumption would fall by around 25%, as investment in the electricity grid, real estate and other infrastructure begins to normalise. 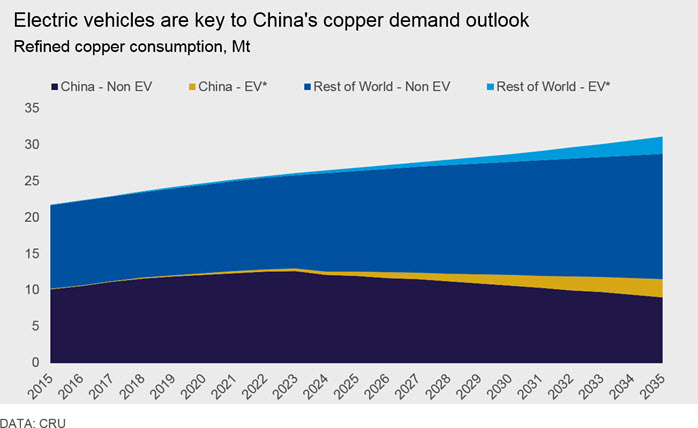 Scrap uncertainties addressed
Last year China introduced restrictions on the import of low grade copper scrap (Category 7) as well as placing a 25% tariff on secondary material from the USA. However, the resulting disruption to the market was less than expected as material was processed elsewhere e.g. Malaysia and then redirected into China. Nonetheless a further tightening of import restrictions this year and the prospect of a full ban starting in 2021, countered by the possibility that higher grade scrap (Category 6) maybe re-designated as a secondary resource, is creating uncertainty.
Unpredictable government policy aside, the longer term debate about scrap concerns the extent to which an apparently large and growing pool in China will be returned to the market either in the smelting and refining process or used directly by semi-fabricators. The existing domestic scrap collection infrastructure is rudimentary with relatively undeveloped supply chains and little in the way of automation: the top three scrap recycling companies in China account for less than 20% of the total market. This situation could of course change quickly and our modelling suggests that by 2035 scrap will meet around one third of China’s total copper demand. Even then the scrap pool is expected to continue growing, so a more aggressive high-scrap scenario is justified.

Stacking up project costs
Project economics are the other consideration and here we utilise CRU’s in-house Copper Mining Cost Model. Dollar input costs and by-product prices, along with the influence of individual country exchange rates are key to determining expected operating costs. However, cash costs net of by product credits only tell part of the story. For the marginal project required to meet future demand in 2030, for example, this measure is well below even today’s copper price and that is before sustaining capital, working capital and any central overheads allocation is factored in. However, it is the development capital costs that really make a difference, as they account on average for around 40% of the full economic costs of production. Moreover, capital costs measured on a unit per tonne of copper basis have remained stubbornly high. There is less upward pressure on actual plant and equipment costs than during the previous cycle but harder-to-measure project costs such as environmental permitting, health and safety and the social licence to operate continue to escalate.