Although some existing lines are operating below their stated power rating, we believe the growth of inter-regional electricity markets will result in a larger displacement of coastal thermal power with power generated inland and this will reduce coastal thermal coal demand in the medium-term. 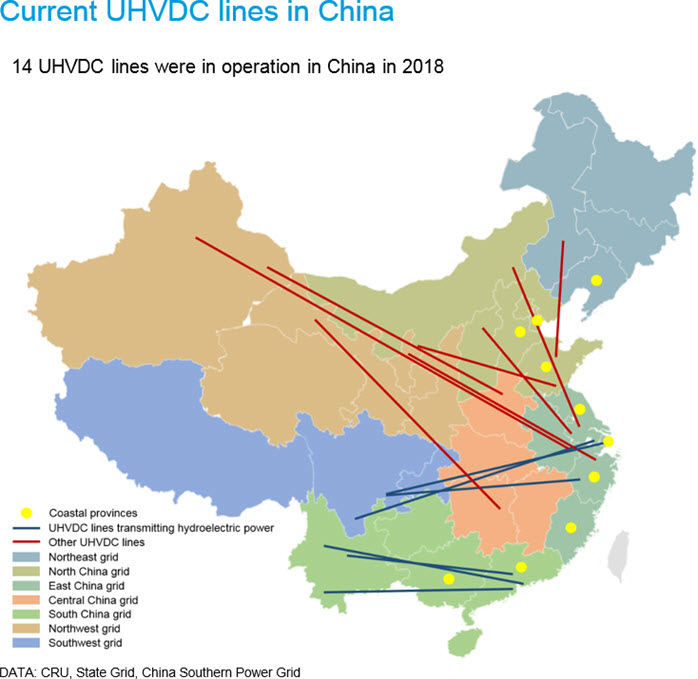 Compared with alternative current lines and direct current lines with lower voltages, UHVDC lines are more efficient and economical for long distance power transmission. China currently has 14 UHVDC lines in operation, transmitting power inter-regionally or inter-provincially from Northwest and Southwest to central and East China. If existing lines delivered electricity at their design rate, ~580 TWh/y would be transmitted to the Chinese coastal area, where ~28% of Chinese coal-fired power is produced. In practice, however, we estimate that the 14 UHVDC lines are transmitting only ~340 TWh/y currently, suggesting an average utilisation rate below 60%. The under-use of these lines is due to the complexity of matching fluctuating power generated with volatile demand when there is a lack of affordable energy storage equipment.

As illustrated in the table, not all UHVDC lines are running at an undesirable level. In fact, lines transmitting hydro-electric power from Sichuan and Yunnan to Jiangsu, Shanghai, Zhejiang and Guangdong are running at almost full capacity, outperforming most of other lines.

Power supply flexibility and inter-provincial import demand are essential
There are two main factors affecting the actual usage of long distance UHVDC lines and these can help to understand the impact of new capacity being built. The first is the type of electricity transmitted. Compared with wind and solar, hydro-power is more favourable for the receiving provinces because of its flexibility and reliability. That is, under most circumstances, power output can be reasonably managed by altering water flows through the generating equipment.

By contrast, wind and solar power generation is often mis-aligned with the power import requirement in the receiving provinces. Thus, to optimise the transmission capability of lines sending renewable power from the Northwest to the Southeast, there needs to be coal generating capacity in exporting provinces of sufficient flexibility. However, the vast majority of new coal-fired power plants in China have been postponed or cancelled in order to meet the country’s target for coal power capacity control.

For example, although Jiangsu is a province with considerable power demand and needs to import power, the UHVDC line from Inner Mongolia fails to achieve its target for power transmission, running below the power rating throughout the year due to the variability of renewables and the postponed coal-fired power plants.

The second factor limiting power transmission of some UHVDC lines are barriers associated with inter-provincial electricity transactions. This is specially true for those provinces that have less urgent needs for power imports and that are also under some pressure to reduce the curtailment of hydro, wind and solar generation. For example, while Gansu, a Western province, attempts maximise sales of wind power through the UHVDC line to Hunan, the receiving province itself has its own target to improve its hydro utilisation rate. This inevitably restricts the actual power this line can transmit.

New projects can further displace coastal thermal power demand
Six or seven new UHVDC lines are expected to be constructed in China and put into operation in the next three years. The plans for these lines have been agreed after heated discussions that have lasted for several years, as stakeholders and energy policy experts have grappled with the difficulty of improving the utilisation of some of the existing, long-distance power transmission lines. As such, the lines that have recently received permits will need to demonstrate that utilisation will improve. 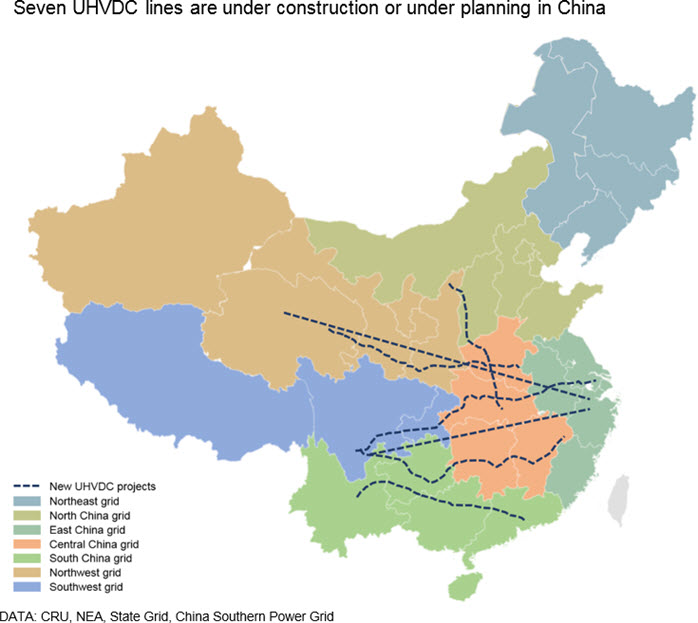 Four of the new lines are designed to send power from current or new hydro-electric plants in Sichuan and Yunnan in the Southwest. The lines are expected to have a high effective capacity, similar to current lines, because clean, low-cost and flexible hydro power is more attractive for Eastern provinces. Another two lines will transmit coal and renewable power to provinces in central China, such as Hubei and Henan. These provinces have a tight power supply due to increasing fuel prices following the shutdown of coal mines in these areas as part of the coal supply-side reform programme. The last line, currently in the planning stage, is also targeted to match renewables power supply with increasing power import demand in Eastern China. Although the Northwest provinces still have to deal with the stability and flexibility issue to sell more renewables to Eastern China, the other three lines will still be able to displace some coastal thermal coal demand, especially given Eastern provinces are exhibiting energy intensity constraints.

Clearly there are many factors to consider in order to estimate the impact of these lines of thermal coal demand. As shown in the table, we estimate that power transmission will increase by 174 TWh/y by 2022 and, based on our understanding of the power mix in the coastal provinces, ~65% of this could directly displace coastal thermal power generation. This can be translated to ~45 Mt thermal coal demand, which represents ~5% of total thermal coal demand in coastal provinces and 20% of current thermal coal imports into China. This suggests that, by 2022, a considerable amount of coastal thermal power demand could be at risk, either shifting to internal coal generation or hydro, wind and solar. This transfer will accelerate when a better inter-provincial electricity market is established in the future.