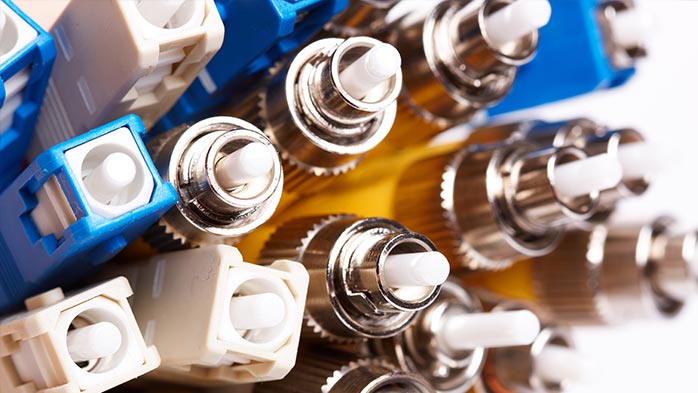 The amount of optical cable installed per year globally has increased with a compound annual growth rate of 14% for 20 years, from 1997 to 2017. In 1997, the total installed was 37 million fibre-km. In 2017, installations reached 492 million fibre-km.


Whilst the total installed last year exceeded 500 million fibre-km. This represents a substantial growth in annual demand especially in the last ten years. For example, it took the world’s network operators around thirty years – from the late 1970s until 2008 – to reach a cumulative total of one billion fibre-km installed. Now, the world’s cable customers are installing that amount every two years.

In recent years, China has accounted for more than half the world’s total annual demand for optical cable. China’s telecom network operators have installed fibre in the full range of telecom applications – inter-city, intra-city, FTTx, and mobile cellular systems. And as in other countries, China also has companies and government authorities installing fibre systems to support the electric power grid, railways, highways, pipelines, airports, WiFi hotspots, data centres, and many other applications.

However, whilst total optical cable consumption surpassed the half-billion level in 2018, global growth slowed to just 4%, the lowest level since 2003. The predominant reason for lower global growth rates can be attributed to China, where there was a notable pullback in domestic demand towards the end of 2018. Indeed, CRU estimates Chinese demand contracted by 1% last year, whilst the volume of cable installed in all markets other than China grew by 10% from 2017 to 2018 in comparison. 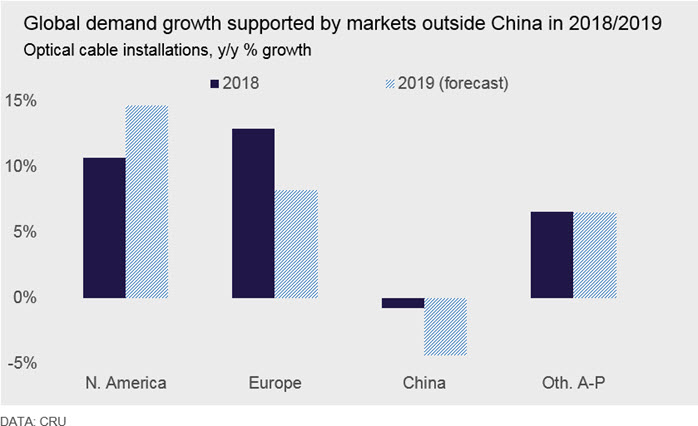 Chinese market in transition
China’s market will fall again in 2019, whilst the non-China markets will post a near double-digit increase, meaning the world’s total optical cable installations will rise just 2% in terms of cabled fibre-km. China’s market has entered a transition period – the three main telecom operators have completed the bulk of their work on 4G and FTTH networks, and China’s 5G construction currently is limited to selected metro markets with large field trials.

The transition period in China is not unusual. With the exception of a few carriers in Japan, South Korea, the US, and a few other countries, full-scale 5G construction is not expected until 2020 or later. What’s different about China is that the country’s carriers completed vast 4G and FTTH projects in a relatively small number of years, causing unusually high levels of fibre demand during those years. With China’s FTTH networks now having passed over 90% of homes, and with more than 80% subscribing it has become increasingly clear that China’s FTTx and 4G markets have become saturated with fibre and that demand from both sectors will be softer this year.

New supply-demand balance is affecting prices and trade
The weaker-than-expected orders from China’s carriers brought the global fibre shortage to an abrupt end in 2018. The shortage began in early 2016 and lasted more than two years. During that time, several major fibre manufacturers had new factories under construction or major expansion projects underway. Some of this new capacity came on line in 2017, and more was slated to start up in 2018, just as market growth was slowing down. During the shortage, fibre prices had shifted up by about 40% over the two-year span with the steepest increases occurring in 2017. In H1 2018, the escalation of prices was progressing at a slower rate. By November 2018, there were reports that the trend had reversed, and prices were moving downward. Since the start of 2019, there have been reports that prices have fallen more precipitously. In early March, CRU assessed bare fibre prices had fallen further, back to pre-shortage levels – similar to, or lower than prices reported in 2015. 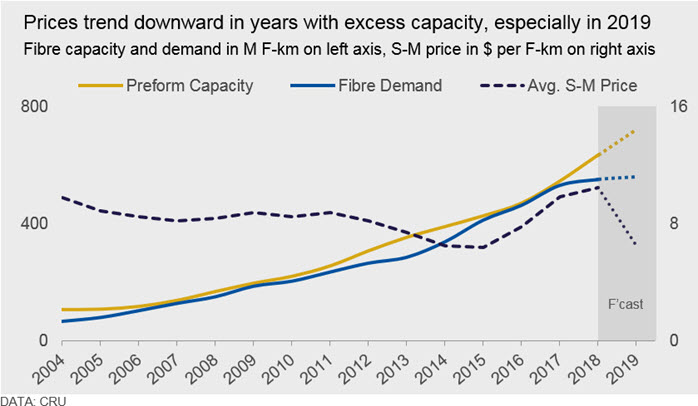 The fibre shortage was largely due to inadequate preform capacity. Many large fibre and preform makers have been adding capacity regularly since the recession of 2008 and 2009. However, fibre demand increased more rapidly than capacity could be commissioned. This situation shifted in mid-2018, when the preform capacity expansions were able to achieve a reasonable excess of capacity to help deal with unexpected demand surges and peak months. However, it has now become apparent that following a pullback in Chinese demand, this sufficient capacity buffer has shifted rapidly towards excess. CRU now expect excess preform capacity will continue to weigh on prices near-term.

Prospects beyond 2019
CRU does not believe the downturn in Chinese demand will last long, indeed we expect a resurgence post-2019 as China’s carriers ramp up 5G construction. The amount of fibre in those projects may offset the flatness in other application segments and drive a turnaround in the growth trend, especially considering China has the potential for a high ratio of fibre-km per 5G base station. With 4G, all three of China’s carriers built their own base stations and cable networks. In some other countries, the market has tower companies, and in the future, the potential for more infrastructure specialists. This may affect the amount of fibre used or the timing of network construction.

In any case, 5G will be a key variable in fibre demand for many advanced telecom markets, including China over the coming years. The reason is that 5G construction will need fibre to link a much denser array of cell sites than in 4G networks. Plus, 5G networks will support communications between many devices other than smart phones, tablets, and computers. Examples include automobiles, trucks, cargo containers, point-of-sale terminals, vending machines, smart-grid equipment, smart-cities and smart building equipment, and many other types of devices. These systems will rely on connections to new data centres, which also will drive demand for fibre.

Despite the recent softness, CRU forecasts China will account for approximately 50% of the growth in total global optical cable demand between 2018 and 2023 and will remain a key driver of demand mid-term.

The topics explored above, including - the use of fibre in 5G networks, in data centres, in expanded networks, and in global markets – are top priorities in CRU’s research to analyse, assess, and forecast optical cable markets. They also are key topics in this year’s FTTH APAC Conference – the 14th version of this annual event. CRU will continue to cover these topics in future reports and future events.