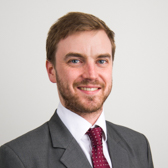 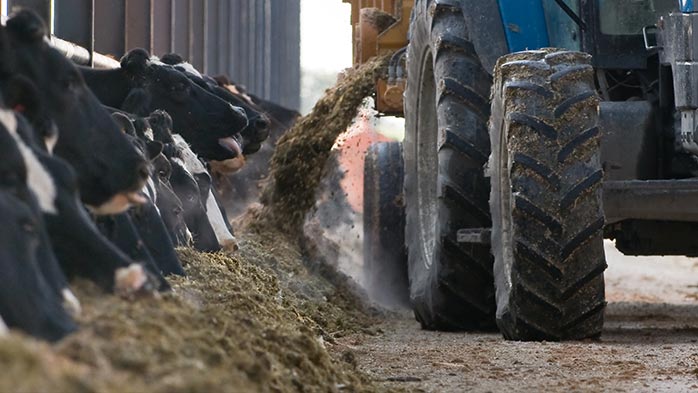 
An outbreak of African swine fever in China this year caused a substantial cull of the world’s largest pig herd, weighing on IFP demand. This has pushed more Chinese product into the export market and accelerated the displacement of exports from elsewhere into Asia, the most promising region for IFP growth over the medium term. Low cost producers in North Africa and Russia are tightening their grip on important demand regions in Europe and the Americas, resulting in a number of capacity closures and industry consolidation. However, there is some faint hope for under-utilised IFP production facilities. The rate at which substitute products weigh on demand growth is slowing, which should allow strong growth in livestock production to support IFP demand. In this insight we assess how IFP producers are holding up against current soft demand and whether the anticipated return to growth in IFP demand will help to lift the industry out of its precarious state. 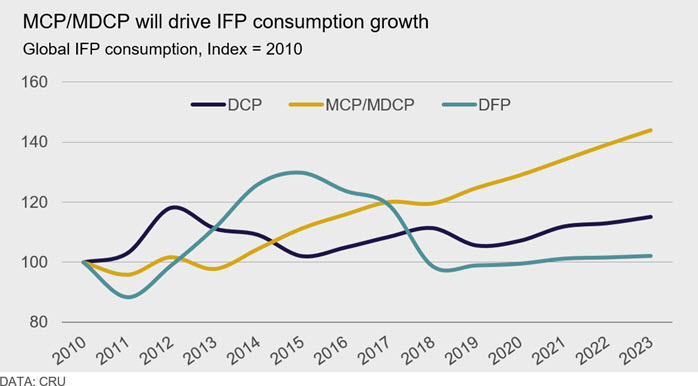 How has the African swine fever influenced IFP demand?
This year the African swine fever (ASF) epidemic in China has led to a vast pig culling programme in order to halt the spread of the fatal disease. Reports indicate that 30-55% of China’s swine herd has been eliminated already. In China the IFP of choice for the swine producers is dicalcium phosphate (DCP), so the cull has hit Chinese DCP demand. Though the cull sounds extreme, there are some important caveats which must be understood in order to evaluate the likely impact it will have on IFP demand.

Chinese swine production is predominately a backyard farming industry, which is inherently more at-risk of ASF because these animals are exposed to less stringent animal health and welfare standards. In China, the disease has spread through wild hog populations and cross-contamination from infected farms. Commercial scale operations are indoors and contained, so less likely to be contaminated. Backyard farms consume less IFP and compound feed than commercial scale producers, using cheaper feedstuffs and nominal additives such as IFP.

Though China’s swine herd size has diminished considerably, it will need to be rebuilt at some point, as China maintains its insatiable appetite for pork. Government policy was already forcing the closure of smaller scale ’backyard farms’, meaning once the herd rebuilds it is most likely to do so in industrial-scale facilities, many of which consume additives such as IFP’s. Given the sharp increase in domestic pork prices, these operations will be incentivised to rapidly rebuild the herd. We expect the herd size to exceed 2018 levels by 2022, with a larger proportion of pig production coming from commercial farms with higher IFP consumption rates. This projection is be dependent on the control and containment of the ASF, which is currently very uncertain. 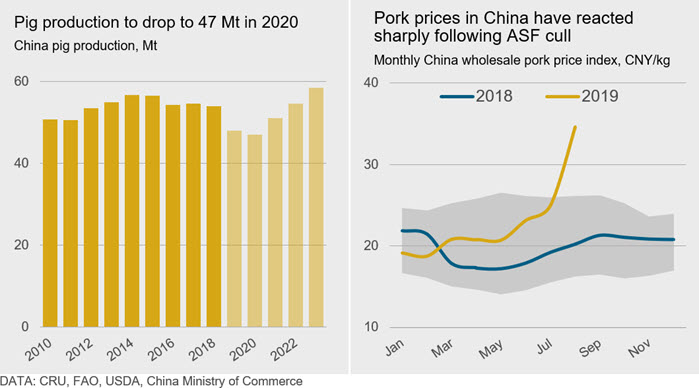 Forecasting the outcome of such a volatile event is especially challenging. To account for this uncertainty, we modelled several alternative scenarios which are discussed at length in the September 2019 edition of the CRU Animal Feed Phosphates Market Outlook.

Whatever the case, there are several developments in the IFP market that are occurring as a result of China’s ASF epidemic. Chinese IFP producers have become more aggressive in the export market during this period of domestic demand shock, therefore pressuring global prices even lower. On the contrary, the decline in swine production has resulted in sharply higher poultry production in China, subsequently boosting monocalcium phosphate (MCP) and mono-dicalcium phosphate (MDCP) demand. This switch to more MCP and MDCP consumption is reflective of broader global trends, with livestock producers generally looking for more efficient products. 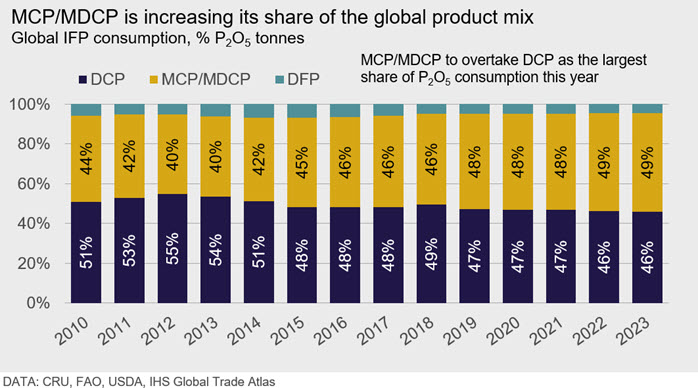 Tougher competition led to market consolidation
Several major acquisitions occurred since the previous Outlook was published in 2016. Most significant was Mosaic’s acquisition of Vale’s phosphate fertilizer business unit. This included 755,000 t of DCP production capacity in Brazil. This pushed Mosaic up from the fourth largest to first largest IFP operator by installed production capacity. Now Mosaic supplies Brazilian DCP consumers domestically, meaning a sharp drop in DCP exports from the US to Brazil. Mosaic’s Brazil operations are integrated with phosphate rock production, allowing it to cut costs as it optimised its supply chain by reducing freight costs. This ensures Mosaic remains competitive in Brazil against the rising tide of imports from producers such as OCP and Quimpac, both of which are increasingly vying for market share in the country. 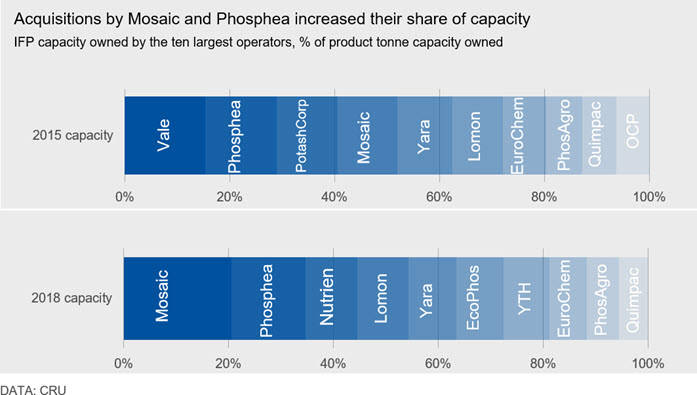 Phosphea increased its capacity by acquiring Elixir’s Prahovo plant in Serbia, which produces DCP and MCP. OCP was pushed out of the top ten as EcoPhos commissioned its Dunkerque DCP plant in France and YTH entered the ranks following an upgrade to its MCP production at Jinning. The merger of Agrium and PotashCorp formed Nutrien, which remains the third largest operator by capacity despite closing its defluorinated phosphate (DFP) line at Aurora.

Recently, the DFP line at Aurora is the main casualty of the export strategies of low-cost producers. Of the lower cost producers, OCP has scope to increase its exports into Brazil and Europe, and PhosAgro announced at its September 2019 Capital Markets day that it plans to expand IFP production capacity by 2025. These low-cost producers could put further pressure on non-integrated producers in Europe and will also look to secure larger shares of growing markets in the Americas.

What does this mean for the IFP industry?
We forecast a dip in demand in 2019 following the cull of China’s swine herd, but we hold the optimistic view that China will quickly rebuild its herd, limiting downside to demand. We also believe that the substitution of IFP with alternatives such as phytase and dried distiller grains has reached a peak in most developed markets, limiting the risk of further demand destruction. Livestock production is expected to increase globally, especially for poultry, aquaculture and swine. Poultry and aquaculture are typically considered MCP/MDCP markets, and as these two sectors are growing most rapidly, MCP/MDCP will increasingly take a larger share of demand. 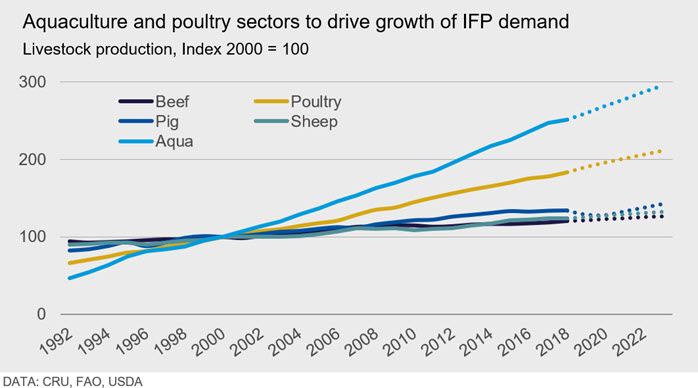 The sustained low utilisation rates and supressed prices has put many IPF capacity projects on hold, but the ample excess capacity in the market remains a significant risk. Ultimately, a recovery in demand is expected to lift the IFP industry out of its current depressed state, but there are many risks that need to be considered in this dynamic but opaque market.