On August 4, 2020, a major port explosion caused devastating damage across the city of Beirut, Lebanon. In the initial aftermath, the disaster is reported to have caused at least 100 deaths and injured around 4,000 people.


It has since been established that the explosion was caused by the ignition of 2,750 tonnes of ammonium nitrate (AN) stored at the port. This tragic event has rocked Lebanon’s largest city and has naturally raised questions over AN storage and handling regulations. This Insight provides context on the well-established safety considerations in the AN industry and considers the implications of another high-profile AN-related incident on the market.

Unsafe storage conditions cited as cause of explosion
The explosion occurred on August 4, at a warehouse in Beirut’s major port. The Lebanese President Michel Aoun has confirmed the blast was caused by 2,750 t of AN that had been stored unsafely in a warehouse at the site. The blast has destroyed the country's largest port, including silos containing the national grain reserve. Lebanon imports as much as 80% of its food needs and around 85% of the country's cereals are understood to have been stored in the facility.

The AN is understood to have been impounded at the port since late 2013 when a vessel travelling from Georgia to the port of Beira in Mozambique encountered engine problems and was forced to port. Media reports suggested the ship was deemed unseaworthy by Beirut’s Port State Control and it was forbidden to complete its journey. The ship owner is understood to have declared bankruptcy, leaving the ship and its cargo abandoned at the port.

The Director General of Lebanese Customs told reporters that customs officials had sent six documents to the judiciary warning that the AN stored at the port posed a danger. Lebanon’s Prime Minister also commented that it was unacceptable that the AN had been left for six years at the warehouse without appropriate safety measures.

While the origin and destination of the cargo’s original route are largely immaterial now, the Shipping Agency of the Georgian Ministry of Economy has confirmed that the vessel contained AN produced by Rustavi Azot, the Georgian nitrogen producer. The vessel was destined for Mozambique, which typically imports 35-40 kt per year for explosives use in open pit coal mining, according to CRU estimates.

Established AN consumers are diligent in their adherence to regulation
The global AN industry has well-established safety regulations for both fertilizer and industrial (civil explosives) use. More than 50 Mt of AN is consumed globally each year, with around 9 Mt traded in the seaborne market. AN is a safe product to handle when done so appropriately and the overwhelming majority of the industry operates incident free. Large quantities of AN are used as fertilizer in Europe, Russia and Brazil, and its share of total nitrogen fertilizer demand is growing.

However, the volatised nature of AN coupled with a handful of high-profile incidents involving its explosion have led to strict regulations and even a ban on its use as a fertilizer in several countries. The use of AN as an explosive for mining extraction is a highly specialised application and suppliers typically operate tighter-than-regulated safety practices in the distribution and detonation of AN.

Fertilizer grade AN (FGAN) can be explosive under certain conditions, but in countries where its use as a fertilizer is established, appropriate storage and handling techniques are embedded as part of the application process. Typically, countries that allow the production and use of FGAN regulate its use to avoid unintended catastrophes.

A port handling case study: Tianjin explosion in 2015
This week’s incident in Beirut will no doubt draw comparisons with another high-profile port explosion involving AN. In August 2015, a series of chemical explosions took place at a container storage station at the Port of Tianjin, China, including the detonation of 800 t of AN. The explosions killed 165 people, injured 798 others and caused a US$1.1 billion financial loss to the Tianjin Port Authority.

Following the Tianjin port explosions, the Chinese government introduced increased nationwide restrictions on the production, sale, transportation and exports of AN and other hazardous chemicals. In 2017, Qingdao port authority significantly reduced exports of AN, as per requirements laid out by the Ministry of Transport and the Shandong government. Such measures have also been incorporated by other ports as shown in the map below. 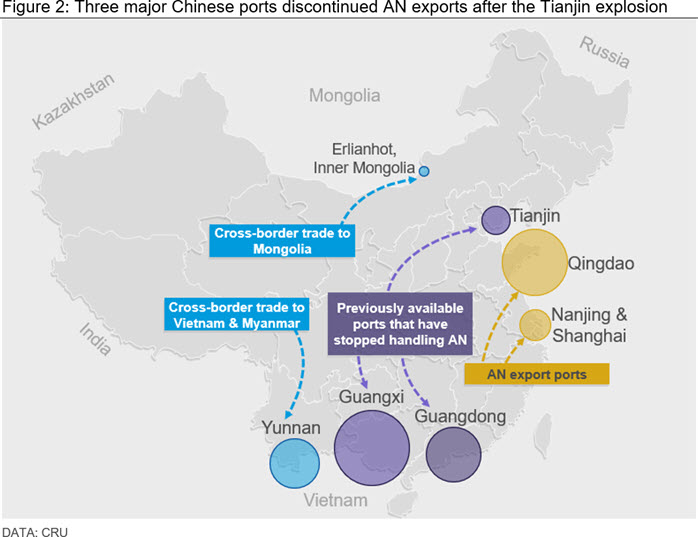 All Chinese ports that have facilities to store hazardous chemicals have been required to increase supervision of AN following the Tianjin Port explosions. Railway authorities have also limited the number of railway stations that are authorised to accept deliveries of AN. By April 2017, there were only 19 railway stations in China permitted to handle AN. New regulation was also introduced mandating that two supercargoes must chaperone every four railcars of AN (approximately ~240 t) during its journey. Truck deliveries of AN also faced more stringent regulations in the aftermath, estimated to have raised local delivery costs by 40%. Such regulations have directly reduced the sales of AN within China.

An “illicit use” case study: Turkish AN ban
When an explosive incident occurs in a region of the world with geopolitical fragility, such as the Middle East, it can raise suspicion of there being a malicious cause. AN carries unfortunate connotations of being used as explosive weapons in Turkey, Syria and Pakistan in recent decades. However, the region is not alone in recording rare instances of the misuse of AN for illicit means. Infrequent but high-profile terrorist incidents involving the misuse of AN have occurred in Europe, the US, Indonesia and others in the last 30 years.

A recent case study of regulation introduced to combat the misuse of AN is in Turkey. In efforts to abate security concerns over the explosive nature of AN, the Turkish government banned the sale of AN for fertilizer use in June 2016 after a series of terrorist attacks were carried out within the country. Turkey was both a major consumer and producer of AN prior to the regulation and farmers have since substituted it for other nitrogen fertilizers, primarily urea and calcium ammonium nitrate (CAN).

A knee-jerk global reaction could hamper the use of an efficient nitrogen fertilizer
Incidents involving AN are often swiftly followed by a wave of stricter storage and handling regulations, with good reason in cases where AN has been mishandled or stored unsafely. However, an industry-wide overhaul in regulation is not deemed the best approach because several countries have a mature and efficient AN market. This is particularly the case for farmers using AN as fertilizer, which has several agronomic and environmental benefits over urea. The main advantage in using ammonium nitrate-based fertilizers is that the nitrogen is more rapidly available to crops.

Ammonium nitrate fertilizers contain two forms of nitrogen which benefit plant growth in different ways – half of the nitrogen it contains is in the form of ammonic N and half in the form of nitrate N. The nitrate component can be immediately taken up by crops providing an instant nitrogen dose, while the ammonic component provides a ‘slow-release’ effect allowing the plant to benefit from a nitrogen source over a longer period of time. As a result, a higher proportion of nitrogen is absorbed by the crop rather than being emitted into the atmosphere.

The following table outlines some of the safety measures for farmers/merchants/traders involved with handling and storing AN.

In some regions, the use of AN-based fertilizers is also being framed as a way to reduce atmospheric ammonia emissions in agriculture. Urea is the nitrogen product being most heavily targeted, due to it having the highest associated emissions.

Once applied to the soil, urea breaks down into ammonia, which is facilitated by a urease enzyme in a process called hydrolysis. This process causes ammonia losses which are then emitted into the atmosphere and ultimately has harmful impacts on the environment and human health. As a result, the use of nitrate fertilizers is being encouraged, particularly in regions such as Europe where there is an established infrastructure in place. 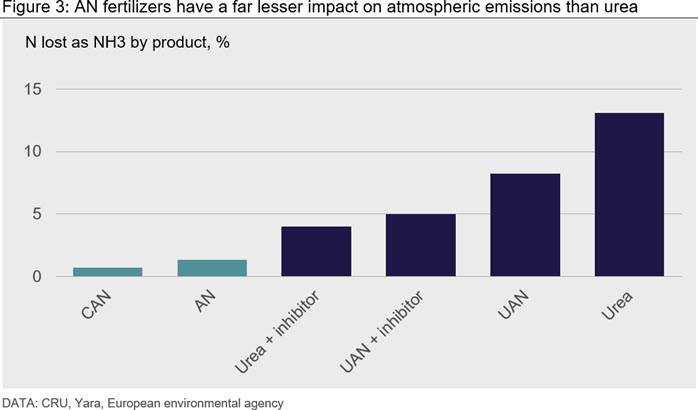 Could the Beirut explosion lead to more stringent AN regulation?
We think it is highly likely that officials in Lebanon will introduce strict localised regulations on AN once the country comes to terms with the devastation in Beirut. Initial reporting suggests a clear failure in AN storage procedures at the port and authorities will launch a more detailed investigation once the initial state of emergency has been handled. The regulation is likely to focus almost entirely on port storage, given that Lebanon has no domestic consumption of AN. Other major international ports not typically used to dealing with AN may also choose to review or reinforce their hazardous chemical regulations.