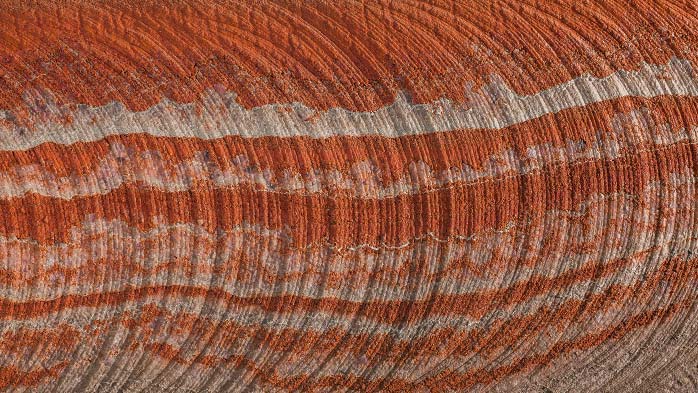 After a wait of more than 19 months, China’s importing consortium finally agreed a new potash contract on April 30.


Settled at $220 /t CFR with BPC, the new agreement marks a $70 /t decline on the previous contract and is only $1 /t higher than the decade-low 2016 contract. Although this underlines the magnitude of spot price erosion since 2018, it nevertheless sets a new floor for the market. Suppliers will now hope this finally brings stability to weak spot prices and ultimately tightens global product availability. However, with record high stocks already held in bonded warehouses – which exporters will be keen to clear – it will likely be months before China requires significant import volumes. Consequently, spot prices are unlikely to respond until much later in 2020.

Why did it take so long to settle a new contract?
More than a year and a half has passed since the Chinese importing consortium of Sinofert (Sinochem), Sino-Agri (CNAMPGC) and CNOOC, agreed the last potash import contract. This was signed on September 17 2018 at $290/t CFR. In the nearly 600 days which have elapsed since, global spot prices have plunged to multi-year – if not decade – lows as the potash market swung into oversupply.

Nowhere was the situation more acute than in China. MOP imports in 2019 surged to a 12-year high and domestic production in Qinghai exceeded 7.4 Mt for only the second time. This was despite actual consumption declining to a six-year low, leading to the accumulation of record high country-wide inventories by the end of 2019.

Optional volumes and seaborne import suspension led to a rush of arrivals in H2 2019
Different drivers led to the mismatch between gross supply (imports and domestic production) and actual consumption in 2019.

Following the arrival of initial volumes agreed under the 2018 contract, CRU understands Chinese importers agreed to receive optional volumes from suppliers during the first half of 2019. Chinese port wholesale prices reached three-year highs in late Q1 2019, and this is likely to have strongly influenced the decision to receive optional volumes. This maintained imports above 600,000 tonnes a month well into Q3, driving up port inventories to more than 3 Mt for the first time since 2016.

The heavy arrivals amid weak domestic demand led importers to call a halt to most seaborne MOP imports, with a suspension on loading at export points implemented from 1st September. However, the action led to a surge in imports in September as suppliers rushed to get product through Chinese customs. Port inventories exceeded 3.2 Mt for the first time in October. Since then, exporters have continued to deliver product to bonded warehouses in China, which hold potash ahead of clearing customs. The Covid-19 outbreak in China during Q1 did little to slow MOP imports but did hinder distribution of product to downstream consumers. Port stocks in February 2020 peaked at a record 4.15 Mt.

Additionally, importers were granted access to China’s 1.4-1.5 Mt “strategic reserve” for the first time during the epidemic to ensure the continuation of product availability. Port inventory data shows importers accessed the reserve during March and April, ultimately allowing them to wait a further two months before finally settling the new contract.

Demand has not been strong enough to keep pace with imports in 2019 and early 2020. This is highlighted best by the volume of product moved out of port inventories compared to net imports (with re-exported volumes stripped out). Ultimately, China imported 1.8 Mt more MOP in 2019 than it consumed; a record disparity, according to our estimates. 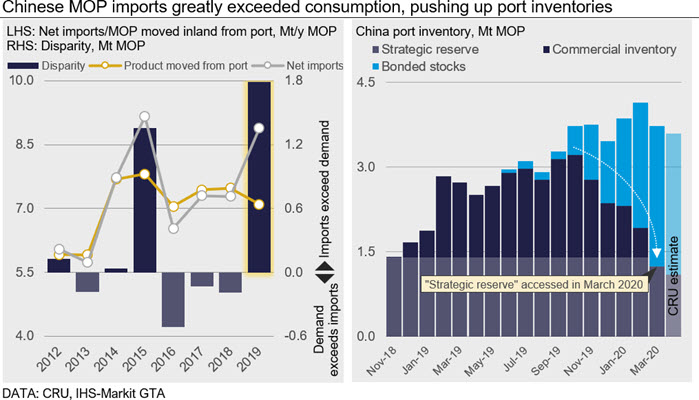 QSL’s financial woes added to oversupply
Since 2016, domestic producers in Qinghai have supplied around half the country’s annual MOP demand. Qinghai Salt Lake Industry (QSL) – by far the largest producer with an effective capacity of 5.8 Mt/y – ran into major financial difficulties in 2019 as the company failed to find a buyer for its loss-making business segments. QSL maximised MOP production – which remains profitable – in response, achieving record output of 5.6 Mt. Although this was partially offset by lower production elsewhere in Qinghai, total Chinese domestic MOP production reached its second ever highest total of 7.4 Mt.

In a further demonstration of the weakness in Chinese potash demand in 2019, sales of domestically produced MOP were around 1 Mt lower than production. CRU estimates supplier inventories in Qinghai – like those at ports – reached record highs by the end of the year.

New contract returns importer margins to profit
High inventories began to pressure Chinese domestic (port wholesale) prices after February 2019. Prices have consistently declined since, in line with other global MOP spot prices, all of which currently stand at multi-year lows. Chinese importers generate revenue on domestic sales of imported potash through the differential between the port wholesale price and contract price. To return positive margins, the differential must be wide enough to cover importer costs (such as handling and VAT). As the contract is denominated in US dollars, but domestic prices in Chinese RMB, importer margins are also exposed to currency volatility. 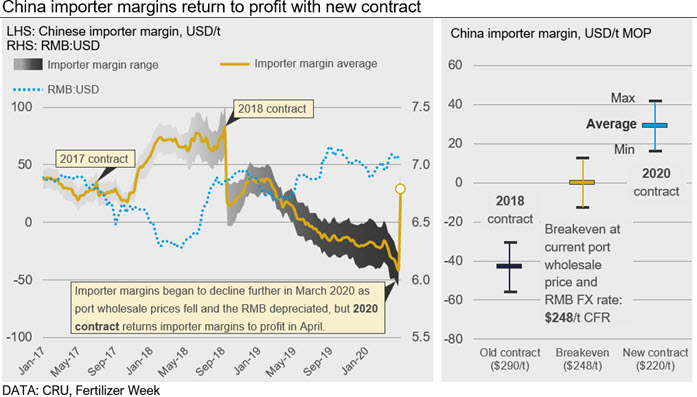 As port wholesale prices slipped, and the RMB depreciated against the US dollar – falling to well below 7.0 during Q3 – CRU assesses that average importer margins turned negative by the end of June. They moved gradually lower through the remainder of 2019 but plunged further in March 2020. This was a result of downstream consumers holding back from purchases during the peak spring demand season in anticipation of a new contract, which would unlock the 2.5 Mt bonded inventories.

Sliding port wholesale prices and a weak RMB have clearly bolstered the importer argument for a larger reduction in the contract price. Additionally, Asian standard-grade MOP demand remains underwhelming in 2020; Indian imports are slowing as its previous import contract runs down, while Southeast Asian markets respond to Covid-19-induced economic and social stagnation.

With other standard-grade MOP markets so quiet, CRU takes the view suppliers ultimately had little option other than to agree to the pricing demands of the Chinese importing consortium. Waiting any longer could have resulted in an even lower price.

The new settlement at $220 /t CFR is only $1 /t higher than the decade-low 2016 contract. Although a negative for producers, the $70 /t decline from the previous agreement returns importer margins strongly to positive territory. Based on current port wholesale prices and the RMB:USD exchange rate on April 30, we estimate the new contract shifts average importer margins from -$43 /t to +$29 /t. The slightly greater than $70 /t difference is because the lower contract price also reduces importer costs.

New contract brings price stability, but not tight supply
Although settled lower than many producers would have hoped, suppliers will now be able to use the new $220 /t CFR contract as a price floor across other markets. Initial focus will be on Brazil, with granular MOP prices currently residing at a decade low average of $215 /t CFR. Indian contract negotiations are also likely to resume. CRU expects global spot prices to adjust in the coming months, with the Brazilian benchmark rising slightly, but prices in Southeast Asia correcting lower. At such low prices, potash affordability is very favourable, and this typically encourages increased purchasing activity. Additionally, consumers in spot markets may commit to purchase more MOP now – as is already occurring in Brazil – ahead of potentially tighter supply in the coming months as producers turn their attention to supplying China. 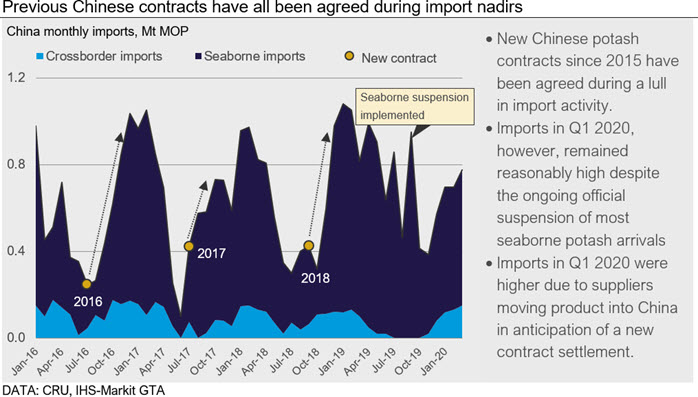 The last three China contract settlements all occurred during a lull in Chinese MOP import activity with port inventories at or close to level of the strategic reserve. Arrivals have typically increased sharply almost immediately after each agreement as importers replenish stocks. The Asian contract markets since 2015 have proven vital outlets for suppliers during the seasonally quieter second half of each year.

However, the 2020 contract arrives amid a very different situation. Not least, Chinese port inventories remain very high at an estimated c. 3.6 Mt at the end of April and far higher than they have ever been at the signing of a new import contract. Although importers will quickly take ownership of the bonded stocks, this will immediately fill their warehouses with c. 2.5 Mt of new inventory, equivalent to around three to four months-worth of imports.

Importers will be keen to draw these down before receiving significant fresh supply. CRU estimates the bonded warehouse stocks alone (without any new imports) would be sufficient to meet Chinese MOP consumption throughout the entire quarter. There are also concerns that the glut of product moving into importer warehouses could pressure port wholesale prices even lower. This would encourage importers to slow sales of MOP in an effort to raise prices and improve margins, potentially further delaying the need for fresh imports. 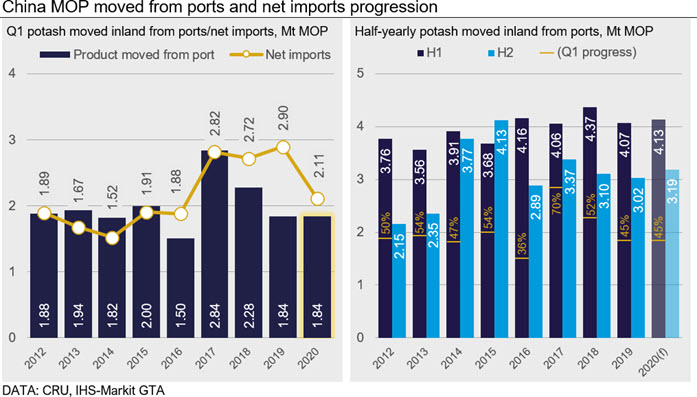 New Chinese contract the first step to tighter supply
We take the view that the new Chinese import contract will not result in tighter supply, and a sustained rise in spot prices, until at least mid-Q3 this year. Current port inventories combined with continued high domestic production indicate China is more than amply supplied for the remainder of Q2.

It is important to note that tighter global supply does not solely rely on higher Chinese import requirements. Continued strong demand from Brazil in addition to improved consumption in India and Southeast Asia will be just as crucial if suppliers want to induce a turnaround in global MOP prices. Plenty of risk remains in all these regions as they navigate through the economic impacts of the Covid-19 pandemic.

Nevertheless, the absence of a new Chinese import contract has been the glaring omission from the market since the middle of 2019 and has undoubtedly contributed to oversupply elsewhere. Producers will breathe a collective sigh of relief that Chinese import demand will return once again, even if it is not immediately.