This comes only 13 months after the US Department of Commerce published AD and CVD orders on imports of common alloy sheet from China.

If the case goes through in full, this will remove 68% of total 2019 US common alloy imports from the market. However, 2019 was not a normal year in terms of import volumes, with a significant amount of such imports piling up in distributor warehouses. Looking at 2018, a year when US and Canada common alloy-producing mills were running at capacity, imports from the in-scope countries totalled roughly 500,000 t. Additionally, a surge in Chinese imports ahead of the pending AD and CVD occurred from Jan-Apr 2018, amounting to roughly 130,000 t. The combined total of 630,000 t is what the US market will be looking to replace following the current investigation. Recent investments by Arconic, Texarkana Aluminium, and JW Aluminum will help to close the gap, but further investments will be needed in the future.

European mills will find themselves in the eye of the storm
8 of the 18 countries in the crosshairs of the US dumping investigation are in Europe. The good news is that the mills operating in these countries do not have a significant exposure to the US market. Germany leads the way in terms of exported volume to the US at over 100,000 t in 2019. However, Greece has arguably the most to lose, with more than 70% of the country’s production being exported, 17% of which is destined for the US. The loss for the German mills will be felt most on 5xxx-series automotive body sheet exports to German automakers in the US.

The big problem with the 8 European countries in-scope is not really their exposure to the US market, but their lack of diversification. More than 80% of German exports stay in Europe. Also staying in Europe is 65% of Greece exports, and most exports from Croatia, Italy, Romania, Serbia, Spain, and Slovenia. And that is only the European mills. Adding to the pain is the fact that Europe is the second largest destination for Bahrain exports, and the main destination for exports from South Africa. Also, more than 75% of Turkey’s exports go to Europe and Italy so happens to be the largest trading partner for Egypt, accounting for 72% of the country’s exports. It is also conceivable to assume that Bahrain and Oman will be looking to place volume in Europe given the current lack of suitable alternatives. And we did not even mention China yet, which has diverted a tremendous amount of exports to Europe following the initial common alloy dumping investigation in the US targeting Chinese mills. 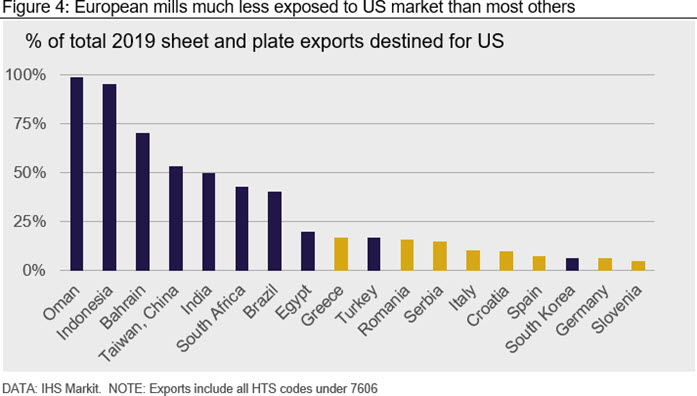 So, while European mills accounted for only 33% of total exports from the in-scope countries to the US in 2019, they also have the most to lose once trade flows adjust. The question becomes, will Europe ultimately act in a similar way to protect local producers? If not, just as US mills were negatively impacted by the flood of imports that ultimately led to the current dumping investigation, European mills should be prepared for a similar result.