Understanding the shape and nature of the Covid-19 cycle will be critical to commercial success, and in some cases survival, for many industry players. While debates commonly centre on pathways back to normality (e.g. V, U, W, L shaped recoveries), these ignore the potential for major shocks to induce fundamental changes in the market.

The most successful businesses remain agile and anticipate structural change amid “noisy” market signals. This means focusing on the end-state of a crisis and avoiding herd behaviour. In this insight, CRU Consulting outlines possible scenarios which may shape the future of our industries. These are intended to help management teams to navigate such unprecedented circumstances. The potential strategic implications of these scenarios for different firms and industrial segments is discussed in a companion piece.

The Covid-19 crisis is decisively impacting our businesses and industries…
Since its discovery in Wuhan province in China in late 2019, the virus has spread to over 200 countries and territories, infecting – at time of writing – over 2 million people and resulting in over 150,000 confirmed deaths. The macroenvironment has deteriorated markedly and at an unprecedented pace: in the US, for example, over 20 million workers claimed unemployment benefits in just a month. These challenges have required policy makers to restrict freedom of movement and massively extend social safety nets – responses so fundamental they may have broader implications for the future role of the state.

This crisis has critical, and potentially unforeseen, implications for the mining metals and fertiliser industries, including severe and rapidly evolving operational issues: entire segments of the mining industry, for example in South Africa have been forced to halt production. Moreover, new sources of contagion and social distancing policies are impacting the industry daily. CRU is currently working overtime to help our clients understand the extent and nature of this rapidly evolving crisis.

A robust and “risked” view on the cycle is key
Understanding the shape and nature of this cycle will be critical to commercial success, and, for many industry players, survival. It is tempting to think of the upcoming commodity cycle in terms of different paths back to market conditions existing just prior to the shock (e.g. evident in the common debate between V, U, W, L shaped recoveries). It is normal human behaviour to anchor on the known, recent past.

However, significant shocks can fundamentally change patterns of demand and supply, including longer term technology adoption, competitiveness and market structure (such structural changes were evident in metals markets following the early 1990s recession, for example). Government and public policy also tend to play a more fundamental role, with potentially significant impacts on commodity demand (the scale and impact of the 2009-10 Chinese stimulus package being a case in point).

Figure 1 provides an overview of recent global recessions and their impact on iron ore, copper and aluminium market drivers. They highlight the diversity of macro impacts: the 2008 crisis caused a deep drop in GDP relative to previous cycles, but had relatively muted impacts on employment. By contrast, intensity of mineral use rebounded more rapidly, in part due to heavy counter cyclical infrastructure spending. In terms of supply, capital spending has been slower to recover following the 2015 down cycle relative to previous contractions, despite its more modest demand impacts, particularly in base metals. 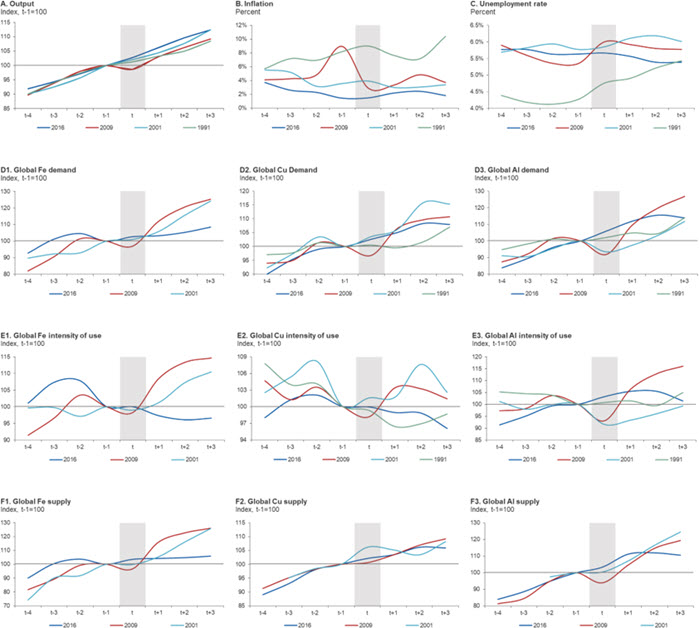 The most successful businesses remain agile and anticipate structural change amid “noisy” market signals. Ensuring a strategic and objective focus on the end-state of a crisis rather than a return to the past means avoiding herd behaviour and “group think”. Those that act early or countercyclically are often rewarded – such as those that bought assets when the industry was depressed in the mid 2000’s, prior to the China boom. By contrast, such characteristics were lacking from decision making by many of the major miners during, and in the aftermath of, the financial crisis, who – following some initial destocking and demand destruction – failed to identify opportunities from the Chinese policy response resulting in delayed and inefficient investment. Equally, once adopted, this shift to growth by the industry was difficult to reverse going into the 2015 downcycle.

Leaving “group think” behind: post Covid-19 scenarios
The Covid-19 crisis places us all in precedented circumstances. This is abundantly clear when considering viral risks to productive operations and the massive unemployment that has ensued almost overnight as a result of policy efforts to control the endemic. Despite this, many of the toolkits for strengthening decision making in the face of such deep unknowns are well established. Developing scenarios which explore the key sources of uncertainty, and evaluate objectively the potential implications for our markets and businesses – ideally with input from a range of stakeholders and individuals who are less likely to be encumbered by entrenched positions or tradition thinking – are a key building block towards coherent, resilient and adaptive strategies.

In an effort to support our clients in these difficult times, CRU Consulting have developed 3 scenarios – labelled “Bump in the Road”, “Disorderly adjustment” and “Managed Adaptation” – which can form the basis of strategy development and implementation. These draw on deep and internally consistent analysis into the complex range of interwoven factors shaping the impacts of Covid-19. These include: the extent of the underlying contagion risks; the scale, form and timeliness of policy interventions; and the associated behavioural and investment responses of households and firms. A brief overview of our scenarios narratives and core drivers is outlined below.

Disorderly Adjustment: A world characterised by poorly coordinated policies and elevated social and economic tensions. Social distancing policies and expanded social safety nets are gradually scaled back and targeted at vulnerable groups following affordability constraints. Richer countries and social groups are generally more successful at mitigating contagion and economic dislocation. This fuels political and social tensions across and within societies. Green shoots in consumer spending and sectors most impacted by “lock downs” emerge as restrictions are lifted, but the recovery is slower and more volatile due to a lack of consumer/ investor confidence.

Bump in the Road: Economic and social business as usual resumes relatively quickly, subject to modest economic headwinds. Growth in immunity and limited health risks enables swift and permanent relaxation of social distancing and wider support policies. The economy rebounds – supported by sustained public investment programmes and a return of consumer and investor confidence and associated activity indicators. Public and private balance sheets, while significantly weakened, gradually recover without exposure to other major shocks. Behavioural shifts among consumers and producers quickly fade away.

Towards actionable insights and strategies….
Scenario development is a key tool in assessing the potential implications of the Covid-19 crisis for both markets and assets. As such, it can provide essential support for effective decision by assisting businesses to remain agile and anticipate structural change amid “noisy” market signals. These opportunities are discussed further in a companion piece focusing on the identifying and interpreting the implications of these scenarios for corporate decisions.