Silver is not for the fainthearted

Silver is not for the fainthearted..

The silver price has rallied 140% since hitting multi-year lows in March 2020. Having exposure to silver is not for the fainthearted – the price roller-coaster has been driven by favourable macro conditions, strong safe-haven demand and bargain-hunting. We've undertaken a SWOT analysis of the silver market to summarise how this market is likely to perform over in the short to medium term. 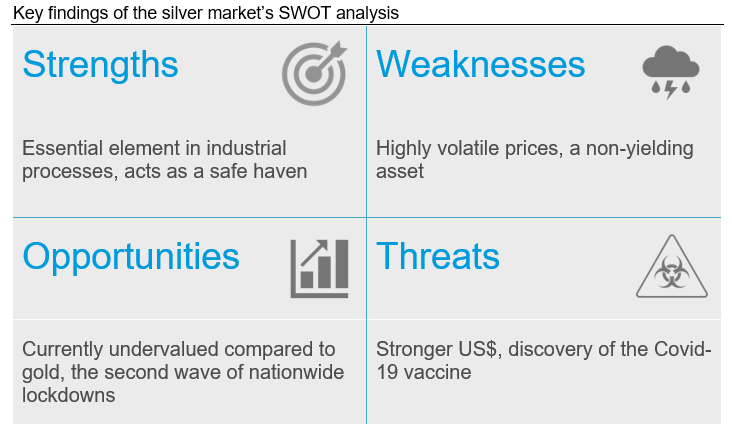 Thanks to its exceptional thermal and electrical conductivity, silver is an essential component of industrial and commercial activity, which accounts for more than 60% of its physical consumption per year. In comparison, only 10% of gold is used in genuine industrial applications.

Silver’s safe-haven credentials can attract a fair amount of capital inflows during times of increased market uncertainty and high volatility.

Thanks to its much lower per-unit price, many retail investors favour silver as a more accessible version of gold.

Because of its relatively small size in value terms, the silver market is prone to greater volatility on light trading volumes, which often leads to sharp price moves in either direction (depending on personal risk tolerance, this could instead be viewed as a major weakness rather than a strength).

Silver still has an image of a ‘poor man’s gold’, with the silver market receiving far less press attention than its yellow cousin.

The silver market tends to be dominated by retail investors and attracts less interest from institutional investors, if compared to the gold market.

A hybrid nature of silver – a safe-haven asset and an industrial commodity – makes it more sensitive to changes in global business cycles as well as in its own fundamentals.

The silver market’s small size in value terms, if compared to gold, and its proneness to greater volatility on light volumes, represent a potential psychological barrier for new investors.

69% of the worlds mined silver production is associated with base metal mining, meaning that silver miners as a group have little control over metal liquidity, and their ability to influence international silver prices is limited.

Unlike cash, stocks and many other financial instruments, silver is a non-yielding asset holding which may attract opportunity costs.

Silver is currently finding itself in a sweet spot drawing strength from its two key narratives: 1) being a safe-haven and 2) being an industrial metal. It is a rare combination, hence such a strong increase in prices over a short period of time.

Opportunities as a safe-haven

Unprecedented liquidity injections by central banks raised concerns about currency debasement amongst investors whilst heavy interest rate cuts by the Fed and some other central banks dramatically reduced the opportunity cost of holding silver, making it more competitive with other interest-bearing financial instruments and sparking strong investment demand.

A spike in inflation expectations on the back of a new monetary stimulus may boost investment demand for silver.

Ability to gain market share from traditional gold investors based on the leverage potential and being viewed as relatively undervalued compared to gold; at the end of August a gold:silver ratio stood at 72, or well above its 50-year average ratio of 59.

Potential exists for further upside gains; unlike gold, which recently broke a price record in nominal terms, silver still has another $20-25 to run before it reaches the 2011 nominal high.

The second wave of infection accompanied by nationwide lockdowns (negative for industrial demand but positive for investment which is a key price driver).

Opportunities as an industrial commodity

The re-opening of European economies in June-July and recovering Chinese economy have sparked hopes of a swift recovery in fabrication offtake.

New uses for silver in medicine, automotive and 5G applications could potentially boost fabrication demand in the longer term.

Changes in Lead/Zinc mine supply outlook could affect supply of by-product silver and alter fundamental balance.

Further advances in thrifting could reduce the need for silver in industrial applications.

A major market meltdown (similar to the one witnessed in March) that would have a near-term impact on silver in the race for liquidity.

Faster development of the Covid-19 vaccine could bolster risk appetite on hopes of a faster recovery from a coronavirus-driven global economic recession (positive for industrial demand but negative for investment which is a key price driver, and weaken demand for safe-havens, including silver.

Stronger US$. Once the US Congress agrees a second stimulus package and the virus is brought under control in the USA, the dollar is likely to strengthen (albeit modestly) against the euro.

The silver price is currently going through a consolidation phase, which is natural as some investors have decided to book profits after a period of a strong performance. This year’s price rally on the silver market was not sparked by its fundamentals, which waned in importance at a time of increased volatility in financial markets. So far, strong investment demand has more than offset weakness in fabrication demand. Although silver industrial demand is slowly recovering, it is far below its normal levels. A change in investor sentiment could stall and/or potentially reverse the recent price rally. That said, we continue to view the macroeconomic environment as constructive for silver which we expect to trade in the range $25-$30/oz through the remainder of the year, potentially breaking through the $30/oz threshold.