The surprise $33 /t rise in the headline price of India’s potash supply contract on 5 April – barely two months after it was initially agreed with BPC at $247 /t CFR – has placed pressure on Chinese importers to follow suit.


However, the country’s importing consortium is reportedly reluctant to do so, wary such actions could undermine the annual contract system from which it has reaped significant financial benefits. China’s iron ore industry witnessed the disintegration of its yearly import contracts after 2010, and potash importers will be keen to avoid history repeating itself. Yet the key driver behind the breakdown of the iron ore contracts – with volumes agreed under the contracts insufficient to meet domestic demand – is not currently in play in the country’s MOP market. Nevertheless, China is set to become increasingly reliant on imported MOP beyond 2021. The consortium may need to show increased flexibility with pricing now to discourage consumers and suppliers from circumventing the contract system in the years ahead.

The sudden change in the 2021 India MOP supply contract price on 5 April – barely two months after it was originally agreed by BPC at $247 /t CFR – came as a surprise to many in the potash industry. Although not unheard of, it is exceptionally rare for the headline price of a potash supply contract in India or China to change before its expiration.

Regardless, the $33 /t rise in the India contract to $280 /t CFR will be welcomed by suppliers after a number publicly condemned the initial $247 /t CFR price, which BPC settled with both Indian and Chinese importers. Other exporters subsequently refused to agree contracts at the $247 /t level.

In addition to the settlements struck by ICL and BPC at $280 /t CFR, CRU now expects Canpotex, Uralkali, Arab Potash and K+S to agree fresh contracts at the same price with Indian importers in the coming weeks.

The focus now turns to China and whether the country’s potash importing consortium will follow suit and agree to contracts with other suppliers above $247 /t CFR. That their Indian counterparts were willing to change the price of an existing contract indicates there is scope for Chinese importers to do the same. Yet, they will be acutely aware such action could undermine the annual contract system from which the consortium has, according to our analysis included in this Insight, reaped significant financial benefits.

Despite the protestations of its competitors, the original contract price BPC agreed with IPL (Indian Potash Ltd) in late January was agreed in line with Southeast Asian spot prices at the time, as is typical. What most frustrated other suppliers was how BPC seemingly ignored a variety of market signals indicating international potash spot prices were set to rise significantly in the coming months. The best strategy for producers, it appeared, was to wait until later in the year to settle new contracts.

Fast-forward to early Q2 2021 and most international spot prices are climbing. Those in the US had already been on the rise since Q3 2020 and this finally filtered through to key import benchmarks in Brazil and Southeast Asia earlier this year.

CRU forecasts spot prices to continue rising into at least Q3 2021 (CRU subscriber only). The higher India contract price adds to already bullish pricing sentiment; and with producers now likely to direct volumes to India in the coming months, this will only intensify already tight supply. 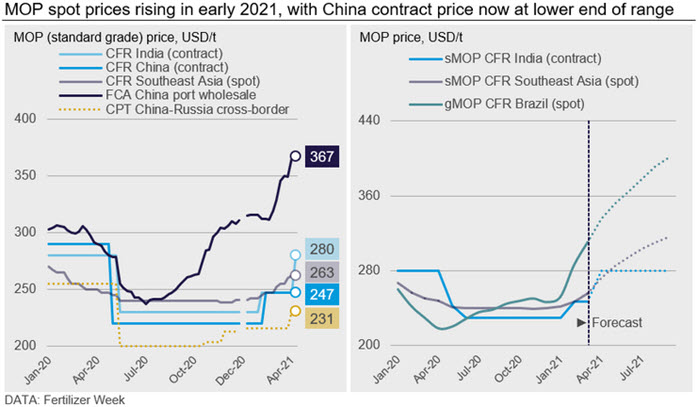 The surprise $33 /t rise in the headline price of India’s potash supply contract on 5 April – barely two months after it was initially agreed with BPC at $247 /t CFR – has placed pressure on Chinese importers to follow suit. Unless spot prices deviate substantially from our projections in the coming months, Chinese importers will not be able to agree any further contracts with suppliers at $247 /t CFR. Moreover, international exporters will be fully aware of how high Chinese port wholesale prices – and therefore importer margins on domestic sales of imported MOP – currently are. CRU estimates importer margins in April average around $85 /t MOP, their highest since at least 2014. Consequently, overseas suppliers to China will want a slice of those margins themselves through a higher contract price.

Yet, for importers, there is potentially more at stake than a few months of slightly narrower than expected margins. While CRU is aware of at least one previous example of the India contract price changing during its stipulated duration (in September 2013), to our knowledge this has never occurred with the China contract. Some previous settlements with China have lasted considerably less than 12 months, but any price change has required the agreement of fresh contracts with suppliers.

Should Chinese importers agree to a higher price just weeks after an initial settlement, they may be concerned of the consequences of such actions. Specifically, they will be wary of handing an additional tool to suppliers to change the price of an existing contract before its expiration. Longer-term, this could lead to the breakdown of the annual contracts and to the establishment of shorter-term contracts or even import spot pricing instead.

The country’s iron ore industry witnessed this exact progression after 2010. The long‑established order of annual contracts between Chinese importers and international producers was gradually replaced by shorter-term quarterly and then monthly deals as demand soared leading consumers to source iron ore from a wider variety of suppliers.

China’s potash importers will be keen to avoid history repeating itself. Importing MOP under contract has generally allowed them to generate wider average (annualised) margins on domestic sales of imported product, compared to if they had imported it on a spot basis. In other words, MOP exporters to China would have potentially gained a bigger slice of the importers’ margins had they supplied the country on a spot basis.

It is important to note our analysis only provides a simple indication of the potential differences between Chinese importer margins under a contract or spot system. We have used Southeast Asian spot prices in our calculations but, in reality, there would be disparities between the import spot price in Southeast Asia and in China, if one were to exist.

Additionally, the progression of port wholesale prices would be different if China imported MOP on a spot basis as the supply and demand fundamentals of imported product would not be the same as under the contract system. Finally, our analysis provides simple annualised averages of importer margins and these are not weighted to account for volumes sold.
Non-contract imports remain a minor source of potash supply for China

While agreeing to change the headline price of the 2021 contract could open the door for exporters to China to increase the frequency of future price changes, it is unlikely to lead to an iron ore-style breakdown in the contract system.

Firstly, China’s dependence on MOP imports has diminished since the early 2000s with the development of its domestic production industry in Qinghai. Today, the country relies on imports to satisfy around half its annual requirements, down from 85% in 2003. This is in complete contrast to the country’s iron ore consumers, which have become increasingly reliant on imports.

Consequently, China’s MOP consumers never undertook the same scramble for offshore volumes witnessed in the iron ore industry. MOP imports since 2000 have grown at a steady CAGR (2000-20) of 2.7%, whereas for iron ore the growth rate is over 15%.

Secondly, of those enterprises within China licenced to import MOP, there remains limited supply available to them from producers which do not currently participate in the annual contracts. China’s sources of non-contract imported MOP have, nevertheless, diversified to an extent since 2010. Supply from Laos began in 2012 and K+S has shipped product from the company’s Bethune mine in Canada since its opening in 2017. These have added to the long‑established railed deliveries from Russia which are priced under a separate mechanism to the seaborne contract volumes.

However, CRU estimates non-contract imports only account for around a quarter of China’s annual total. Furthermore, their share of this total has remained reasonably steady since 2010. There is little indication, currently, of non-contract imports becoming increasingly important.

Ultimately, of those drivers which led to the disintegration of China’s annual iron ore contract system, none are yet in play in its potash market. China’s importing consortium still controls around three-quarters of the country’s imports. If exporters wish to supply bulk seaborne cargoes to China, in almost all instances they will have to abide by whatever system the consortium wishes to use.

Moreover, there is no guarantee suppliers would necessarily prefer to provide MOP to China on a spot basis. The contracts allow producers to lock in sales months in advance for standard grade product and some may not wish to see the contract system break down (despite recent frustrations).

Nevertheless, in not signing further annual contracts with exporters other than BPC, importers are risking becoming short on supply in the coming months:

It is important to note, CRU has received reports that all contract suppliers to China, apart from Canpotex, have agreed to supply some volumes to country under the $247 /t CFR price. However, no supplier other than BPC has confirmed this, and the nature of these agreements is unclear. As such, we assume the deliveries would be somewhat limited. 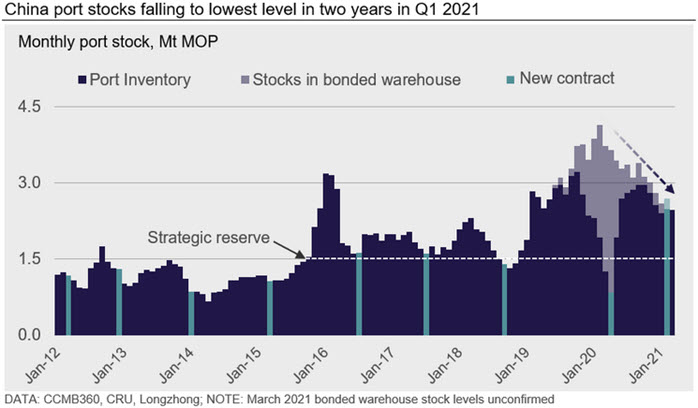 Regardless, the risk of import supply running low remains. Should consumers begin to struggle to secure product, many may look to increasingly source MOP from non-contract offshore sources. Importers not part of the consortium would be more than willing to supply product from non-contract suppliers and may even represent an opportunity for such non‑consortium importers to grow market share.

Over the medium-term, China will become increasingly reliant once again on imported MOP as resources in Qinghai become increasingly depleted. Additionally, MOP supply is set to become less consolidated beyond 2021, with capacity additions mostly from producers which have so far shown little interest in becoming involved with the annual contracts.

The upwards revision of India’s contract price presents China’s importing consortium with a dilemma. On one hand, they can accept an unprecedented change in the headline price of an annual contract – possibly opening to the door to suppliers to do the same more frequently in the future and eroding the financial benefits the annual system provides them. Alternatively, they can refuse but risk running short of supply and inadvertently directing their consumers to non-contract sources of MOP.

Both options may have some impact on the future functionality of the annual contracts. Yet the latter course of action, in CRU’s opinion, is most likely to have the longer-lasting effects. What ultimately led to the breakdown of the contract system in China’s iron ore industry was the inability of those contracts to match supply with domestic demand.

Although sources of non-contract MOP imports available to Chinese importers are currently limited, they are set to grow in importance in the coming years. Furthermore, domestic production in Qinghai is expected to gradually decline. Should the country’s importing consortium wish to maintain the contract system over the longer term, it will likely have to engage new suppliers in the negotiations. Moreover, it will need to avoid supply shortages for its own consumers, reducing their need to seek alternative sources.

To do so, however, may require greater flexibility from importers with pricing. Undoubtedly, both incumbent and prospective MOP suppliers will be watching developments closely to see if China’s importing consortium opts to make such concessions, or not, in the coming weeks.