Dissecting the post US election shake up of the copper market 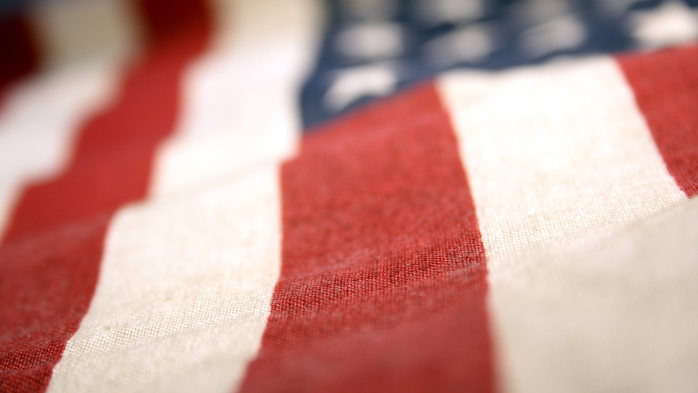 
Had you told anyone connected with the industry that within a month the price would have touched $6,000/t, it would have elicited various responses, most of which would probably have been unrepeatable on the printed page.

Much has been made of copper's participation in the "Trump reflation trade", which foresees an expansionary fiscal policy (increased spending and tax cuts) and lower regulation driving higher US growth and prices. The principal question is whether all this is really justified.

Some difficult mathematics
The USA currently consumes around 1.6Mt of refined copper per annum. That number is actually similar to the peak levels (1941-1944) reached during the Second World War. It is also around 45% below the late 1990s zenith, since when the combination of a shrinking metal-bashing manufacturing base, some strong substitution trends in certain sectors such as plumbing tube and the residual effects of the 2008/09 global financial crisis have eroded demand. From a global perspective, the USA today, while not a minnow, does represent just 7% of world consumption. Put in another way, for the country to wipe out next year's forecast global market surplus of just over 300,000t, consumption would have to increase by nearly 20%. The USA does have some historical peacetime precedent here, but you do need to go back forty years or more and most obviously to the long expansion of the 1960s or the 1930s New Deal era. 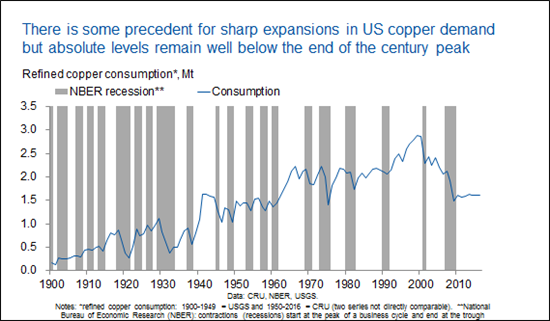 Infrastructure spending: cement, tick; steel, tick…but what about copper?
Of course, it is obvious to point out that for practical reasons any significant change to US copper demand resulting from policy shifts under the new Presidency is more likely to be a 2018-onwards story rather than 2017. We have posted our immediate thoughts on general economic growth prospects in a recent Insight entitled "Shock and awe as US elects President Trump". Beyond that, two of the central pillars of the Trump Presidential campaign, namely infrastructure spending and trade policy, in particular could have a measurable effect on the country's use of copper.

Much has been made of the headline grabbing $1trn infrastructure plan, but careful attention needs to be paid to where precisely any investment will be targeted. The lack of detail currently available does not help, but the suspicion is that for materials this will be more a cement and steel driven spending splurge. Apart from the rhetoric in the Presidential campaign itself, our thinking here is based on the fact that according to American Society of Civil Engineers (ASCE), the USA requires an additional $1.44trn of investment over the next ten years (2016-2025), on top of the $1.88trn of committed funds, in order to upgrade the country's infrastructure. However, of this funding gap, $1.10trn or just over three-quarters is in the surface transportation sector, where the focus is likely to be on highways and bridges rather than additional copper-hungry high-speed rail networks, for example. The National Association of Manufacturers' "Building to Win" report, cited in the Trump campaign, contains a similar message.

Meanwhile, the environment is not expected to be a winner under the new administration and hydrocarbons should gain at the expense of renewables. The "America First Energy Plan" would benefit the former, while the prospective canning of the EPA-sponsored "Clean Power Plan" and possible withdrawal from the recently signed Paris Climate Agreement would undoubtedly hurt the latter. The copper industry has put great stock on renewables as a future growth driver for demand. After all, a full battery electric vehicle (BEV) contains three times as much red metal as a light vehicle powered by an internal combustion engine, while offshore wind and solar contain approximately seven times as much copper per megawatt (MW) of installed capacity as fossil fuels.

Assessing how trade tariffs might hit
The possibility of 45% tariffs on imports from China and the renegotiation or ending of NAFTA, along with the imposition of 35% tariffs on imports from Mexico has certainly grabbed the headlines. If these measures were imposed on raw materials and intermediate products as well as downstream goods, the copper supply chain would be affected to some extent. The USA imports around 40% of its refined cathode requirements, of which just over 40% is from either Canada or Mexico. However, wirerod is the only semi-finished product that is imported in any significant volume, primarily from Nexan's Montreal facility in Canada, with only around 20,000t/y arriving from Mexico. The USA is also an exporter of over 100,000t/y and 200,000t/y of refined copper and wirerod respectively, the overwhelming majority of which is sent to either Canada or Mexico.

However, the trade links with NAFTA do not stop there, as each year the US imports and exports several hundred thousand tonnes of metallic wire and cable. Mexico is again the largest trading partner, with low voltage energy auto-harnesses, for example, sent across the border to assembly plants in the USA. Go further down the supply chain and you need to factor in vehicle imports from Canada and Mexico as well, which includes approximately 2.5M auto units per annum alone. Indeed, the automotive industry more generally is just one example of the highly integrated and complex supply chains that exist under the auspices of NAFTA, and highlights the potentially high political and economic cost of unpicking parts or all of them.

So far, we have not mentioned China and that is simply because for refined copper and semi-finished products there is very little in the way of trade with the USA, although the country does account for approximately 70% of US copper scrap exports. Obviously, if you were to consider the copper contained in further downstream investment and consumer goods then the trade ties between the two countries would appear much stronger.

Conclusion: Adding some global context
Even assuming a best-case improvement in domestic macroeconomic fundamentals, the lack of a strong copper-specific infrastructure story in particular does not suggest that the US Presidential election alone can be behind the recent rise in the copper price. As we highlight in the latest CRU Copper Monitor, fundamentals appear to be taking a back seat for now, although there has clearly been a wholesale rejection of the weak China demand and strong mine supply story that dominated the market in the first half of the year. Chinese consumption, which at 10Mt plus is nearly seven times larger than that of the USA, is now estimated to have increased by almost 5% in 2016, while recent production problems at some of the world's largest mines have brought disruption rates back into line with expectations. However, for now, Chinese fund flows, Renminbi depreciation and political statements (as opposed to actions) from US and Chinese governments in particular, appear to be holding sway over the market and supporting the price.