Manganese metal price hikes – a storm in a teacup?

The market reacted with customary ardour: EMM offers rapidly spiked, creating a fertile ground for speculators, and as all material for shipment was halted, spot deals were confirmed as high as $2,400 /t DDP Europe, with offers reportedly $300-400 /t higher still.

TMI’s future remains uncertain, and as the dust settles, the prevailing narrative seems to be focused more on the rooting out of political corruption than TMI’s own finances. Nonetheless, the whole ordeal has one major takeaway for manufacturers: that the supply and price of manganese metal remains hugely vulnerable to market and policy-driven shocks in China, creating regular intervals of strong price volatility – as shown in Figure 1. 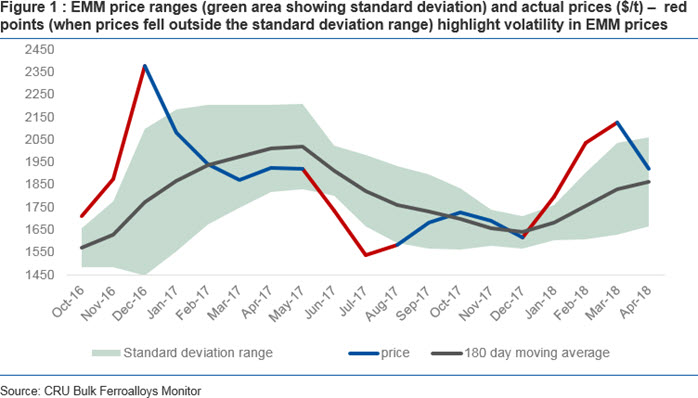 Yet whilst this most recent bout of price volatility has had a defining driver in the form of TMI’s uncertain future, this is far from being the single factor affecting supply; nor does the success or failure of the market hinge upon this scandal. In truth, it is the confluence of primarily policy-driven structural supply side developments and growth in consumption, including new demand from the energy storage sector, which compound the challenges inherent in a highly concentrated supply base and cast a constant spectre of volatility, a point that must not to be overlooked by manufacturers, developers and government planners.

Supply security is a pipe dream, despite EMM’s strategic importance
The key issue with the EMM market’s potential volatility is the material’s critical importance for manufacturing and the military industrial complex. EMM’s function in industry is simple yet crucial, fulfilling an important strategic role as a key alloying material in the manufacture of high strength steel for use in automobiles, heavy duty equipment (such as mining trucks), military and shipbuilding. These vital uses led the US government to classify manganese as a strategic metal back in 19871 – a definition it upholds to the present, with the USGS reaffirming its status as a critical product of strategic importance to US industry and national security in its most recent report on critical metals. This status extends beyond the jurisdiction of the US, with manganese metal holding a great importance for governments around the world.

This comes as little surprise when one considers China’s singular domination of supply. China has a veritable stranglehold; it controls around 97% of the global trade in EMM, which is a grave concern for manufacturers and consumers that is only compounded by the limited scope for substitution for most of EMM’s applications. In the face of such drastic exposure, there is little in the way of supply security, and as other nations’ once-vast strategic stockpiles dwindle, reliance on China merely becomes more pronounced.Supply risks are further aggravated by the fact that the market is highly concentrated even within the purview of China. A staggering 50% of global production comes from just two manufacturers, TMI and Citic Dameng, while around 35% of production relies on supplies from just one mine, located in Ghana. A force majeure event of any kind at these operations would have a considerable impact on the market, disrupting supply and potentially creating a deficit that would be hard to swallow without the protective cushioning of robust global stockpiles.

The big issue is that some form of disruption is a worryingly plausible prospect. The recent incident with TMI gave the market just one taste amongst a plethora of potential issues that weigh down on the supply side and Chinese producers may be concerned over what upcoming environmental inspections could mean for production. Unlike the steel, aluminium, ferroalloy and other processing industries in China, environmental inspections at EMM plants have been minimal to date, but as local and central government officials take a closer look at this highly polluting hydrometallurgical processing industry2, there is a real risk that production may be negatively affected. China’s environmental drive has caused a sudden, structural deficit in many commodity markets since 2016, and there are few reasons to believe that manganese metal will be different.

Moreover, even if the industry responds by meeting new environmental standards, there is a cost associated with new regulatory and environmental compliance. This will compound costs that are already mounting as a result of declining in-situ grades in China3 and escalating prices for power and diesel. We project processing costs (ex. feedstock) to increase by some 25-30% over the next 5 years - shown in Figure 5.

The outlook for demand continues to look positive, putting pressure on supplySuch uncertainty forms the backdrop for an expected increase in demand. With automotive manufacturers, EMM’s largest end-user, adopting new generation steels with more complex alloy requirements to save weight and improve strength, orders for high manganese plate in LNG and other vessels growing, and global 200-series stainless steel production increasing, growth in EMM consumption is expected to outperform that of the much larger ferromanganese sector. In addition to a positive outlook for traditional end-uses, there is also a new application with considerable potential on the horizon: battery consumption of electrolytic manganese dioxide (EMD) is predicted to be the fastest growing segment of manganese production worldwide with demand expected to grow from around 15-20,000t in 2017 to 130-150,000t in 2025 in a moderate EV uptake scenario, or around 8-10% of global demand.

Some steelmakers have shown reluctance to switch from using refined ferromanganese to EMM even when the premium for EMM reversed and it became cheaper to buy metal than to buy ferromanganese, such as in H2 2017. There is a price associated with security of supply issues, changing equipment, recipes and suppliers which creates resistance in this market.

The storm may be over for now, but expect further turbulence in this evolving market
While it appears that the fallout from the financial scandal surrounding TMI will be limited, it acts as a timely reminder of how vulnerable the supply and price of manganese metal remain to market and policy-driven shocks in China. With a major new end-use looming on the horizon, and a plethora of potential issues weighing down on the supply side, more turbulence is to be expected in this evolving market. This will have a major bearing on the key industrial sectors and manufacturers, including:

At CRU we make it our business to assess and identify exposures and opportunities arising from these eventualities, through our global and dedicated analyst teams and consultants. For a deeper discussion on how CRU can help you, contact one of our authors, regional leaders or CRU partners.