In the first edition of this annual Insight, CRU takes a step back and reviews the key changes and developments in the optical fibre and cable industry in 2018, highlighting the lows and highs, alongside key moments and advances in technology. Furthermore, we shine a spotlight on the key market moving topics and upcoming research areas CRU’s Wire and Cable Team will be focussing on in 2019.

Global growth stifled by China in 2018
2018 was a rocky year for the optical fibre and cable industry, one marked with numerous highs; such as surpassing the one billion level for fixed broadband subscribers, but also a year of lows; namely the first time in 16 years the Chinese market has contracted. Indeed, this downturn in China acted as a drag on global optical cable demand, which following a four-year period of double digit growth, slummed to just 4% y/y in 2018. Let’s take a look at some of the driving forces behind this slump and other key moments in the industry last year.

Selected highlights from the 2018 optical fibre and cable industry

Downgrades to China Mobile the driving force behind slower growth
As highlighted above, the predominant reason behind our downward revisions is weaker-than-expected orders from CM. After issuing a H1 tender of 110 million F-km of standard (loose-tube) optical cable, many market participants expected demand from the company to reach 200 million F-km in 2018.

However, CM’s actual monthly consumption throughout 2018 fell far short of the tender’s level. It is not yet clear whether CM has completed procurement of 110 M F-km under that tender. Late in 2018, some suppliers said the tender amount had been used up in Q4 2018, but one supplier said this month that CM was still placing orders under those contracts. Further, we understand that China Mobile has yet to announce its tender for 2019 and as such, we expect the numerous provincial operating companies to be utilising stock which was accumulated late in 2017 and throughout 2018.

CRU downgraded our view for CM installations at numerous points last year, which subsequently has stifled our estimate for global growth in 2018, which we now expect expanded by just 4%. Meanwhile, key markets such as western Europe, North America and India continued to grow strongly, spurred on by large-scale FTTx rollouts, although this was not enough to offset such declines in China. The chart below shows the significance of these downwards revisions on the global market. 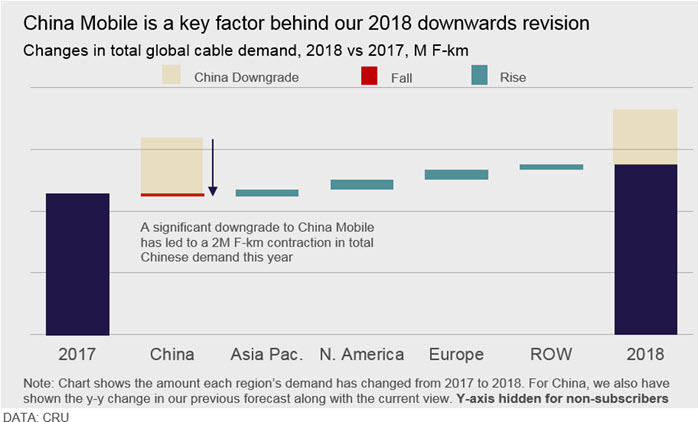 Outlook for 2019 dependent on China Mobile’s next tender and 5G deployment
As 2019 progresses, there will be more information about the amount of fibre installed in 5G infrastructure and other new local applications, especially as China ramps up 5G network testing. This should provide greater insight into the strength of the next generation of fibre deployment, “beyond FTTx”. Whilst it looks increasingly likely 2019 could be another lacklustre year, commercial 5G rollouts beginning in 2020 will provide an uptick in demand moving forwards. With this in mind, let’s take a look at some of the key market drivers and focus areas for CRU research in the coming year.

Examples of key topics we will be watching in 2019

CRU will be tracking developments in these key areas closely during the coming year, providing in depth commentary and analysis across both the Optical Fibre and Cable Monitor and the Telecom Cables Market Outlook.