Is solar power cheaper than coal?


It is increasingly stated that renewable power generation costs are now lower than costs of traditional fossil fuel generation; furthermore, that the continued renewable generation cost decline will result in ‘cheap’ electricity for all.

Solar power is becoming increasingly competitive with coal-fired power generation; however, our analysis suggests that financial assistance for solar projects is still required for low solar power price agreements to be viable.  The very serious negative externalities associated with coal-fired generation—climate change and air pollution—mean that such measures are absolutely warranted in order to encourage investment in renewables. In the absence of a comprehensive global policy agreement that accounts for these external costs, our analysis suggests that fossil fuel generation remains the cheaper form of electricity generation.

Historical cost comparisons
CRU has collected information on 34 commercial scale solar power plants that have been installed since 2010 in order to estimate the levelised-cost of electricity (LCOE).  LCOE can include a variety of assumptions, however, in order to compare the true, underlying cost of power generation (i.e. before government or policy intervention), the methodology we have adopted does not account for any form of financial penalty (e.g. in the case of a carbon charge) or assistance from subsidy or favourable financing.  We believe this approach provides a clearly defined framework on which the impact of policy decisions can be tested and a start point for any investment decision.

The sample contains a total of 7.8 GW of capacity and includes plants in the US (7), India (6), Europe (6), the Middle East and Africa (5), Australia (4), South America (3), North East Asia (2) and South East Asia (1).  Importantly, the sample does not include any Chinese solar plants.  In the coming months, we will be working on Chinese power generation costs as a whole and will provide this information to our subscribers when completed.

The critical pieces of information collected for each plant and used to estimate the levelised-cost of electricity (LCOE) are commissioning year, capital cost of installation, capacity, actual power generation (i.e. the efficiency of installed capacity), lifespan of the plant, degradation of the cells (i.e. the rate at which capacity declines over time) and operating and maintenance costs.  For a number of plants, actual power output has been reported and, in these instances, we have used this information in our calculation.  The tax rate selected is the typical, corporate tax rate in the relevant country.  Other variables relevant to our estimates are not typically reported, therefore, we have used the following set of standard assumptions where necessary:

We have also carried out similar research for coal-fired power plants that have been built in recent years.  The key assumptions that underpin our calculations of LCOE for these plants are as follows:

To re-iterate, we have not included financial assistance that reflects the fact that solar power is a merit good and, similarly, we have not included any form of additional costs in our calculations for coal plants to account for negative externalities, such as carbon taxes or the cost of collecting and sequestering carbon dioxide (CO2).  To illustrate, a coal-plant with a 39% efficiency emits ~0.9 tCO2/MWh and a CO2 price of $30 /t, for example, would add $27 /t to the levelised cost of coal generation.  This would approximately double the calculated LCOE, however, we have similarly not included battery storage costs for solar farms, which will be critical in order for large-scale plants to be accommodated in the grid and these could add 30-50% to installations costs of solar plants.  In this analysis, we solely aim to compare the underlying costs of both types of power supply in the absence of government or financial intervention.  The charts below plot the installation costs of solar and coal power plants and our estimates of the LCOE for each plant.

The charts above demonstrate a handful of important and interesting trends.  Firstly, it is abundantly clear that the cost reductions achieved in the solar industry since ~2010 are extremely strong; installation and levelised costs for plants built in the last year or so are ~70% lower than plants built in 2010.  However, costs of plants installed between 2015-2017 H1 have remained broadly stable and, so far, we have been unable to find a solar plant that has been built with a lower LCOE than a standard coal-fired plant under the aforementioned assumptions.

We are certain this finding will be questioned, however, the data for plants built in the last three years or so suggests that costs have not been falling so rapidly and none have been cheaper than coal plants.  That is, solar costs for plants already up-and-running appear to have plateaued and remain approximately twice as expensive as coal-fired plants under our assumptions.

Costs plummeting in the next wave of solar plants
Indeed, the common consensus is that solar power costs are continuing to fall very sharply and that solar is already more competitive than coal.  This view is driven by the very low power price agreements (PPAs) being signed by solar power developers in the last 18 months or so for plants that are, or will soon be, under construction.  For example, Avaada Power and Phelan Energy have signed PPAs at INR2.62 /kWh ($40 /MWh) for plants they are building in India and Solarpack Corporation and Jinko Solar/Marubeni have agreed to supply power at $29 /MWh from their plants in Chile and the UAE respectively. 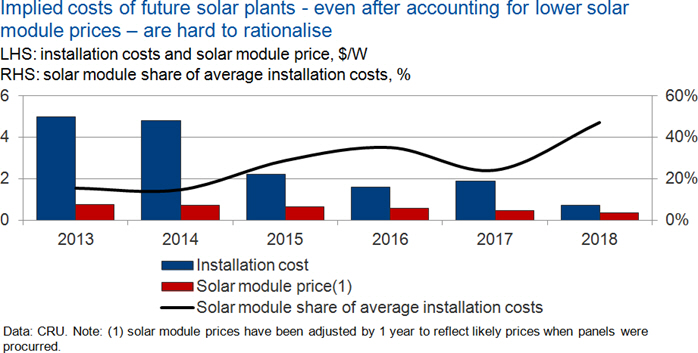 These recent PPAs strongly suggest that the costs of the plants being constructed today have dropped massively and we are witnessing a step-change in costs similar to that from ~2010-2015.  For example, PPAs of $29-50 /MWh for upcoming plants in India, Chile, the US or the UAE, under the standard assumptions previously listed (n.b. without subsidy, tax benefits, favourable financing, etc.) require installation costs of ~$0.50-0.80 /W (n.b. depending on capacity); a ~50-70% fall compared with the cost of plants installed in the last two years.  Needless to say, this is a phenomenally fast decline and is hard to envisage given the fact that solar module prices – while also much lower than in recent years – are currently $0.33 /W.  In recent years, solar module prices have accounted for ~25-35% of total installation costs and ‘other’ costs of installation have typically amounted to >$1.00 /W.  In the next wave of power plants, the implication is ‘other’ costs will fall to ~$0.17-0.47 /W.

Publically available cost estimates for these upcoming plants are difficult to find.  One exception is for Jinko Solar and Marubeni’s plant in Abu Dhabi.  It has been reported that the joint venture has raised $870 M in finance for the 1.17 GW plant.  This will be the largest solar plant outside China (n.b. and possibly the second largest plant in the world).  The implied installation cost of $0.74 /W, while significantly lower than the cost of plants built in the last few years, is still not low enough to warrant the reported PPA of $29 /MWh under un-subsidised conditions.  In the absence of some form of subsidy or financial assistance – or a technological jump in efficiency or lifespan of cells – we estimate the LCOE of this particular plant will be $41 /MWh.  Similarly, plants are being constructed in countries such as Mexico, Philippines and Vietnam with capital expenditure budgets that imply the LCOE will be $45-55 /MWh.

It is possible that some of these budgets will not be kept to and/or plants encounter unanticipated problems in the years ahead; this is a common occurrence in a wide range of capital-intensive industries.  Having said that, the $45-55 /MWh cost level is competitive with – but not necessarily lower than – coal-fired power plants.  Under legislative environments where the negative externalities associated with a coal-fired power plant are not accounted for (n.b. we are not suggesting this would be a positive situation), a coal-fired power plant remains a far less risky investment than a solar power plant.  For example, while the efficiency of solar plants is undoubtedly improving, there is less certainty regarding actual output compared with a coal plant where the technology and process is established and well understood.  Furthermore. we have assumed that future solar plants will operate at 30% utilisation; this level is at the top end of the range of utilisations of recent plants in ‘sun-belt’ countries and lower, actual results would result in higher LCOEs and lower returns on investment.  As such, in those countries that are seeking to electrify and bring benefits to their population, coal-fired generation will likely remain the dominant form of power generation chosen to underpin expansion.

Nonetheless, the reality is the negative externalities associated with burning coal are starting to be passed on to power producers and the prospect of carbon charges of, potentially, ~$20-30 /MWh, or higher even, in the future makes an investment in a coal plant less attractive.  Meanwhile, solar power developers have gained, and in some countries continue to do so, from a combination of tax benefits, cheap financing and subsidy and this, as well as the strong cost reductions being achieved, is driving strong growth in the sector.  These benefits – while justified and largely supported by the public in many countries – do come at a financial cost to governments and, ultimately, consumers.  However, our research suggests that solar power costs are falling towards a level where the industry can compete with coal plants on a like-for-like basis in some circumstances and, for this reason, subsidies in certain countries are being reduced.

Conclusion
PPAs of <$30 /MWh have spurred numerous comments that solar power is now cheaper than fossil fuel generation.  The cost reductions and technological progress required for these plants to provide power at these tariffs – under normal financing terms and tax payments etc. – appear optimistic.  Nonetheless, we believe that levelised costs of solar generation will fall to $45-55 /MWh in the coming years, without subsidy, in countries with abundant sunshine and land and this level is one that is competitive with coal-fired power generation; this is a massive achievement considering that costs were approximately four times higher just two years ago.  However, this does not imply a step change in the costs of total power generation and we do not believe that the world is at the dawn of an era of low-priced electricity.  In addition, it should be noted that in regions with less sunlight (e.g. Northern Europe and Northeast Asia), we estimate the cost of solar power remains, for now, twice as high as coal-fired generation in the absence of all forms of policy intervention.

Although we have seen significant reductions in solar costs, this is certainly not to say that coal-fired power generation will be phased out completely in the medium- or, even, the long-term in sunny regions.  The intermittency of solar power remains a major issue and, while battery technology is an area garnering huge interest and research, battery storage today increases the cost of solar projects by as much ~30-50%.  As a result, fossil fuel generation will continue to play a key role in providing baseload and flexible power to the grids of many countries.

See all our coal team