A ‘trade spat’ could shave a percent off global growth 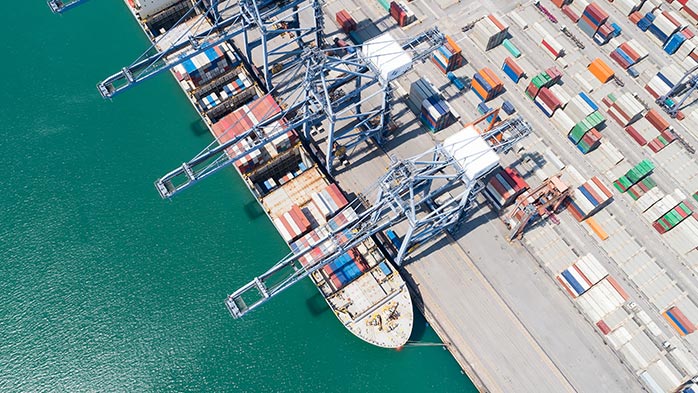 Trade news has been both good and bad in recent months, creating increased uncertainty about where global trade policy is heading. Here we show that if the threatened US tariffs go ahead and dent global confidence, a scenario we call a “trade spat”, could shave around a percent off global GDP.


The effect could be two to three times larger if we assume full retaliation and a bigger confidence crisis. To assess the risks of a trade spat we will be monitoring how economies adjust to the new tariffs, how policies respond to emerging pain points and the geopolitical landscape.

We do not have much “hard” data to point to, but reliable “soft” business indicators are now flashing amber. Overall, the optimism that drove strong growth in 2017 appears to be fading, with trade tensions certainly a contributing factor. Leading us to ask whether global growth will come of its peak fast or slow?

Base case: global growth slows gradually
CRU’s view is that global growth slows from 3.1% in 2018 to 2.9% in 2019 and 2.8% in 2020. The narrative that supports this includes: China slows as a result of its ongoing effort to tackle debt and rein in credit growth; the US slows as this year fiscal stimulus abates and the Fed continues raising interest rate; and that the EU slows as the economy cools to its trend growth. Our base case includes the tariffs already implemented - the aluminium and steel tariffs, the first round of US tariffs on China, and the retaliation by China. But the impact of these tariffs is small, less than 0.1% of world GDP. While our base case assumes that trade tensions continue, significant escalation of tensions, remains a downside risk to our forecast.

Trade spat scenarios: global growth slows faster
A trade spat could push the global economy to slow down by more than we expect in the base case. In this section we consider four scenarios, each will illustrate its impact on the pace of growth slowdown.

The impact of tariffs will depend on the market under consideration, and where a business is in its value chain. Rising tariffs can have large impact on local markets. For example, US tariffs have pushed up the price of aluminium and steel in North America. But tariffs can have a different impact at the level of the US economy – total output can fall, lowering overall consumer prices. This can arise as foreign exporters pass on the tariff rises to US consumers, through higher prices. If consumers continue to buy these (more expensive) goods, they will have less income to spend on other goods and services. This reduces overall consumption and output, pushing down on aggregate prices. Below we describe how the different scenarios affects the macro economy

Scenario 1 builds on the base case by adding in President Trump’s threat of a 10% levy on $200 billion in Chinese imports which could potentially come into effect during Q4 2018. The charts show that this scenario slows growth in China and the US, along with global growth, highlighting that everyone loses from increased protectionism.

Scenario 2 builds on scenario 1. It adds in the potential effects of tariffs on imported cars, vans and trucks, as well as car parts to rise to 25%. Given that the Section 232 investigation on cars is due to conclude in February, we assume this tariff takes effect in Q1 2019. We expect it to significantly affect the top four exporters to the US - Mexico, Canada, South Korea and Japan, as the EU is for now exempt. We assume that countries that lose US export market share can divert a share of those goods to other countries.

Scenario 3 builds on scenario 4 by adding in the risk that President Trump places tariffs on the full $505 billion of Chinese goods imported in 2017. We assume this will take effect in Q1 2019. These tariffs work through the same channels as in scenario 2, but the impacts are large mainly because the shock is now bigger.

Scenario 4 is the largest concern – trade tensions dent confidence
Scenario 4 captures protectionist measures that ratchet up and dent confidence. This is observed through a drop in global confidence, which lowers global equity markets by ~ 10%, global consumption by ~0.5% and global investment by ~1.5%. This takes 0.8 % off the level of global GDP: a sizeable decline.

We describe scenario 4 as a trade spat rather than a trade war for three reasons. First, the fall in confidence during the Global Financial Crisis was about 5 times larger, suggesting a larger shake-up in confidence is feasible. Second, this scenario does not assume full retaliation, instead it captures the current ‘softer’ geopolitical mood. For example, The EU has recently gained an exemption from the car tariffs, in exchange for increasing EU imports of soybean and natural gas from the US. Finally, these numbers assume some automatic policy easing. A scenario with less reactive policy, greater retaliation and a more severe confidence crisis would make the hit to global growth two to three times larger.

US takes bigger hit to GDP, but China matters more for commodities
In all four scenarios, the US faces greater pain - loss of GDP – than China. In scenario 4, the level of US GDP falls by 1.5% by 2020, in China it falls by 1.0%. The larger US impact is partly a result of China’s monopoly power in US markets. Over time, this competitive edge could fall. In China, GDP also falls by less because we assume China does not fully retaliate (if it did, it too would face higher import prices, inflation and lower demand).

It is well known that China is a crucial player in global commodity markets, accounting for on average 50% of global consumption. But less well known is that the US’s presence is small - under 10%. Indeed, as a rough rule of thumb a 1% fall in Chinese GDP reduces Chinese steel demand by 1%, while a 1% fall in US GDP reduces US steel demand by only 0.6%. This explains why small risks to China’s growth outlook in recent weeks, has had large repercussions on commodity markets. We expect China related jitters to continue. 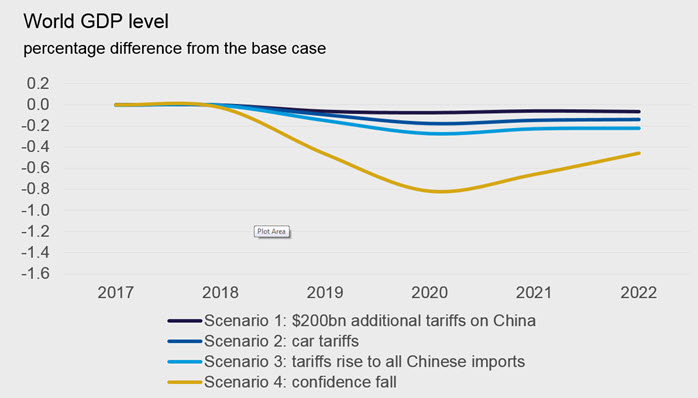 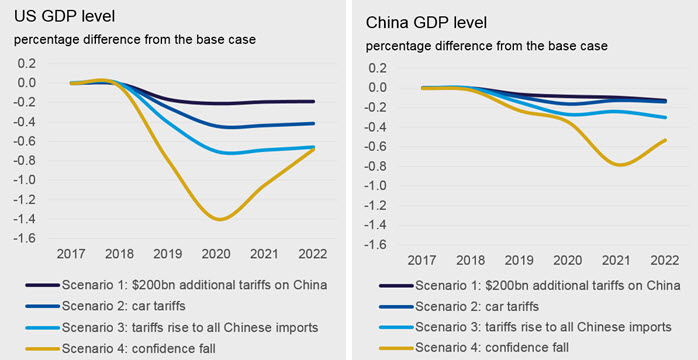 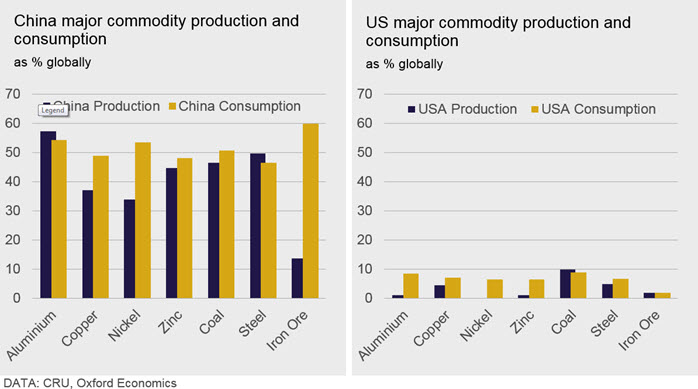 As markets adjust, some sectors will inevitably feel the pain of contraction. Domestic policy is likely to try and ease that adjustment. For example, President Trump did just so in announcing $12bn of subsidies for the US farmers hurt by the China soybean tariff. Similarly, Chinese authorities have eased monetary and fiscal policy on the margin. If trade tensions escalate, we expect China to undertake substantial easing. But policy has its limits and trade-offs: greater stimulus risks reversing its recent efforts to lower corporate debt and reign in financial risk.

The trade landscape is shifting rapidly. We do not expect “business as usual”. Instead businesses, consumers and authorities will all be learning about their markets, and reoptimising their choices along the way. The road ahead could be winding and long.