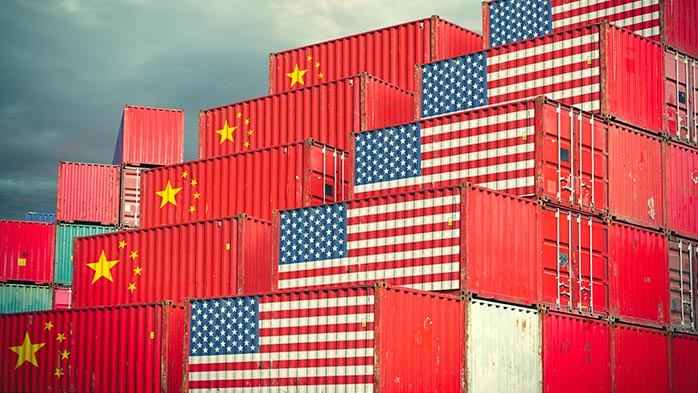 The meeting between Xi and Trump on 1st December turned out to be better than expected. According to the White House press release and Chinese official reports, tariffs will not rise from their current levels over the next 90 days.


Both sides agreed to enter immediate negotiations on ‘structural issues’– in other words trade practices. We interpret this as a ceasefire between Trump and Xi, which in our view has the potential to pave the way for a more optimistic trade agreement between the US and China.

Tariffs on hold at 10%
President Trump has agreed not to escalate tariffs further. This means not raising the tariffs on $200 billion of Chinese exports from 10% to 25% on 1st January, as originally scheduled. In return, China agreed to make “very substantial” purchases of US goods, including agriculture (most likely including soybeans) and energy. The US said there would be talks on structural reform covering five areas – forced technology transfer, intellectual property (IP) protection, non-tariff barriers, cyber intrusions and cyber theft, services and agriculture – are set to start immediately. If there is no progress after 90 days, the US will implement the planned tariff hike.

The table below compares interpretation of the press releases in the two countries. 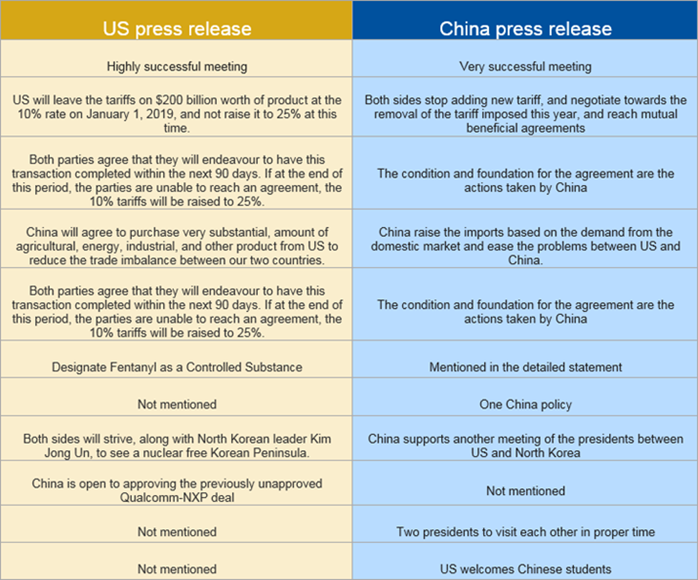 We expect more market opening by China
Chinese policymakers now face the difficult task of ironing out a deal that is acceptable to the Chinese people but also involves significant enough concessions not to be toppled by the China hawks in the Trump administration.

In our view, China is very likely to increase imports of US products and services to help reduce bilateral trade deficit. China is also likely to agree to speed up market opening in several industries, in a hope that this will help address US concerns on technology transfer and IP protection. Indeed, domestic support for further market opening and better IP protection has increased in China in recent months. China already announced that it would enhance IP court system and introduce punitive damage on IP violations. Regulation on foreign investment in China in some specific industries such as automotive also seemed to be more relaxed.

A temporary ceasefire paves the way for greater optimism
We foresee that it will be incredibly challenging to reach an agreement on such complicated structural issues within a three-month time frame. Though the two camps agreed on the temporary truce, tariff sanctions have not been lifted, suggesting that the trade war is still on. China's offers on IP protection may not be enough for the Trump administration. More importantly, Beijing's Made in China 2025 high-tech manufacturing initiative and industrial subsidy practices remains an “off-limit” discussion.

Despite these difficulties, the most positive takeaway from the Xi-Trump meeting is that both leaders seem to want a trade agreement. We think it is too soon to expect the meeting marks the end of the trade dispute. After all, China thought it had a deal with US Commerce Secretary Wilbur Ross back in May, only to have it broken within weeks. That said, the recent meeting does pave the way for greater optimism for the future.