China reduces NPK tariffs, but will they export? 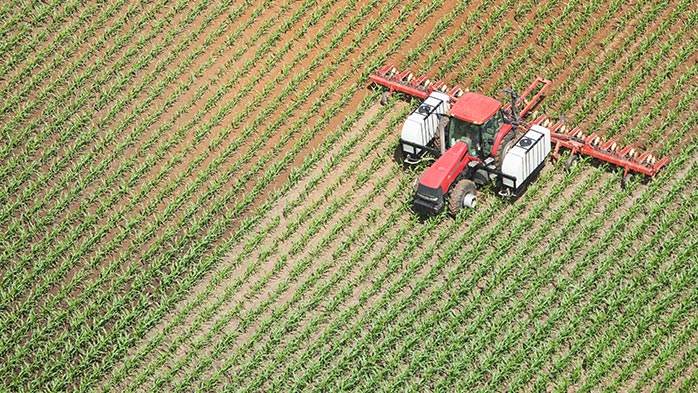 China's Ministry of Finance announced export taxes for 2018 on December 15, imposing a new reduced rate on NPK exports from January 1, 2018. This will reduce costs for Chinese producers to enter the export market. Will these announced changes have an impact on future Chinese NPK exports?


China currently imposes an export tariff on NPK compound fertilizers, but this has steadily reduced over recent years following lobbying from Chinese NPK producers. The tax reduction will cut costs for producers to enter the export market. China has significant overcapacity in the NPK sector and a removal of export taxes could release some of this volume onto the international market, subsequently lowering international prices. This insight takes a closer look at the factors which will influence future NPK exports.

Tracking China’s fertilizer export tariffs
Chinese export tariffs on urea and ammonia were removed completely by 2017, along with tariffs for DAP, MAP, and TSP. Meanwhile, tariffs for phosphate rock and NPK were cut to 15% and 20%, respectively. China's Ministry of Finance announced export taxes for 2018 on December 15. Export tariffs on urea and DAP remained unchanged at 0% and further reductions were made on phosphate rock and NPK. These rates are effective from January 1, 2018. The new NPK rate of RMB100 /t ($15 /t) equates to roughly a 5% export tariff rate using current prices. This is a significant drop compared to the 2017 rate of 20%, equivalent to $60 /t at current prices to export to South-East Asia. 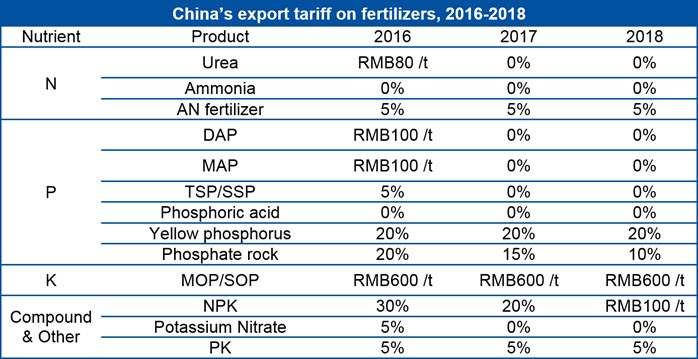 Source: Ministry of Finance of the People’s Republic of China.

China produces mostly steam granulated NPK, not suited for export markets
The Chinese NPK supply structure has undergone significant changes since 2000. In the early 2000’s, the Chinese NPK industry was almost exclusively supplied by steam granulated products. SSP was used as the primary source of P content with the addition of urea, ammonium chloride, ammonium sulphate and MOP. The use of SSP resulted in a low-quality product and an inherently low P2O5 concentration (~8%) and total NPK nutrient level (~27%).The industry was composed of small (<0.1 Mt /y) operations which were not integrated with raw material supply. 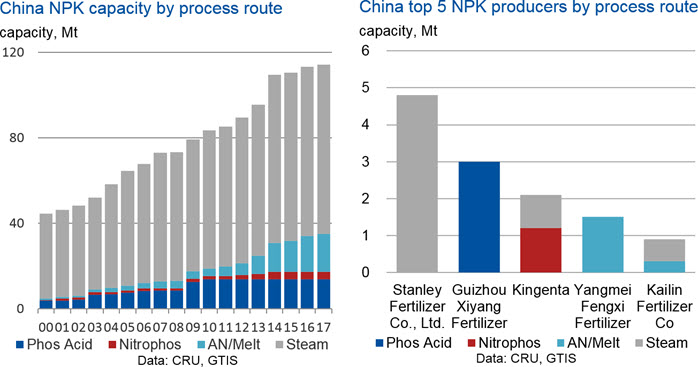 Today, Chinese capacity is still dominated by steam granulation, however the use of SSP in NPK had become less common with powdered MAP now the major source of P, increasing the total P2O5 and total NPK nutrient content. Another major supply shift during this period was the incorporation of ammonium nitrate (AN) into NPK production, triggered by restrictions on direct sales of AN in 2002. AN produces a NPK granule with a portion of the N in nitrate form, an agronomic feature demanded by Chinese growers. However, because it is produced via a physical production process, it still produces a granule with poor handling attributes. China also has chemical-based capacity, more suited to export markets. In 2017, phosphoric acid based capacity totalled 15.0 Mt with nitrophosphate capacity totalling 3.6 Mt; however, production levels have never exceeded 7 Mt for phosphoric acid based NPK and 1 Mt for nitrophosphate-based product.

China has overcapacity in the wrong types of capacity. European producers supply chemically produced NPKs to Chinese growers who value the quality aspects of the product. Indeed, the demand for imported products is based on quality and the form on N in the granule and consumers are not expected to change preference over the medium term. Chinese NPK imports have steadily reduced since the early 2000’s and have remained flat since 2008. In 2017, China imported 1 Mt of NPK, a large volume compared to total global trade, but only 2% of total Chinese NPK demand. China mostly produces medium to low grades via physical process routes which has relatively low global demand.

The structure of the top 5 NPK producers reflects the diversity of the NPK supply and who might increase exports when tariffs are reduced. Stanley Fertilizer is the largest producer by capacity, spread across 7 large scale plants ranging from 0.6-0.8 Mt. However, all production is via steam granulation, so future NPK export prospects by this producer is unlikely. Chemical-based plants such as Guizhou Xiyang Fertilizer and Kingenta produce NPKs more suited for the export market. 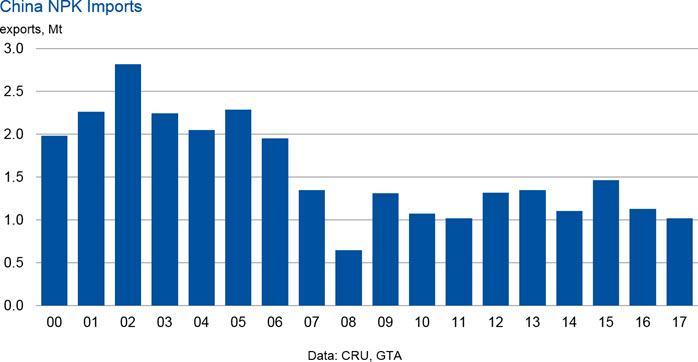 Potential exporters would face tough competition in the global market
China currently export very small volumes of NPK. In 2017, China exported less than 0.1 Mt, shipped to markets such as Cuba, Laos, Myanmar, and Japan; relatively small or stagnant markets. Conversely, South-East Asia represents one of the world’s fastest growing markets for NPK and represents a potential export market for China. The vicinity of this market favours competitive freight costs, but also strong demand growth is forecast over the medium term. However, there are barriers to increased Chinese exports. There is currently very strong competition in the South-East Asia market with market share for imports dominated by Europe, particularly Yara and Russian exporters. There are also increases in local capacity forecasted, which will add further supply pressure. Further, South-East Asian buyers have a strong preference for nitrophosphate-based NPKs and are staunchly brand loyal, meaning Chinese exporters would have to satisfy quality and chemical characteristics whilst maintaining a competitive price.

Environmental regulations in China will expedite NPK plant closures, lower operating rates and cause a tightening demand/supply balance
There is a risk of capacity closure of NPK facilities near to the Yangtze River following recent environmental inspections. From January 2016 through September 2017, the Chinese central government has implemented 4 rounds of environmental inspections. The wide coverage and strict measures taken during these inspections has instigated broader concerns in the fertilizer industry. Some fertilizer plants were found to be violating environmental requirements and were forced to shut down unless improvements to environmental protection were implemented and fulfilled. These environmental regulations are likely to result in more seasonality in production levels, with lower autumn/winter production. It will also tighten the supply-demand balance in China as some NPK plants will be forced to close. The reduction in local supply will see any increases in local production serve domestic demand, rather than be destined for export.

Conclusion
Cuts to Chinese export tariffs for NPK fertilizers have reduced the costs for NPK producers attempting to enter the export market. The most likely target market for Chinese producers is the South-East Asia, however, China has overcapacity in the wrong types of capacity compared to its established competitors. While China has surplus nitrophosphate capacity, it is unable to consistently produce products with comparable quality to imports. A more likely outcome could be a reduction in Chinese NPK import demand.