European fertilizer producers are paying close attention as the European Union mulls whether to abolish anti-dumping duties on Russian ammonium nitrate (AN).


The European Commission launched two separate interim reviews on existing AN duties on imports from Russia on August 17, 2017. One – numbered R669 – was requested by Russian AN producer Acron and the other – R674 – came following an application from eight farmers’ associations in the EU.

The outcome of the reviews – which is due to be reached by 16 August 2018 – may have a significant impact on AN producers and farmers in the EU. If the tariffs are abolished, European AN producers will have to contend with cheaper Russian imports into the bloc, while conversely farmers could benefit from lower prices.

AN imports from Russia are subject to anti-dumping duties ranging from €23.88/mt to €47.07/mt, according to a document published on the European Commission’s trade defence website in August last year.

Background
The first definitive AN anti-dumping measures were imposed in August 1995, following an investigation launched by the Commission in 1994.

Following the subsequent expiry and partial interim reviews of these measures, a definitive anti-dumping duty was maintained on AN imports from Russia in April 2002.

In July 2008, the definitive anti-dumping duty was once again maintained. Still, at this time the Commission accepted a price undertaking offered by Acron. Price undertakings are alternatives to anti-dumping duties, where the exporter raises the export price to a point that satisfies the Commission that the injurious effects of the dumping are mitigated.

The farmers’ case
Farmers’ associations in the EU have pointed to a range of shifting economic conditions in their case that AN anti-dumping duties should be scrapped.

In a summary document of their interim review request, the associations said the EU AN market was dysfunctional and did not obey the normal laws of supply and demand, allowing manufacturers to achieve “unusually high profit levels”.

“The imposition of anti-dumping duties and customs tariffs over an unusually long time span has eliminated any meaningful competition thus enabling EU producers to pass through unwanted price increases which do not reflect the evolution of material costs such as natural gas,” the August 17 Commission document said.

European agri-cooperative Copa-Cogeca echoed these concerns, suggesting that the anti-dumping duties were boosting EU fertilizer producers’ profits at the expense of EU farmers.

AN in the EU no longer trades at parity with urea and this makes AN over-priced in the EU, she added.

“This unfair behaviour by the EU fertilizer producers is extortionate,” Dejonckheere said.

Between 2013 and 2017, AN commanded a 31% premium over urea in Europe on a nitrogen tonne basis, and only a 7% premium in the Baltic, according to Fertilizer Week data.

The FOB Baltic Sea spot AN price is not subject to EU duties, suggesting that the measures may have inflated the European AN premium over urea. 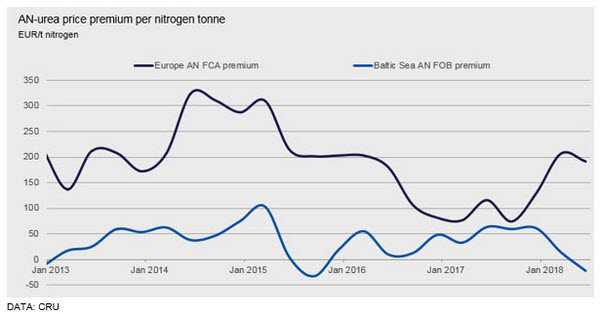 While Copa-Cogeca is not among the farmers’ associations that requested an interim review on AN anti-dumping duties, Dejonckheere said that the company had conducted oral hearings with The Directorate-General for Trade DG Trade during the investigation period.

Acron’s case
In its application document for a partial interim review, Acron pointed to “substantial changes in the structure of sales” from the company to the EU since the withdrawal of Acron’s price undertaking in March 2016 as a reason for anti-dumping duties to be removed.

Additionally, Acron cited the alignment of prices charged by Gazprom for natural gas sold for export to the EU and industrial consumers in Russia.

Still, Russia’s domestic regulated gas price will do no more than keep pace with inflation in the coming years, as the government continues to keep the price low to benefit the economy, according to Dr James Henderson, director of the natural-gas programme at the Oxford Institute for Energy Studies.

During a period of ruble strength in 2016, the netback gas price to Russia from Europe was almost equivalent to the European price, Henderson said. Since that time European spot prices have risen to levels significantly above the Russian domestic gas price, even on a netback basis allowing for transport costs and the gas export tax, he said.

“The structural issue of the Russian government regulating prices means that these convergences will likely be short-lived, with currency fluctuations playing a major role,” Henderson said.

Acron said in a May 11 investor report this year that Russian price rises in natural monopoly ruble tariffs such as gas and electricity will be limited by the rate of inflation.

“Vertical integration in nitrogen and phosphates, and capped gas prices in Russia, help Acron keep costs under control,” Acron said in the report.

“The playing field is not level when you are competing with distorted gas prices in Russia, and gas prices represent between 60-80% of production costs,” Director General at Fertilizers Europe Jacob Hansen said in a March 2018 press statement in response to calls for fertilizer tariffs to be scrapped.

Russia and the Gulf States would be the main beneficiaries of a removal of fertilizer tariffs, Hansen added.

As much as 50% of all nitrogen imports into the EU are tariff free, including from areas such as North Africa where the EU is eager to promote trade, Fertilizers Europe said.

Borealis said the anti-dumping tariffs on AN from Russia were imposed by the EU after careful investigation.

Aside from distorting markets, dumping has indirect negative effects on European fertilizer producers. Stringent EU legislative and regulatory requirements are imposed on EU producers, but these do not apply in Russia.

The EU said that the investigation for both interim reviews on AN anti-dumping duties will cover the period from July 1, 2016 to June 30, 2017. This will include an examination of trends relevant for the assessment of injury from January 1, 2014 to June 30, 2017.

With an outcome due to be reached before the end of August, Brussels will be in sharp focus in the weeks ahead.