How the Inner Mongolian zinc mining market will change 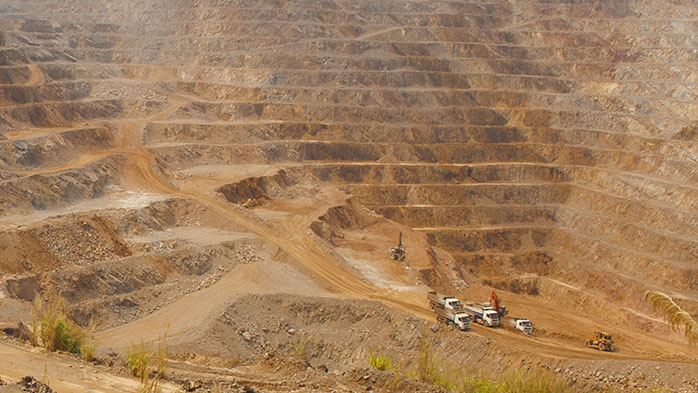 With many new projects and expansions anticipated over the forecast period, zinc mining capacity in Inner Mongolia is expected to continue to increase by 11% (124 kt/y) to 1,246 kt by 2022.


Despite being the largest zinc mining province in China, this rate of growth is considerably lower than we expected previously. In this insight, we explore further industry changes over the forecast period taking into account smelting capacity growth which is set to outpace that of mine supply growth. 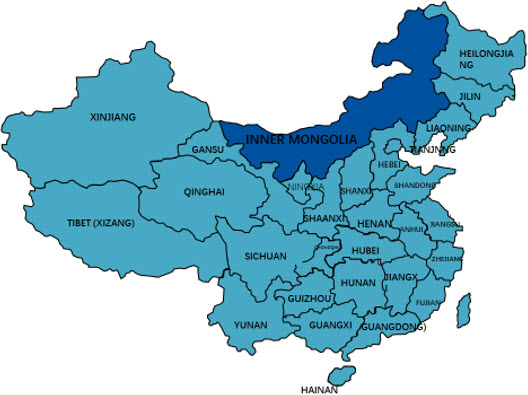 Key features of the Inner Mongolian zinc mining market
The Chinese Mineral Resources annual report suggests that China’s total zinc Reserves were 149.85 Mt in 2015, with 28.33 Mt (18.9%) located within Inner Mongolia. Exploration in Inner Mongolia only took off strongly after 2000, much later than Hunan, Yunnan, Shaanxi and Gansu. Most of the zinc deposits are in Chifeng, Bayannaoer, Hulunbeier and Xilinguolemeng. 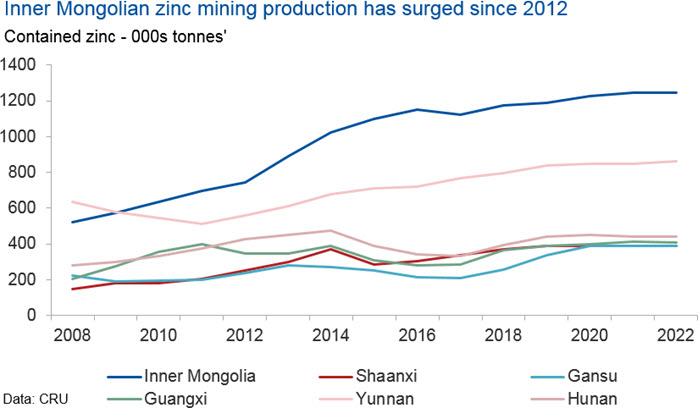 With large investment coming into the Inner Mongolian market in recent years, local zinc mining production has grown at 8.0% p.a. over the past ten years. The output accounted for 28% of the total production in China in 2017, up from 18% in 2008. Today, there are at least 66 lead-zinc mining operations in Inner Mongolia. Ten deposits are large, 13 deposits are middle-sized and over around 40 the lead-zinc deposits are small scale. There is already a high degree of production concentration, with 27 mines producing more than 10,000 t/y and contributing 745,000 tonnes in total (66% of the province total) in 2017. In 2018, we expect that 32 mines’ output will reach over 10,000 t/y, contributing 845,000 tonnes in total (72% of the province total).

There are several advantages for developers within or looking to enter the Inner Mongolian zinc mining market.

Around half of Chinese listed zinc mining companies have zinc mines in Inner Mongolia, including Zijin, Shengda, Shengtun, Jianxin, Xingye, NFC, Shandong Gold, Yintai, West Mining and Chihong. With strong financial support, most local major zinc mines have more advanced facilities and management and already satisfy the required levels of environmental and production safety standards, such that the environmental inspections in 2017 had limited impact on production. 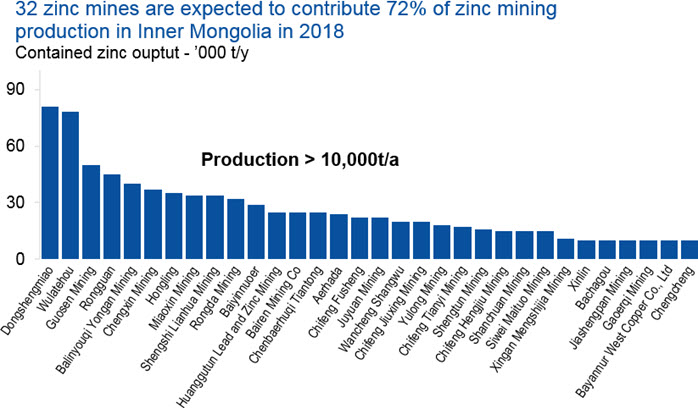 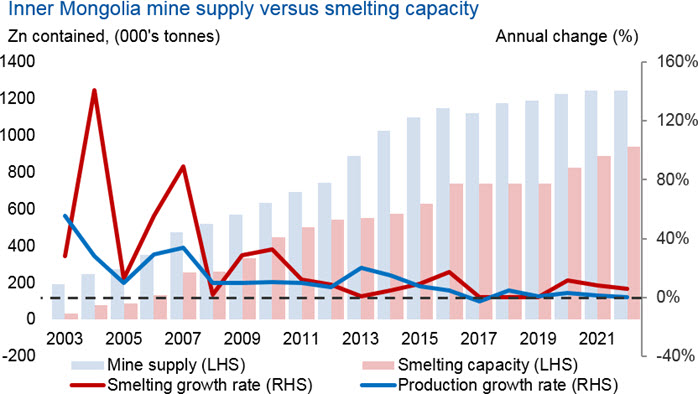 We expect that the excess supply of zinc in concentrate will drive increased zinc smelting capacity growth in Inner Mongolia.

New limits on zinc/lead mining and smelting
The Inner Mongolian government recently released a report highlighting the negative impact of several industries in 43 ecological zones, encompassing forests, grasslands and desert, and covering around 80% of the total area of the province. Among the 43 key ecological zones, new zinc/lead mining projects have been banned in eight areas and new smelting or expansion projects have been banned in 11 areas. In addition, the minimum capacity of any new projects in 13 of the areas has been set at 2,000 t/d throughput and 30,000 t/y production.

We understand that the new policy will have limited impact on the zinc mining and smelting capacity in Inner Mongolia in the coming five years as there are relatively few zinc deposits in the banned areas. A more likely outcome is therefore that the policy will result in production concentrating further in certain areas in the future. Furthermore, the new policy will not apply to those projects which have already obtained exploration rights, or projects that have received EIA approval but have not started construction. One such example is Xing’an Copper & Zinc in Xiwuzhumuqinqi, where we don’t expect the new policy will impact its expansion project. 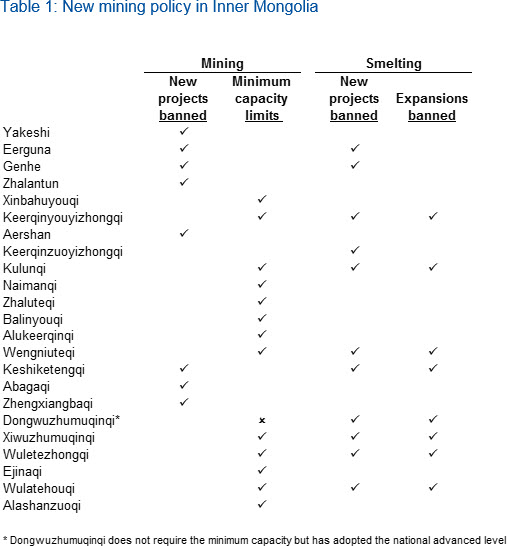