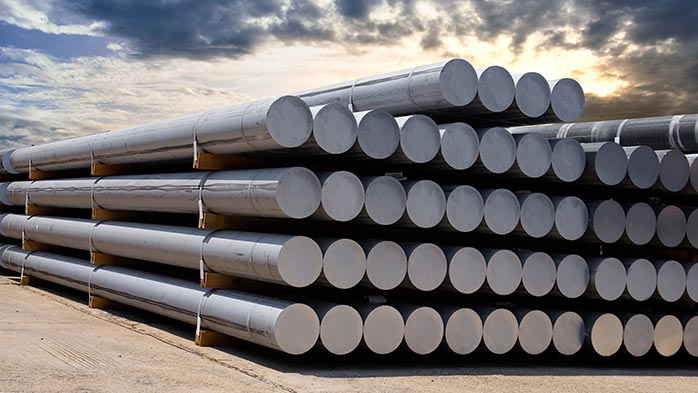 Sanctions and higher tariffs will increase costs for EU aluminium semis producers and consumers and the main winners will be Chinese producers of primary and semis.


Increasing tariffs and US sanctions dominate the current market sentiment in the aluminium sector. This insight examines the impact of US sanctions specifically against material originating from UC Rusal, and potential safeguard tariffs which could be imposed by the EU if aluminium displaced by US safeguard tariffs is diverted into EU affecting local producers.  We consider the knock-on effect on the EU downstream aluminium sector and the cost and sources of alternate aluminium materials for EU consumers.  In addition to the potential increase in costs that will need to be absorbed by the value chain, we comment on an increased carbon footprint for aluminium in Europe and possible disruption to industrial production as new suppliers need to be qualified.  We conclude that the EU aluminium sector would become increasingly reliant on imports of primary aluminium from China. 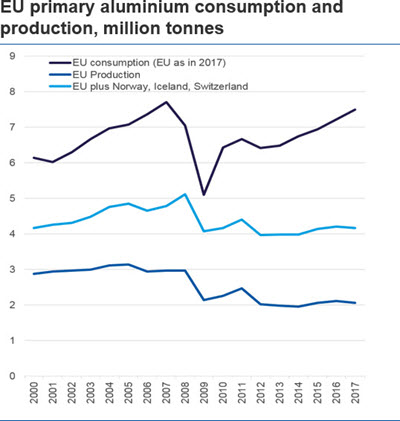 Tariffs and sanctions will raise costs for EU semis producers and EU consumers
The EU has a growing need for primary aluminium imports, as regional semis production has grown, while primary aluminium production has fallen over the past decade due to the smelter closures. The EU’s import need is over 5 million tonnes a year, and over 3 million from outside the EU/EFTA area.

Russia is both the largest and lowest cost supplier of primary aluminium to the EU market. Between 2012 and 2017, Russia’s exports of aluminium to EU28 countries increased from 0.6Mt to nearly 1.4Mt; of the remaining suppliers, only U.A.E. (+180kt) and India (+200kt) have shown substantial growth. Norway and Iceland remained dominant suppliers to the EU, although their market shares fell slightly.

Lower power, labour and carbon anode costs are key differentiators of Russia’s cost position in primary aluminium. Average site costs in Russia are estimated by CRU at $1,620/t compared to an average of $1,802/t among the next nine largest suppliers to the EU.

As such, any volumes potentially coming to Europe in replacement of imports from Russia will most likely come from higher cost suppliers. Although all aluminium is priced on an LME basis, the need to replace volumes from Russia will tighten the market, leading to higher prices and thus higher costs for semi manufacturers and consumers.

The loss of primary aluminium volumes caused by continued US sanctions cannot be replaced in the short/medium term, except by Chinese exports, thus increasing the carbon footprint in the industry.
Among major aluminium suppliers to the EU, Russia has a relatively small carbon footprint due to its heavy use of hydroelectric power. We estimate Russian emissions at 4.2t CO2/t Al. This is higher than that of Iceland and Norway, but well below the estimated 17.2 CO2/t Al in India. Considering the sanctions limiting the volume of Russian exports to the EU and other measures resulting in export flows diverted from US into the EU, EU semis producers will face the choice of consuming primary aluminium from higher CO2 emitting countries.

Even without taking into account the complete cessation of Russian export volumes into EU and the global market, a lack of sufficient investment in new smelter capacity over the past several years has caused a tight market. The world, excluding China, will continue to have an aluminium deficit, requiring further inventory drawdowns, smelter restarts and increasing imports from China where surplus capacity remains. Chinese carbon emissions average 15.4t CO2/t Al. CO2 so are comparatively high and on a level with Indian smelters, as both countries rely largely on electricity sourced from coal. 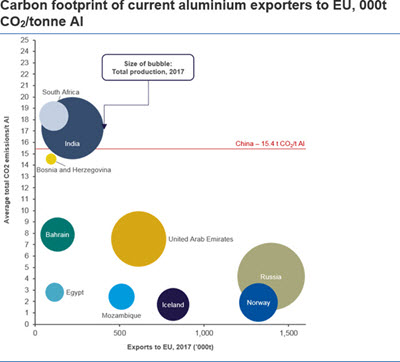 Just the fact of having excess primary capacity available in China does not imply the capability to quickly replace existing imports of products like slab or other value added products (VAPs), with high quality or meeting precise customer specifications requirements. This need to qualify and process new materials has further potential to disrupt the smooth operation of the aluminium value chain in Europe.

Continuing sanctions against the owner of UC Rusal would also have a major impact on the market for alumina. The alumina market has already experienced very high prices in 2018 because of the idling for environmental reasons of 50% of capacity at Alunorte in Brazil – the Western world’s largest refinery - as well as other supply threats. Rusal owns the largest refinery in Europe at Aughinish in Ireland, which delivers alumina to several European smelters. If sanctions prevent the delivery of alumina from Aughinish, then alumina prices would spike to very high levels and shortages could occur. If there is a delay in gaining governmental permission to resume full production at Alunorte, this could be a perfect storm for the alumina market.

In conclusion, the consequence of the possible safeguard tariffs and continued US sanctions will be that the EU aluminium sector will be forced to source materials from further afield, with the most likely source of these additional volumes being China. This change will increase the carbon footprint of production and potentially add to production disruption as new, more distant suppliers are qualified and adopted.