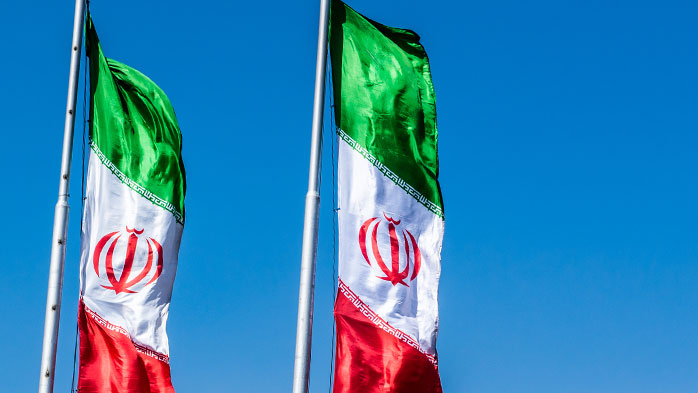 On May 8th, 2018, the USA announced its withdrawal from the 2015 Joint Comprehensive Plan of Action (JCPOA, better known as Iran Deal).


This deal, meant to ease economic sanctions on Iran in exchange for restrictions and monitoring of the country’s nuclear programme, was entered between P5+1 nations (China, France, Germany, Russia, the United Kingdom and the USA), the European Union and Iran.  Withdrawal of the USA from this deal means that they will re-impose secondary sanctions on Iran in a phased manner starting August 6th, 2018, thereby exposing any businesses with an American affiliation or ownership interest undertaking a deal with Iran to enforcement actions.  More importantly, these sanctions will restrict access of Iranian businesses (or people dealing with Iran) to the US financial system.

Re-imposition of economic sanctions by the USA are likely to have major repercussions on the country’s steel industry.  In particular, it will impact on Iran’s booming international steel trade, even though there are certain trade arrangements in place without US links.  In this insight, CRU assesses the potential impact of this development on Iranian steel trade and the country’s ongoing steel capacity expansion plan (which aims to increase the country’s crude steel capacity to 55 Mt/ y from current capacity of 32 Mt /y).

Iranian steel industry performance – post the Iran Deal
As soon as the historic Iran Deal was struck between world powers and Iran, the country pushed forward with a Comprehensive Steel Plan; which aimed at increasing the country’s crude steel production capacity to 55 Mt by 2025.  Investments in this plan were spearheaded by state-owned steelmaker Mobarakeh Steel Company (MSC) and Iranian Mines & Mining Industries Development & Renovation Organisation (IMIDRO).  Both these organisations formed joint partnerships with various public/private sector players to invest in the steel value chain, ranging from DRI production to downstream steel products.

Lifting of restrictive sanctions from Q4 2015 opened a variety of avenues for Iranian businesses, most of whom started off by swiftly building relationships, primarily with European businesses.  Iranian Automakers, led by Iran Khodro (IKCO), entered into a strategic contract partnership with European carmakers to manufacture and sell in the Middle East market.  This, eventually, increased demand for finished steel sheet products in the Iranian market which was catered to, especially by the state-owned MSC which expanded output accordingly.

Meanwhile, the Chinese retrenchment from international merchant semi-finished steel markets from 2016 onwards increased the prices of semis in the Asian export market, thereby making it a lucrative target for Iranian steelmakers.  Iranian semis exports to countries such as UAE, Thailand, Oman, Indonesia, Taiwan and Egypt therefore grew many fold in 2016 and 2017 (see chart).  Such was the growth in export market sales that MSC set up a 1.5 Mt/y export-oriented slab production unit by the name of Hormozgan Steel Company.  Meanwhile, the country’s oldest (and the only blast furnace-based) steelmaker, Esfahan Steel, was able to operate at over 70% capacity utilisation as its exports became economically viable.  The largest gainer in the export market has, nevertheless, been Khouzestan Steel Company, a producer of slabs, billets and blooms; which displaced MSC as the country’s largest steel exporter.

Strong domestic and export sales have allowed Iranian steelmakers to invest in capacity expansion, to capitalise from their low energy costs and consequent competitive DRI and crude steel production costs.   CRU, in its April 2018 edition of Crude Steel Market Outlook, had forecasted Iranian crude steel production to rise to 26.1 Mt in 2018, a 22% y/y increase.  CRU’s latest interactions with key market contacts suggest that major Iranian steelmakers, particularly the ones with high exposure to the export market, are in the process of revising down their production targets significantly for H2 2018, in response to the US action.

Outlook: Impact on Iranian steel trade to be limited to imports, while pressure builds on local demand
As US sanctions come into effect from August 2018, the most immediate impact will be on Iranian steel trade with the European Union (EU), the Gulf Cooperative Council (GCC) and South East Asian (SEA) nations; and on the country’s capacity expansion plan.  Related implications are detailed as follows:

Impact on Iranian exports
The country’s steel transactions with buyers in the GCC and SEA nations (mostly exports of semis) do not involve the use of letters of credit and have been developed to not be linked to the US, as we understand from our local trader contacts.  Thus, such transactions are likely to continue post re-imposition of sanctions with limited impact.  CRU understands that Iranian exporters may face certain difficulties in realising their payments, particularly when selling to buyers in SEA countries of Thailand and Indonesia.  Their transactions with buyers within the MENA region are likely to be facilitated through a variety of counter-trade arrangements, limiting the requirement of a monetary payment.

Another factor that needs to be highlighted here is the latest decree (announced on April 10th, 2018) from the Central Bank of Iran, which unifies official and open market exchange rate to IRR42,000 per USD.  This rate has been set far below the open market rate of IRR60,000 per USD on 9th April 2018.  Iranian steel exporters, who were benefiting from devaluation of Iranian Rial (which has lost over 50% of its value in the past year) are likely to be strongly impacted by this government intervention.  CRU’s contacts report that steel trading has come to a halt in Iran following this directive, as there is a lot of confusion in the market. 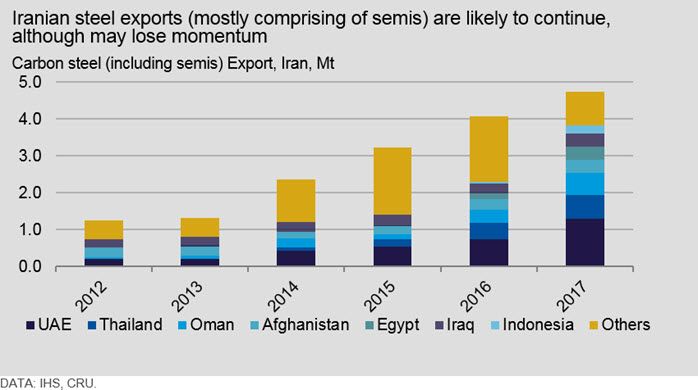 Impact on Iranian imports
Iranian carbon steel imports are mostly sourced from Asia (China and South Korea) and the CIS countries; while the country imports significant amount of downstream steel products (coated and pre-painted sheets) from the UAE. These transactions are likely to continue being facilitated by various counter trade arrangements.  CRU expects an interruption in Iranian steel transactions with the EU (mostly import of less than 2mm HR coils) which are denominated in Euros. CRU understands from leading Iranian importers that EU based exporters have started showing reluctance in selling to Iran; as they fear levy of secondary sanctions by the US, a far more lucrative market.

Nevertheless, the next couple of months are likely to see several transactions (distressed selling and buying) from Iranian market participants, while the government negotiates alternate trading arrangements with EU partners.  A silver lining is, nevertheless, the counter trade arrangement that Iran has already set up with countries including China, Russia and India; which may allow Iranian businesses to keep interacting with the global trading community. 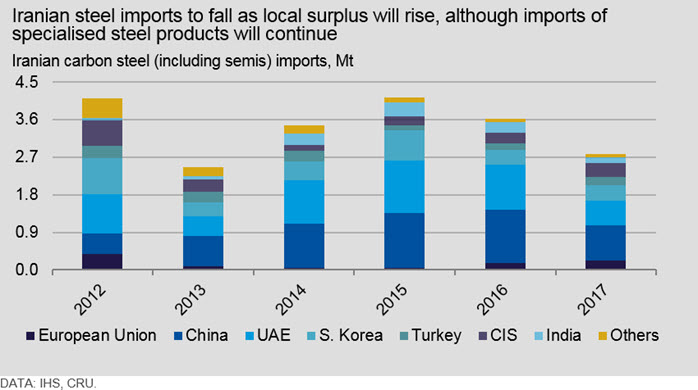 Impact on Iranian steel production expansion plans
As has been highlighted earlier in the text, rapid growth observed in Iranian steel production and capacity expansion has been a result of strong demand, both from the local and the export market.  After the re-imposition of US sanctions, we expect major local end users in the automotive and energy infrastructure sector to reduce activity and hence steel procurement.  Meanwhile, Iranian carbon steel exports (of semi-finished steel) are likely to be rangebound due to apprehensions in the seaborne market.

Cumulatively, these factors will put downward pressure on the country’s steel output growth.  Low output growth coupled with lack of financing for new/ongoing steel projects would mean that the “55 Mt/ y by 2025” target may face substantial delays.

CRU team continues to monitor related developments and has initiated modelling of the impact in its demand, supply and trade forecasts for the country.  Once complete, we will release a detailed analysis of medium term outlook for the Iranian steel industry to CRU’s market outlook subscribers.