Is China the solution to the World’s surplus ammonia problem? 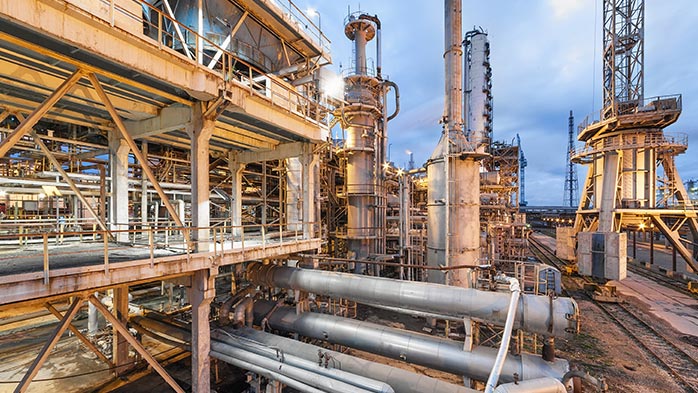 Traders are already touting China as a possible solution to an industry facing oversupply and they increasingly look to the country to absorb surplus merchant ammonia.  But, can the Chinese market absorb the surplus volume and what could be the impact on fertilizer markets if it does?


Surplus ammonia needs a market
Ammonia suppliers east and west of Suez are expected to benefit from sustained strong import demand from China in advance of significant capacity additions in Indonesia, the US and in the Baltic Sea.

Traders are already touting China as a possible solution to an industry facing oversupply and are increasingly looking to the country to absorb additional merchant ammonia, mostly to produce ammoniated phosphates, NPKs and for industrial use.

The surge in import demand follows a widening price spread between Chinese domestic wholesale ammonia prices and the import cost based on CFR China since July 2017, driven by an increase in Chinese anthracite coal prices (a central feedstock for nitrogen production in China) as well as an acute shortage of natural gas during H1 2017.

Merchant ammonia imports would only be considered unattractive if prices firmed close to $350/mt CFR China when compared with current equivalent domestic ammonia prices of $468/mt FCA Hubei, CRU analysis suggests. This takes into account transport costs, such as barge, rail or truck depending on plant location, and 16% VAT applied on ammonia for both domestic sales and imports since May 1 2018, but is contingent on freight availability.

Diversifying import origins
Chinese ammonia importers appear open to sourcing from any major origin, as long as it is competitively priced. Last year saw Indonesia hold a 44% market share, with Saudi Arabia at 20% and Trinidad at 10%.

China’s imports of Indonesian ammonia will likely increase further following the commercial start-up of the PAU Sulawesi’s 660,000 mt/year facility, now expected in August 2018. Marketer Mitsubishi is expected to target China as a key market given that the capacity of PAU is large relative to the size of the East Asian traded ammonia market. If run at full capacity, PAU’s production is equivalent to 28% of total 2016 East Asian imports.

Similarly, more displaced Trinidad ammonia may be directed to China after commissioning of the new BASF/Yara 750,000 mt ammonia unit at Freeport, Texas is complete. Industry sources expect the unit to begin commercial operations by the end of June which should largely serve domestic US ammonia demand and will push competitively priced Trinidad ammonia to other parts of the globe, including China. This means the premium between prices east and west should continue.

Investment may be key
Given the importance of Chinese ammonia imports in an oversupplied merchant market, traders may opt to invest in improving port infrastructure and inland transport of ammonia to ensure imports remain at high levels. 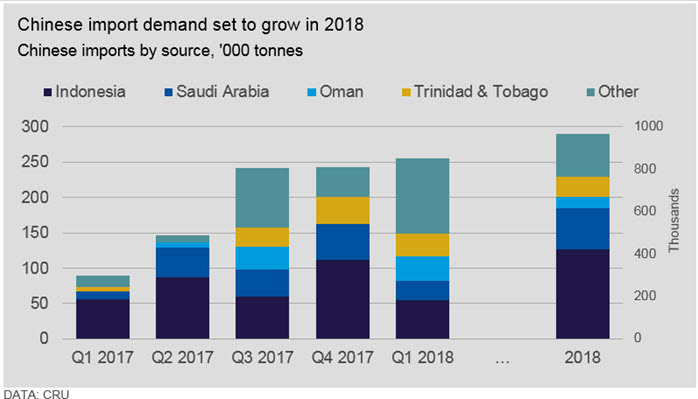 Trammo invested in the development of Nanjing port in 2014 by buying majority shares of Jiangsu Anderfu Chemical Trading Co, a private company engaged in the transportation and distribution of ammonia. In 2015, Oiltanking Nanjing Co. started building dedicated tanks for ammonia at Nanjing port in collaboration with Trammo.

Zhanjiang of Guangdong province started to import ammonia in mid-2017. The region has the largest storage capacity for liquid ammonia at port in China so far. There are currently two sets of 30,000 cubic metres low temperature fully refrigerated tanks and two sets of 2,000 cubic metres normal temperature pressurised tanks which have been operating since 2004.

Additional investment in specialised barges and rail tank cars could help to maintain ammonia imports above 700,000 mt/year by improving freight availability and lowering costs, with construction of new port facilities and expansions of existing port ammonia tanks also being considered.

Of course, producers of downstream fertilizers may elect to recommence purchasing of ammonia from the local market should Chinese domestic wholesale ammonia prices drop below the import cost. That could bring Chinese ammonia imports back to the level of 400-500,000 mt/year, fuelled only by the needs of the big three petrochemical producers in Shanghai, SECCO, BASF and Bayer.

Uncertainty over the extent of China’s Communist Party environmental policy could also have a bearing on future ammonia imports. There will be further closures of domestic ammonia capacity which would necessitate imports, CRU forecasts, but exact figures are difficult to ascertain.

Conversely, inland transport of volatile ammonia may be subject to stricter Chinese environmental regulations in the future possibly requiring reduced speeds for trains hauling ammonia tanks. These regulations would be similar to those imposed by some local governments in the US in prior years. This could also push up the cost of moving ammonia in China due to rising insurance costs.