NMC 811 adoption in the auto sector hits a speed bump 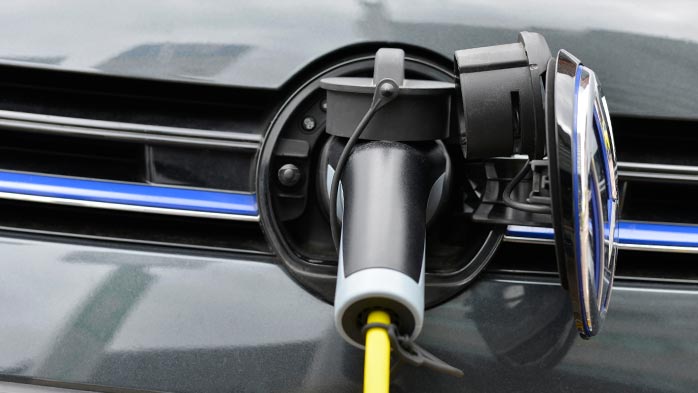 SK Innovation were widely expected to become the first battery manufacturer to commercialise NMC 811 cells within the new Kia Niro BEV, launching early next year. However, recent reports suggest that the Kia Niro will now contain the industry-standard NMC 622 cells due to concerns from Kia surrounding the unproven safety aspects of NMC 811.

Battery chemistries used in the electric vehicle (EV) sector can be broadly split into two categories: nickel-based and non-nickel-based.

NMC 532 and NMC 622 are rapidly becoming the industry standard within the EV industry due to their high range, ease of manufacture and thermal stability. However, there is a continued push to develop NMC 811 battery chemistries which benefit from a lower cobalt content and a higher energy density.

NMC 811 development not driven by cobalt supply fears
One of the key reasons cited for the development of NMC 811 has been its reduced cobalt content. CRU estimates that NMC 811 typically contains just 70g of cobalt per kWh, compared to 150g for 532 or 170g for 622. For a standard 64kWh BEV (like the Kia Niro BEV), this is equivalent to a cobalt content of 4.2kg, 9.6kg and 10.9kg respectively.

While reduced cobalt content is likely to be a major factor in reducing long-term battery costs in terms of $/kWh, we do not believe that cobalt scarcity concerns are driving this shift to NMC 811. The battery sector is expected to remain well-supplied with cobalt sulphate for the next 5 years at a minimum, and as such we do not expect cobalt sulphate shortages to materialise. In addition to this, while manufacturing costs will undoubtedly decrease over time as scale increases, NMC 811’s highly stringent requirements in terms of dust, moisture and contamination control make manufacturing currently very expensive, despite cheaper raw material costs. 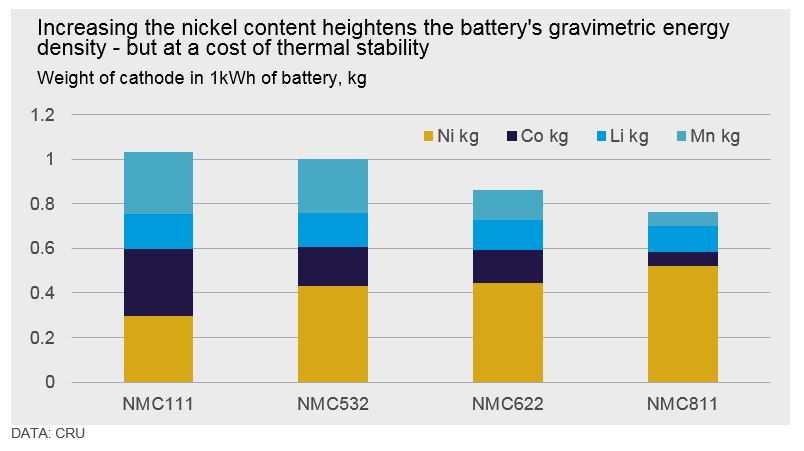 CRU believes that the current push to commercialise NMC 811 is more being driven by a desire for higher energy density, as opposed to a desire for reduced battery cost or concerns around cobalt availability. CRU estimates that NMC 811 batteries have a 5-10% higher energy density compared to NMC 622, which allows for weight savings, efficiency gains and increased range in BEVs. Because of this, NMC 811 cells are more likely to be slowly adopted in the high-end luxury BEV segment before they reach widespread adoption in the more affordable BEV models of major OEMs.

This higher energy density is especially important in the Chinese BEV sector for regulatory reasons. Starting in 2020, the Chinese government will introduce new regulations which will dictate various properties of battery cells sold in China for use in BEVs. These include a maximum cost in RMB/Wh, a minimum manufacturing scale and – most importantly – a minimum charge density in Wh/kg. These standards are designed to make the Chinese EV sector competitive with incumbent countries like Japan and South Korea, who have traditionally dominated the battery industry.

SK Innovation delays introduction of NMC 811 Cells
At the end of last year, SK Innovation announced its intention to develop and commercialise NMC 811 batteries for use in the EV sector as early as Q3 2018. The first vehicle to ever use the new technology was expected to be Kia’s latest BEV offering, the Kia Niro; however, these plans have apparently been abandoned recently due to concerns from Kia over the technology’s safety and chemical instability. Instead, the Kia Niro BEV will now use NMC 622 cells when it is finally launched early next year.

This recent announcement is indicative of current views towards NMC 811 in the auto sector. While NMC 811 offers significant benefits in terms of increased energy density and weight reduction, it remains unproven in terms of lifespan for BEV applications. This is a concern to OEMs who are keen to offer long-term warranties for their BEV batteries in order to allay customers’ fears of battery degradation over the vehicle’s lifetime.

However, this only represents a minor speed bump in the road to commercialisation of NMC 811. SK Innovation’s NMC 811 cells are now expected to first be used in Mercedes-Benz’s e-SUV launching later next year. They will most likely be supplied from SK Innovation’s new 7.5GWh production facility in Hungary, from which it is perfectly positioned to supply the rest of the European high-end vehicle sector.

NMC 811 unlikely to gain traction for several years
While several major battery manufacturers including CATL, SK Innovation, Samsung and LG Chem are investing heavily in NMC 811 cell production, CRU expects that it will take much longer than generally expected for NMC 811 to gain significant market share in the EV sector. There are two main reasons for this.

Firstly, we expect that major OEMs will continue to be hesitant to use new battery chemistries which have not yet been proven over long timescales. A Dieselgate-like mass recall of BEVs due to safety concerns could be massively damaging to any OEM’s first attempt at a mass-produced affordable BEV, and we do not believe that major OEMs will be willing to gamble on an unproven technology for the sake of marginally improved efficiency or range. 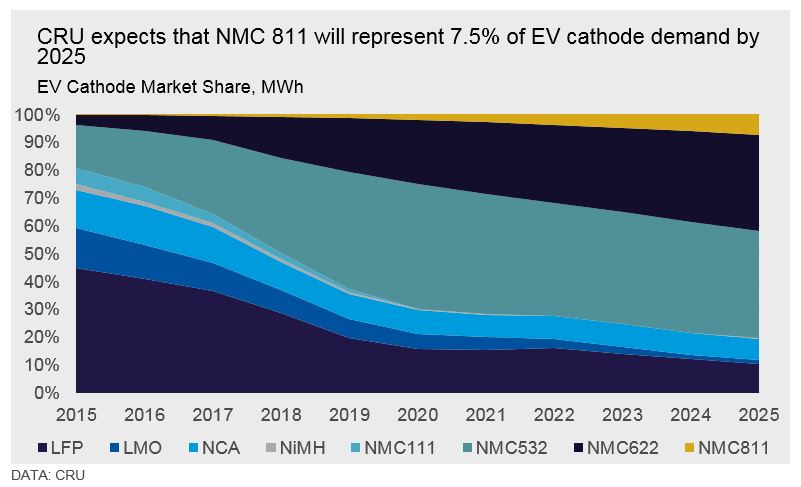 Secondly, NMC 811’s stringent requirements in terms of moisture, contamination and dust control means that it is very difficult to retrofit an existing NMC manufacturing facility to make 811 cathode. CRU understands that making the jump from 532 to 622 is relatively straightforward due to similar cleanliness requirements; however, the development of 811 typically requires a much larger investment in new facilities to guarantee no contamination. For this reason, we believe that even if NMC 811 becomes widely accepted as a BEV battery chemistry in the coming years, large investment requirements will result in a manufacturing bottleneck for the material.

The adoption of NMC 811 is without a doubt the next major development in the battery chemistry space and will bring with it larger battery ranges and a reduced dependence on cobalt. However, the recent news from SK Innovation suggests that OEM sentiment will result in NMC 811 taking longer to be adopted than originally expected.