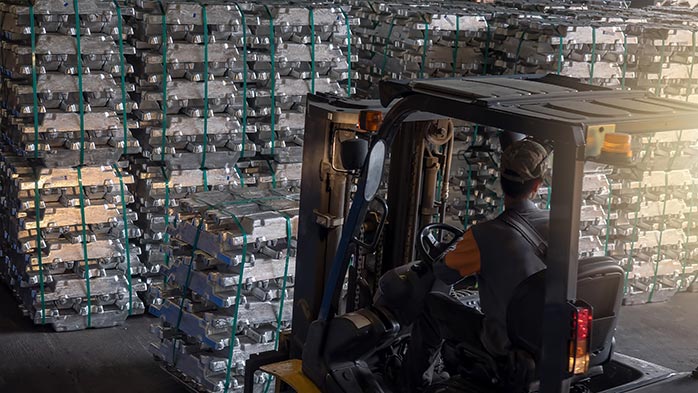 According to our analysis, Aluminium smelting costs sharply reversed their five-year decline in 2017, as the world average site cost rose by 20%.


Each of the major raw materials input costs rose year-on-year. However, despite the sharp rise in operating costs, aluminium smelters’ revenues were strengthened in 2017, due to an even sharper rise in the LME and SHFE prices. Aluminium smelting costs are expected to continue to rise in 2018 and 2019, as raw materials prices remain elevated, but margins will decline.

CRU’s Alumina Price Index (API) averaged $353.95/t in 2017, up over $100/t compared to 2016 and the highest annual average since 2011. During the same period, although the LME 3-month price also increased by 22.9% y/y, the rise in the API was much stronger, at 39.7% y/y. The boost in refining costs was a contributing factor, however the strong adoption of index-based pricing has allowed alumina to respond more sensitively to alumina market fundamentals and soaring sentiment from several announcements throughout the year relating to alumina winter cuts in China.

The balanced alumina market has shown vulnerability in 2018. Hydro’s 6.3Mtpy Alunorte refinery in Brazil has been operating at 50% utilisation since Q2 2018, due to alleged breaches of regulations. Alumina prices reached record high levels in April 2018, eventually reaching $690/t Australia FOB, which represented 29.6% proportion of the LME 3-month aluminium price. A wave of force majeure announcements followed the US sanctions against UC Rusal and allowed panic to sweep across the alumina market. On 8 August, it was reported by the Australian Workers’ Union that Alcoa workers in Western Australia walked out indefinitely over an enterprise agreement dispute with the company. Alcoa has stated that the walkout has not impacted alumina production. However, alumina spot prices have been significantly driven up, which push some smelters under water.

In the Chinese domestic market, CRU’s China alumina basket price reached a peak of RMB3,675/t in October 2017 due to the winter closure policy. In 2018, the China alumina price has been affected by a shortage of domestic bauxite and the above factors outside China. The alumina price as a percentage of the SHFE price is much lower than for the world ex. China market, as shown in the accompanying chart.

Due to the strong API, the arbitrage window has opened in 2018 for Chinese alumina exports. Contracts to export over 200,000 tonnes of alumina from China were signed in July amid a favourable price arbitrage. CRU has also received indications of another nine contracts being negotiated in August 2018, amounting to 265,000 tonnes being exported out of Shandong, Guangxi and Shanxi. The alumina cargoes are being exported to Europe, Africa and elsewhere in Asia. The consensus is still that Chinese alumina exports remain a temporary solution. Alumina market conditions are expected to tighten in China in Q4 2018. CRU expects winter cuts to be repeated in Henan. Refineries are also contending with domestic bauxite shortages following environmental inspections and this will allow Chinese alumina prices to hold firm at the RMB3,000/t level.

CRU estimates around 71% of alumina consumed outside China and 63% of alumina within China is priced according to alumina indexes in 2018, up from 66% and 58%, respectively, in 2017. It indicates that any changes in alumina spot prices will increasingly affect aluminium smelting costs around the world.

Soaring carbon materials’ prices driven by tight supply
In 2016, the Chinese calcined petroleum coke (CPC) price was lower than in the US and Europe markets. However, the Chinese government has followed through on its promise to impose strict control on air pollution in 2017. The impact has been broad, spanning major industrial markets such as aluminium and steel, and spreading to other heavy-polluting product markets such as calcined coke, coal tar pitch (CTP), and carbon anodes. The closure of calciners and steel plants had a great impact on CPC and CTP supply in the Chinese market, resulting in the price increase of CPC and CTP, as shown in the following chart. After the 2017-2018 winter heat season, domestic CPC and CTP prices have eased. We expect CPC and CTP prices in China to rebound again in Q4 2018 due to the winter closures.

Because global smelters have become increasingly reliant on Chinese carbon products since 2000, carbon materials became tight in the global market after the winter closure affected the supply from China in 2017. CRU expects high CPC prices will boost CPC production outside of China, which is set to grow at a faster average annual rate than China in the forecast period. Tough market conditions over the past several years have resulted in coke battery closures and even full-scale shutdowns at many steel mills across the globe, most notably in Europe and North America. Less coal tar production in Europe and North America will keep CTP prices firm in the medium term.

From the highly detailed, base case starting point, the user can easily construct a spot cost curve derived from current raw material prices. Quarterly updated macroeconomic data for aluminium cost model that CRU suppliers to our clients includes global/regional alumina benchmark prices, carbon products prices, energy prices, exchange rates, ocean freight rates and other indicators, which are very helpful for analysts to catch up the latest trend around the world. By changing these factors in the different scenarios, the users can easily estimate the impact on aluminium costs and profitability of aluminium smelters. As a powerful cost analysis tool, CRU aluminium cost model more embodies its value under the current dramatic market.