Aluminium smelter capacity is needed – but who is going to pay for it? 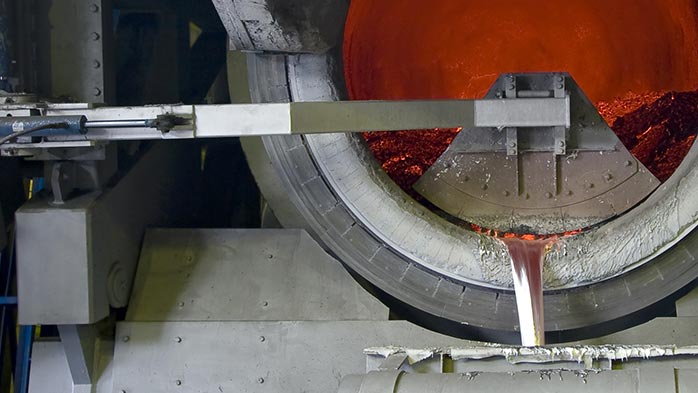 LME aluminium inventories fell below 1Mt for the first time since 2008. CRU forecasts a 1.7 Mt world deficit in 2018 and the market will soon need additional supply.


With very few new smelters being built outside China and with supply-side reforms capping Chinese expansions, it is now time to start considering new investments in smelter capacity. But capital for new investments is limited, particularly as 40% of smelters are losing money due to high operating costs. Currently, high cost smelters are under threat of closure due to escalating raw material costs, and remaining idled capacity is mostly likely to remain closed. Eventually, with no near-term boost to supply and inventories set to dwindle the price must respond. This will be a key signal for a capex turning point from western companies, but they will be wary of how the Chinese will also respond to higher metal prices.

Where we are now: Falling stocks and low capex
Consistent growth in demand globally and limited new supply has resulted in an expected market deficit of 1,7 Mt in 2018. Consequently, inventories are decreasing to make up for the supply gap, and LME inventories have fallen below 1 Mt for the first time since 2008. 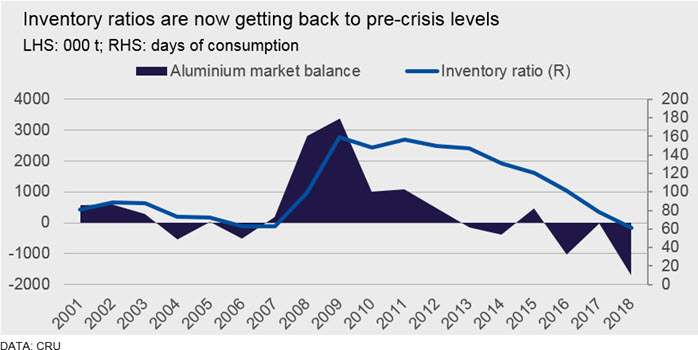 In a typical cycle, one should expect inventory drawdown and higher prices to be followed by investments in smelting capacity. However, since the major China-led expansions between 2012 and 2014, capex in new smelting capacity outside of China is now at its lowest level in close to 20 years. The average capex in the industry from 2008 to 2014 was $6.2bn per year, whilst the average since 2015 is $4.7bn per year, 25% lower in real terms.

In addition to that, total aluminium inventory levels are currently running close to 60 days of consumption, the lowest ratio since before the Global Financial Crisis (GFC). However, in the past low inventories prompted an increase in investment, now both are heading lower.

After the GFC, low capex in the industry matched a period of peak levels of inventory, as shown in the highlighted area 1 in the chart below. However, the area highlighted as 2 shows an inversion of this, with low capex matching low inventory levels. It indicates a positive sign for prices, in order to call for more smelter investment. 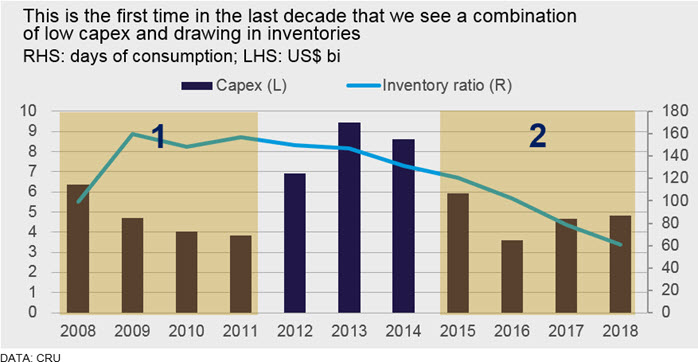 How we got here: It’s not all fundamentals when talking about China
Since late 2000s, the aluminium market shifted its focus to China. The country, which in 2000 accounted for only 10% of world production and demand, now accounts for over 50%. Meanwhile, the rest of the world aluminium producers halted investment, with the market in surplus, prices at low levels and LME warehouse inventories reaching a peak of 5.4 Mt in 2013.

In China, fundamentals were not encouraging either, but new capacity kept coming online at that time, with the largest expansions taking place between 2012 and 2015, when producers were struggling with low prices. During this period, capacity in China increased from 26 Mt to 38 Mt, roughly 10 times the rate of capacity growth outside of China during the same period. This rapid expansion came predominantly from the private sector, as shown in the chart below. These investments went ahead without central government approvals and were fuelled by a large increase in debt levels. China is clamping down on free-wheeling expansions from private companies and this capacity growth will not be repeated. 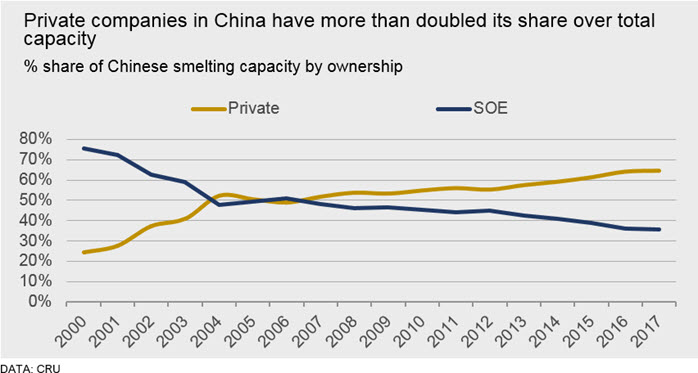 Indeed, since 2016, the Chinese government has been determined to tackle overcapacity in different industries, including aluminium. Motivation for the reform varies from protectionist pressures overseas to pollution, but the movement also had a positive financial effect for the state-owned aluminium companies. Illegal capacity closures have taken 3 Mt of operating capacity out of the market and resulted in a dramatic reduction in capacity growth. This puts the onus on the western world to invest again.

Outlook: Deficit is cool, but cash is king
With the market in deficit, the next natural step is for new investment. However, even though prices have rebounded from the lows of 2015-2016, producer margins are squeezed because of increasing costs. CRU estimates that 40% of the industry is currently operating at a loss, limiting the capital availability for new investments. The average margins in the industry are at the lowest level in the decade, as can be noted in the chart below. 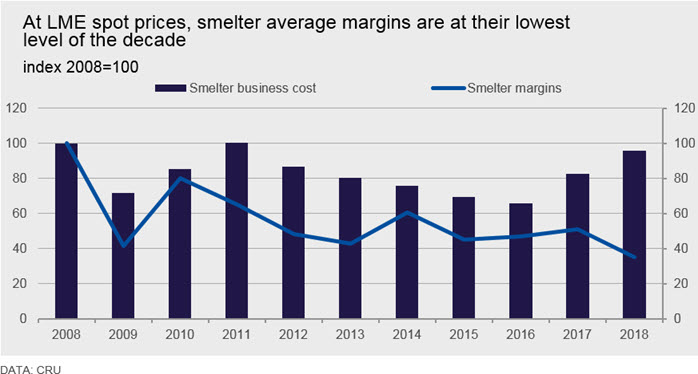 With tight margins, high cost smelters are at risk of closure
Alcoa reported in its 2018 3Q results a change of -6.3% of margin for the aluminium business unit, and the lowest quarterly adjusted EBITDA for the smelting unit in the last two years. The company announced that it is beginning a consultation process in Spain aiming to close its two smelters La Coruna and Aviles, which have together 180,000 t yearly capacity.

In China, five smelters have recently announced cost-related closure: combined these plants in Gansu and Shanxi will close over 500,000tpy, confirming that a sizeable share of smelters are losing money today.

Low margins delay the inevitable investment
In this case, even if fundamentals are shaping an encouraging environment for investments, we are still not at the turning point for capex, with producer margins having to increase much further before they will spend on new plants.

The LME aluminium price has been unresponsive to high costs and decreasing inventories so far, which ultimately will further tighten supply and will send prices even higher eventually. But it will take time for investments to be delivered. For major decisions to take place, the market rebalancing and margins improvement need to be sustainable. Indeed, how China reacts when high prices come will be a key signal.

The Aluminium Long Term Market Outlook presents a market balance for aluminium by major region through to 2028 including production and capacity data by smelter. We discuss the need of new smelting capacity and the risks to the outlook presented. By using detailed project costs we forecast the Long Run Marginal Cost (LRMC), discussing the price levels that are enough to attract new smelter investments. The next edition will be launched in December of 2018. For further information on CRU's Aluminium Long Term Market Outlook, as well as other products from CRU which focus on the aluminium market, please complete the form below.