Strong outlook for European steel in 2018 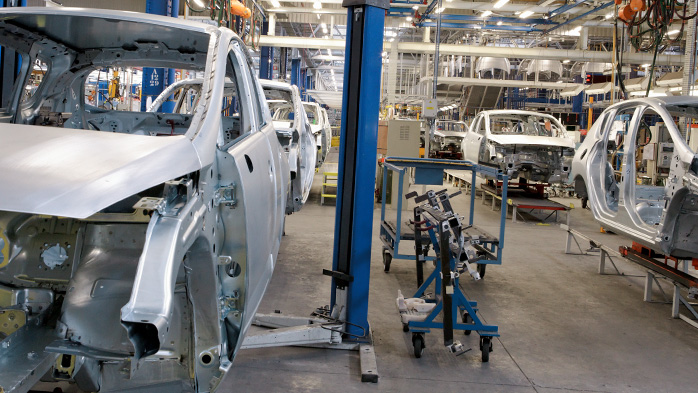 We hold a positive outlook for European steel this year.  This is driven by both demand and supply side factors including strong expected output from steel-consuming sectors of the economy and restrictions on certain supply sources.  Higher domestic capacity utilisation is expected to result.

This year looks set to be another strong one for European steel prices and especially margins. There are several reasons why we hold this view. These include:

Macroeconomic indicators
The years immediately prior to the recession of 2009 are sometimes used as a reference point, against which current performance is measured and generally found to be relatively lacking. But in truth the level that the European economy reached during 2006-8 was an outlier. It is now a long time since that recession and in Europe things have moved on. At a high level, growth in industrial production (IP) was 2.6% last year for Western Europe. Other than 2010-11, when IP was recovering from a very low post-recession base, this was the strongest annual growth recorded for ten years. In 2018 we expect to see a further 2.1% growth in the same index.

At a more directly-relevant level for steel we can examine indices of output in the construction, manufacturing and automotive sectors.  These also point to a good year in steel-consuming sectors of the West European economy.  Our measure of value added in the Western European construction sector is forecast to increase in 2018 to its highest level since 2010, recording a further 1.4% increase from what was already a great year in 2017. 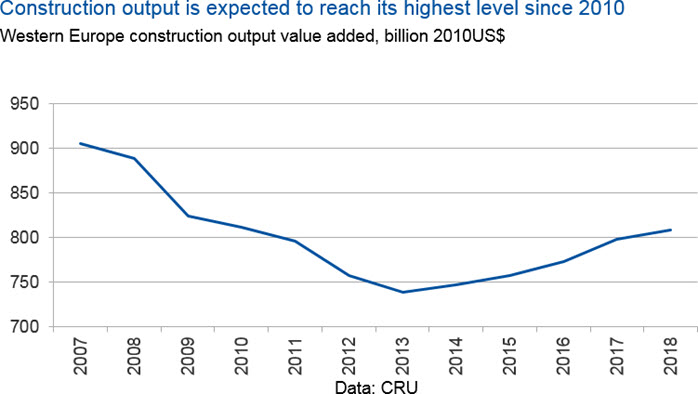 Meanwhile growth in overall manufacturing output is forecast to continue at the same healthy level (2.3%) as in 2017.  And if we turn to the West European automotive sector, while admittedly new car production is not expected to regain its peak level of around 15 million units per year seen in the early 2000s, output in 2018 is nevertheless forecast to be at the highest level achieved since 2007; close to 13.2 million units.

Steel demand
That macroeconomic picture feeds into our expectations for steel demand, which are accordingly strong for 2018. We expect to see the following for finished steel in Western Europe:

Inventory cycle
As a short term factor we contend that the inventory cycle going into the early part of 2018 is likely to be supportive towards prices. Flat products inventories appear to have reached unusually low levels towards the end of 2017. At that point there was a large round of buying in the market. But given that inventories were low and given that end use demand is strong we expect that buying will not have caused stock levels to rise beyond what would be considered normal or balanced; indeed there is the risk they might not even achieve that level. That would suggest that further buying both for real consumption and for inventory rebuilding may be justified or required during the first months of the year, lending an incremental boost to demand.

Constrained steel supply
The above positive demand picture will meet with a supply side that is somewhat constrained or restricted. The EU now has in place a range of trade defence measures against many finished steel products, largely but not exclusively against China. For the most part while the applicable duties are not set at US-style insurmountable levels they do present an effective barrier and we can see from the trade statistics that import flows from affected countries have markedly reduced.

Other offshore sources can substitute and are substituting for the blocked volumes. However, depending on the product this may not be a 1:1 volume replacement. Taking steel sheet as an example, with China, Russia, Ukraine, Brazil and Iran all blocked on HR coil only India and Turkey remain as viable large-scale exporters to the EU and to date these have not been able to fully offset the losses from all the blocked countries. Likewise there are buyer concerns in the HDG coil market over where more than 2Mt/yr of Chinese product might be re-sourced from in future.

Where volumes can be re-sourced it is also worth noting that the unit prices of the re-sourced product may not be so favourable as was previously achievable from Chinese suppliers.​

A further factor is the ongoing supply side reform in China. We expect that one impact will be lower export volumes from China, as higher utilisation leads to better domestic profitability and reduced desire to move material offshore for relatively lower margins. As discussed, direct sales from China to Europe are largely blocked, but the impact of this will still be felt in that reduced Chinese sales to Asian markets will create a demand for steel in Asia from other international suppliers such as India, Vietnam or Turkey for example. Supply from these sources will in turn be reduced, or offered at higher prices, into Europe.

All of which provides an opportunity for the domestic European steel mills to capture some of what was previously import business. This is not without advantages to steel consumers: shorter lead times, high product quality, relatively low carbon footprints, traceable logistics and relatively low counterparty risk are features of the majority of Europe’s steel producers. But of course as the saying goes “you don’t get something for nothing” and these value items will most likely be recognised and charged for by the mills.

Northern versus Southern Europe
While we think that the supply and inventory sides of the above equation are more or less applicable Europe-wide, there are differences in the demand picture between the north and the south. Overall strength is clearly being driven by the north. Below are two charts showing measures of construction and manufacturing sector output in Germany and Italy. The divergence in performance, especially in the key construction sector, is marked.

Expectations for 2018 are of year-on-year growth in Italy but that growth is both off a much lower base and also at a slower pace than in Germany.  Having said that it is also noteworthy that the pace of German growth in these key steel-consuming sectors is expected to slow in 2018 versus 2017, whereas in Italy the growth rate is forecast to be higher in 2018 than it was in 2017.

So while Germany may see larger absolute levels and annual increases, in terms of how things feel relative to the prior year Italy could be the better performer.

Conclusion
Our expectation is that in 2018 strong demand will combine with constraints on supply, primarily resulting from trade barriers. Utilisation at domestic mills is forecast to increase. For example, hot strip mill utilisation for the EU28 as a whole is expected to reach 76.3% in 2018, up from 74.6% in 2017 and 72.8% in 2016. Increased utilisation implies a greater degree of pricing power accruing to the mills, though with strong end use demand should come an ability to pay and perhaps pass further downstream any increases in steel prices.