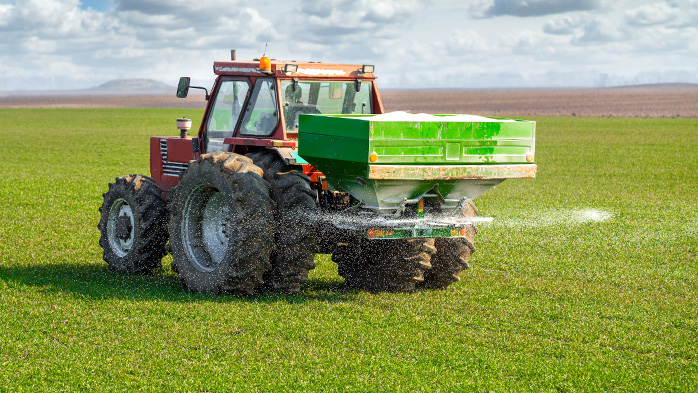 Two new large UAN plants came on stream in the USA over the last two years, resulting in a decline in USA imports, and a dramatic increase in exports. The battle to displace UAN imports will focus on the USA’s Eastern Corn Belt as the USA’s new production battles for market share with importers.


USA East Coast imports decline as new capacity comes on stream
The USA added 2.74 million tonnes per annum of UAN capacity over the last two years, which about matches 2017 USA imports. While imports have declined modestly, USA exports increased dramatically from 0.5 Mt in 2015 to an estimated 1.6 Mt in 2017. There have been shifts in USA imports by region and by source.

In 2014, 40% of UAN imports were on the USA’s East Coast (including Mobile, AL as imports from that port go the eastern half of the USA) at over 1.1 million tonnes. For January through October 2017, UAN imports to the East Coast have declined to about 36% of the USA total and we forecast the total East Coast 2017 imports at around 0.9 Mt.

There are several reasons for this. The largest is the two new large plants by CF Industries in Donaldsonville, LA and IFCo in Wever, IA. CF has commissioned a new vessel to ship UAN to tanks on the East Coast, which would compete directly with East Coast imports. In addition, production at IFCo’s new plant in Iowa is likely to target East Coast customers via direct rail. The new capacity has also put pressure on UAN prices which declined from an average of $239/st in 2015 to a low of $145/st this past year, putting margin pressure on global marginal producers.

In addition, marginal suppliers have seen volumes decline including China, Belarus, Bulgaria, Poland and Egypt. Lithuania increased its UAN exports to the East Coast, which is somewhat surprising given our estimate of their costs. We expect Lithuanian exports to the USA to decline over the medium term.

Chinese imports have declined by nearly 200K to the West Coast, displaced by Russia and Trinidad
The largest import decline for the first ten months of 2017 was for China. Chinese export mainly to the West Coast, where they have a slight logistics advantage compared to the East Coast. However, both Trinidad and the Russians have targeted the West Coast market as they have lost volume in the East Coast market and the Russians have also lost volume in the US Gulf.

The increase of 191K for Russian and Trinidadian exporters to the West Coast about equals the loss by China of 194K. The current West Coast UAN prices of about $190 to $200 per st are below estimated Chinese delivered costs of over $210/st. Trinidad’s ocean freight to the West Coast is not that different from the Chinese, but their site costs are much lower. The Russian transport costs would be much higher, but this is more than offset by much lower costs on a FOB basis. The result is that both the Trinidadians and Russians have a considerable delivered cost advantage over the Chinese on the USA West Coast, resulting in a large gain in market share at China’s expense.

Trinidad exports gain in the USA Gulf at the expense of Russia and Belarus
In the USA Gulf, UAN imports were 0.6 Mt, down just slightly from the prior year. However, imports from Trinidad increased by 50%, about equal to its total from 2015. Most of this is imported into the New Orleans area. Imports from Russia declined 92K t and from Belarus declined 45K t. Trinidad’s volumes to the USA Gulf are expected to remain near current levels over the medium term.

USA is the most competitive in the Eastern Corn Belt
The chart below shows UAN delivered costs to the Eastern Corn Belt of the USA by the major suppliers. It is no surprise that USA producers are low cost suppliers to this market as they have low-priced natural gas and are located in the region resulting in a logistical advantage. 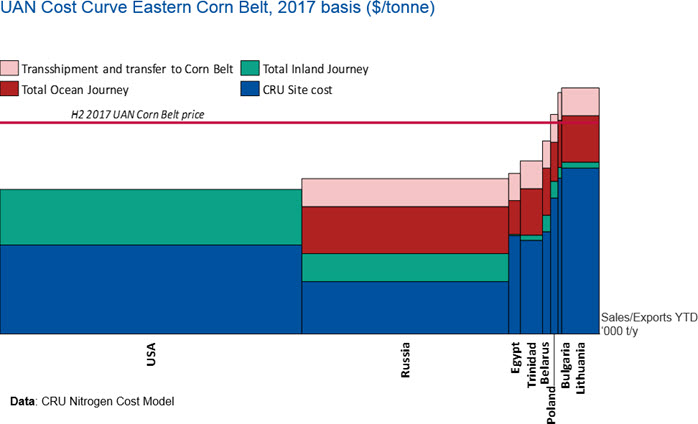 Site costs are low for USA producers, though higher than those for Russian producers. However, the USA producers have much lower transportation costs to the Eastern Corn Belt. CRU are forecasting Russian and Lithuanian UAN imports to be displaced by USA producers based on their cost and logistical advantages.

USA UAN exports have tripled over the last two years
USA UAN exports are expected to be around 1.6 Mt in 2017, resulting in the USA becoming the second largest exporter, just behind Russia. The largest growth in the USA’s UAN exports over the last two years has been to West Europe, particularly France. These offshore exports are from CF’s Donaldsonville plant near New Orleans, which is in the best position for USA exports, located near the New Orleans port with competitive costs delivered to the UAN markets in Europe and Latin America. 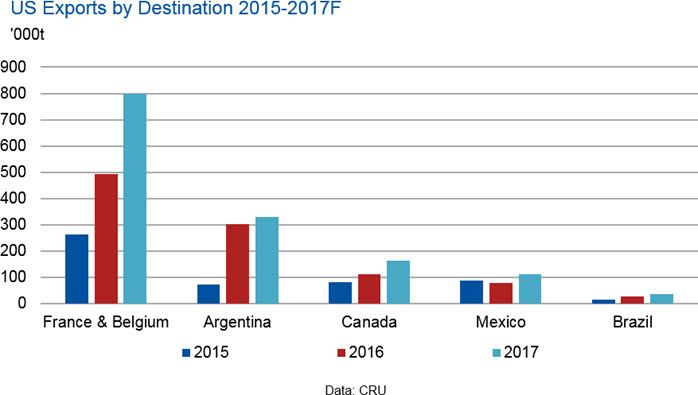 CRU forecasts USA UAN imports to continue to decline and exports to remain high
CRU expects total imports to continue to decline over the next four years by about 1.0 million tonnes. By region, imports into the East Coast and the Gulf Coast are forecast to account for most of the decline, while West Coast imports are expected to remain near current levels. Imports from Trinidad are expected to be about unchanged, but Lithuania and Russia imports are forecast to decline.

We forecast that the USA will increase UAN exports to 1.7 million tonnes and that Europe will remain the largest destination, though exports to Latin America are also expected to grow.

CRU has published a UAN market outlook as the first section of the report Fertilizer Nitrates Market Outlook: AN/CAN/UAN, which will be published with all sections in March 2018 and the UAN section is available now. In addition, CRU will publish its annual update to the Nitrogen Cost Model in January 2018 and will include updated costs on ammonia, urea, AN and UAN.