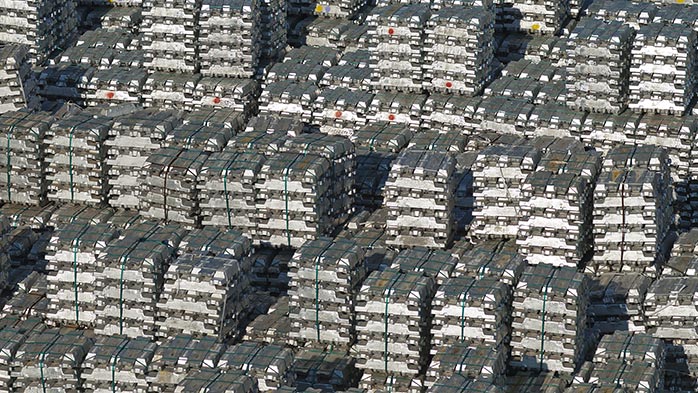 US government sanctions have threatened the viability of the largest primary aluminium producer outside China.


The Trump administration sanctions prohibit UC Rusal from selling in the US and prevent US banks from providing services to UC Rusal. As a result, major metal offtake agreements have been frozen and non US banks are distancing themselves from transactions with UC Rusal for fear of secondary sanctions. This follows the Section 232 and Section 301 investigations, which taken together confirm that the Trump administration has transformed the global aluminium market.

US sanctions transform the aluminium market
CRU has determined two possible outcomes from the UC Rusal sanctions and we attribute a 50/50 chance between these outcomes.

Resolution is reached, which side-lines Oleg Deripaska and allows for Russian primary aluminium, produced after April 6, to be bought and sold in a sufficiently large market for UC Rusal primary aluminium production to continue uninterrupted.

No resolution is reached to the UC Rusal saga, despite nationalisation of the company. Russian output is reduced as a result of lower alumina imports and a shortage of buyers. A cap on Russian demand and limited exports means metal is trapped in Russia, and as a result the LME price will soar to $3,000/t to prompt exports from China. 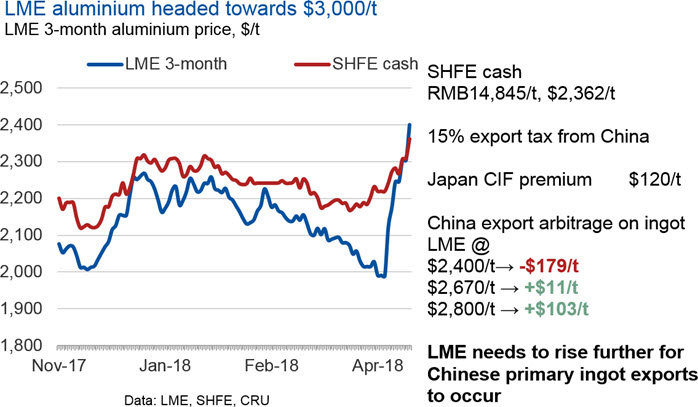 1. Liquidity for ongoing operations
The sanctions mean that UC Rusal’s market access has been massively constrained. The company has already received short-term liquidity from the Russian government and full nationalisation looks likely. Operations in Russia are the most insulated from sanctions. The Sunndsval (Kubal) smelter in Sweden may be unable to function as a UC Rusal entity if funding from the Russian state cannot be channelled to Sweden. The same is true of the alumina refineries in Ukraine, Australia and Ireland which may need to curtail output in coming weeks or. This may depend on whether nationalisation is possible by the respective governments.

2. Limits (ban) on receiving payment
All US banks are barred from dealing with UC Rusal, which takes out commodities heavyweights: Citi, Goldman Sachs, JP Morgan and Morgan Stanley. These banks, or any US-bank, is not permitted to process any transactions involving UC Rusal.

Non-US banks are exercising utmost caution in any transactions that involve UC Rusal. Transactions may be possible in euros, or other non-US dollar currencies, but as it stands these transactions are not being processed. The sanctions make it clear that non-US banks that knowingly facilitate significant transactions on behalf of UC Rusal can be penalised. This effectively rules out any large banks offering a system that by-passes the sanctions, as that would clearly be a breach of the secondary sanctions.

Chinese banks are an option for UC Rusal, and we expect UC Rusal to sell metal into China.  We have heard that rouble and renminbi transactions are being considered by Chinese buyers, mostly traders. Small Chinese banks and traders may take the metal, even given the risk of secondary sanctions. However, Chinese primary aluminium producers will not be pleased if large volumes of Russian metal are imported. Large Chinese traders have already declined to import UC Rusal metal into China, according to our market contacts.

3. Off-take agreements
Off-take agreements are a large part of UC Rusal sales volumes, more so that any of the other major aluminium producers outside of China. An off-take agreement is a deal that guarantees supply of metal over a period of time at a pre-agreed price price, usually based on LME plus a previously agreed upcharge or differential to prevailing market premiums.

Sales to Glencore accounted for 31% of UC Rusal sales in 2016, and Mechem and Toyota were also amongst the company's top five customers in 2016. Glencore has reportedly declared force majeure on deals to supply UC Rusal metal to consumers. Glencore holds an 8.75% stake in UC Rusal but appears unable to purchase metal from the company. Indeed, Glencore is distancing itself from UC Rusal, and the company’s CEO has stood down from the UC Rusal board of directors. While the UC Rusal offtake constitutes a sizeable chunk of aluminium trading profits for Glencore, it is not material to Glencore’s overall profitability.

4. Supply of smelter raw materials
The company's ability to secure all necessary raw materials to maintain normal operations looks uncertain. Alumina and bauxite supplies from the company's facilities in Ireland, Australia and Guinea, which are needed to keep its Russian smelters running, are at risk of disruption. UC Rusal sold 2.2 M tonnes of alumina and purchased 1.6 M tonnes of alumina, which puts other smelters at risk of raw materials supply disruption, as confirmed by Rio Tinto’s force majeure announcement.

Without a resolution to the sanctions and normal trade resuming, UC Rusal will be forced to partially curtail smelters in Russia, due to a shortage of alumina. The company is also heavily dependent on imported coal tar pitch and anodes.

5. LME brands suspended
As of April 17, no freshly produced UC Rusal metal can be delivered into an LME warehouse. The move from the LME came after members complained that purchasing UC Rusal material, produced post April 6, could be a breach of US sanctions.

This means that UC Rusal’s market of last resort has been closed. Owners of UC Rusal metal, purchased prior to April 6, will still be able to deliver that metal into LME warehouses after April 17, once all LME conditions have been satisfied.

The LME suspension is a major blow to UC Rusal, particularly as the off-take agreements appear to have ceased. But the closing down of financial markets had already made deliveries into LME warehouses nearly impossible.

6. SHFE brands remain
Output from two UC Rusal smelters are approved to be delivered into Shanghai Futures Exchange warehouses; Irkutsk and Sayanogorsk. These smelters produced 418,000t and 534,000t respectively in 2017.
Selling on SHFE could be an important channel for the UC Rusal material. However, SHFE inventories are at near record highs and there is only space for a few hundred thousand tonnes of aluminium in SHFE warehouses. However, the experience of bumper LME inflows in recent years, shows that new warehouses capacity can be approved in a short period of time. UC Rusal will still need financial institutions to facilitate the deliveries into China, which could be problematic.

What matters for the global market?

At the CRU World Aluminium Conference in London from April 23-25, we will host a special session which will bring together aluminium market commentators to discuss short term implications for the market. Full conference information is available here.