UC Rusal smelters pulled back from the brink

The mounting risk that UC Rusal smelters will close in the coming months has dropped as the US Treasury permits new 2019 sales contracts.


Late on Friday, the US Treasury clarified that companies can enter new deals for UC Rusal metal for 2019; this had never been previously stated.

This is hugely important for buyers of UC Rusal metal on an annual basis and for the supply and delivery of essential raw materials. The new deals, which are allowed if they are similar to last year, are contingent on further actions from the US Treasury.

Major offtake agreements to remain in place
Of UC Rusal’s 3.8 million tonnes of production in 2016, 31% (of sales) went to Glencore via a multi-year offtake agreement which is expected to expire in 2019. The latest from the Treasury allows Glencore to continue taking a stable volume from UC Rusal even if that deal expires. This will keep ingot markets, which makes up the bulk of the offtake, relatively well supplied in 2019.

Major value-added products buyers will continue to buy in 2019
While a number of consumers around the world have already stopped buying from UC Rusal, a substantial share of UC Rusal value added products sales go to a relatively small number of customers. The European rolling slab, wire rod and primary foundry alloy and S. Korean primary foundry buyers are likely to extend existing contracts into 2019. Some of these buyers have been seeking new supplies and will reduce volumes from UC Rusal, but were struggling to completely replace Russian volumes. 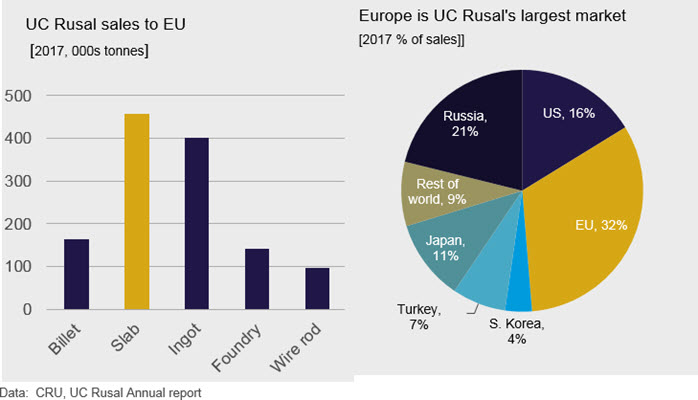 Freight should be plain sailing in 2019
We believe many of the freight deals that UC Rusal has across the value chain – from transporting caustic soda and anodes to metal, are agreed on an annual basis. There was the potential that the company would be unable to ship raw materials to refineries and smelters would be forced to curtail from a lack of raw materials.

One less thing to worry about for the alumina market
The potential for disruptions at UC Rusal’s refineries, was the risk that could have sent the alumina price to $1,000/t. A significant loss of output in Ireland or Jamaica would have resulted in panic buying and most likely smelter closures. For now, bauxite and caustic supplies should continue as should alumina sales.

Stable production is still not guaranteed for 2019
Continued sales into the Russian market and uninterrupted off take agreements and major VAP deals will allow UC Rusal to sell approximately 3.0 million tonnes of metal in 2019. The remaining uncontracted metal cannot be sold in new deals or delivered into LME warehouses. Therefore, we could see some minor curtailments in 2019. However, if the market views these cuts as temporary or if the government steps in and stockpiles we do not see this as a very bullish development for the LME aluminium price.

LME upside risk subsides, tight alumina market should keep the aluminium price over $2,000/t
Progress on UC Rusal will take one bullish factor off the table for the LME price. However, downside risk is limited, given that 40% of smelters are losing money at today’s price and a big sell off would force smelter cuts.

The market is now approaching key dates which will confirm if sanctions against UC Rusal will be lifted and if the market can return to normal.