2017 was a year of significant change for the global aluminium market.  The Chinese government initiated its aluminium supply-side reform policy, which we expect will limit long run primary capacity growth in China.  The year also saw barriers to Chinese exports rise, particularly in the US.

Russia to add the largest share of capacity outside China…
CRU has incorporated a number of greenfield and brownfield smelter expansions into our long term output forecasts. Although we still expect China to account for majority of the new smelting capacity, a large proportion of this capacity is yet to have started construction. The largest of these projects is Chalco’s Fangchenggang greenfield smelter in the Guangxi province. The development will be built in two 1Mtpy phases and start construction in 2020. 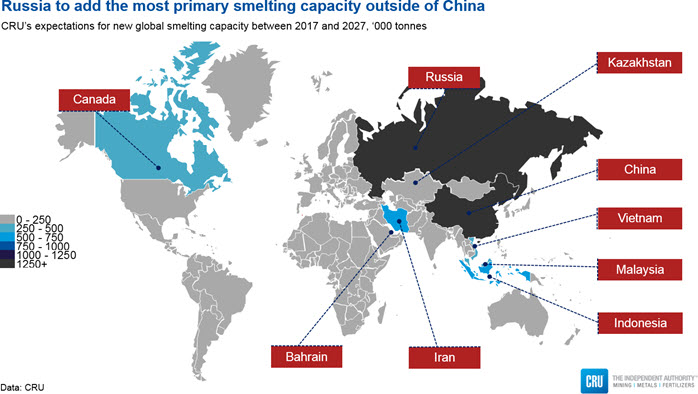 Outside of China, we expect Russia will add the most aluminium smelting capacity. The largest project currently under construction globally is UC Rusal’s Taishet project in Russia. In May 2017, UC Rusal announced that it has decided to restart construction at the 428,500tpy Taishet greenfield project. The company is also considering a second 555,100tpy line at the project using RA-550 (550kA) pot technology. This would lift overall production capacity at the plant to 983,600tpy.

CRU also expects more capacity to be added in the Middle East. This will be mainly driven by Alba’s line 6 brownfield expansion, which will contribute to an increase in Alba’s overall production capacity from 960,000tpy to 1.5Mtpy by 2019.

One of the most eye-catching smelting projects incorporated into our long term production forecasts is China Hongqiao Group’s 500,000tpy project in Indonesia. China Hongqiao Group is evaluating moving overseas some of the smelting capacity idled as part of the Chinese government’s supply-side reform policy. Indonesia appears to be the first choice for the relocation, as Hongqiao has a 1.0Mtpy alumina capacity in the country.

…but this will not be enough to meet primary demand by 2040
Despite this new capacity, CRU forecasts that primary production growth will be unable to match steady consumption growth in the long term. We expect that long term primary consumption growth will be boosted by increased demand from the electric vehicles sector. We consequently forecast that the world excluding China will need more smelters by the mid-2020s, beyond the reasonably firm expansion opportunities that we’ve already included in our base case.

Middle Eastern expansions could potentially close the gap…
CRU has also compiled a list of potential smelting projects that could come to fruition in the long term and fill the growing supply gap outside of China.

The majority of the potential capacity is concentrated in the Middle East and Asia, as illustrated below. One of the largest potential projects is the 600,000tpy EMAL 3 brownfield expansion. According to our calculations, the project has a high capital cost and a negative net present value, which is why we have not included it in our base case. 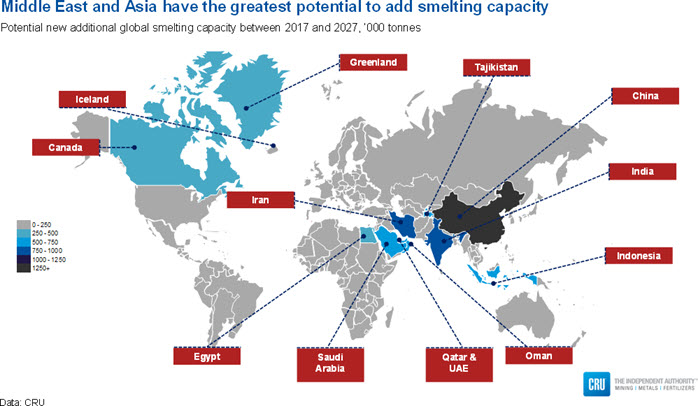 However, the CRU radar benchmarking system – which captures the more intangible factors contributing to a smelter’s long term competitiveness, such as bauxite and alumina supply, CO2 impact, downstream integration and power supply – indicates that expansion still represents an attractive proposition. The development has one of the highest CRU radar benchmarking system of all the non-completed projects globally due to it having an adjacent alumina refinery, value added casthouse and plans to use nuclear power. Therefore, the project could move to the construction stage if more favourable power and capital terms than we have estimated are agreed.

Or Chinese companies could invest overseas
Additional smelting capacity could also come from Chinese-backed smelting projects overseas linked to the Chinese Belt and Road Initiative. In June 2017, the Asian Infrastructure Investment Bank confirmed investing in a 16% financing stake of the country’s Nurek Hydropower Rehabilitation project. Yunnan Construction Engineering Group then announced a joint venture with Talco, Tajikistan’s state-owned producer, to demolish Talco’s existing 517,000tpy smelter and reconstruct a new 503,000tpy smelter to replace it. The Chinese could target more investment in smelting capacity in countries that are investing in power plants, such as Pakistan and Ethiopia.