Stricter environmental controls in China have led to acute shortages of natural gas and over 9.4 million tons of gas based urea production has been suspended. Together with rising coal prices and costs, the urea market in China will be tighter in the near term. Global implications are centered on additional supply from other marginal exporters as China supplies less in the export market.


Coal-to-Gas switching leads to a tighter supply of natural gas
Stricter environmental controls have been implemented over the autumn-winter period 2017/2018 in China. Three million enterprises in Beijing-Tianjin-Hebei and surrounding regions (alleged ‘2+26 cities’) were required to switch from coal to natural gas or electricity by the end of October 2017, to reduce coal consumption in winter.

The growth rates of domestic natural gas production and pipeline natural gas expansion were only 8.3% and 5.2% respectively during the first three quarters this year. As a result, the demand gap must be satisfied by the more expensive LNG.

Driven by the significant increase in demand, Chinese LNG prices doubled in one month from early November through to early December. The LNG price provided by local producers located in Inner Mongolia and Shanxi reached $1,200/t in early December from about $600/t in early November, while the sales price of imported LNG increased to $720/t from $600/t in south China during the same period. 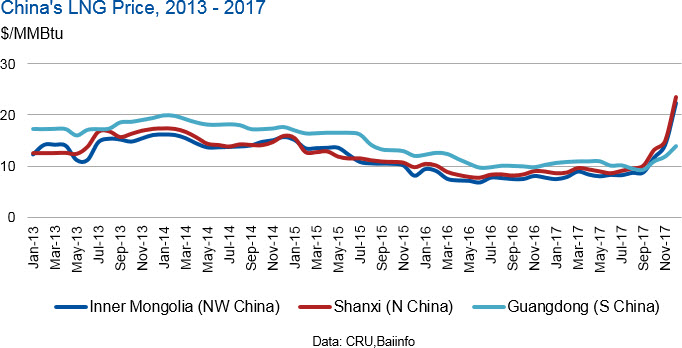 The surge in LNG prices attracted the attention of the Chinese government. On 4 December, the Ministry of Environmental Protection (MEP) released a document requesting local governments in the 2+26 cities to prioritise natural gas supply for heating. The places where the coal-to-gas and coal-to-electricity projects have not been completed can continue using coal for heating during this winter. The mandate stressed that natural gas supply for industrial purpose must make way for household use in the event of shortages/conflict.

Consequently, the supply of natural gas for industrial use including gas-based nitrogen producers has tightened significantly this year. We estimate 9.4 million tonnes of gas-based urea capacity suspended production by December 2017. This is in addition to the 2.3 million tons of gas based capacity we have already seen idled in 2017. 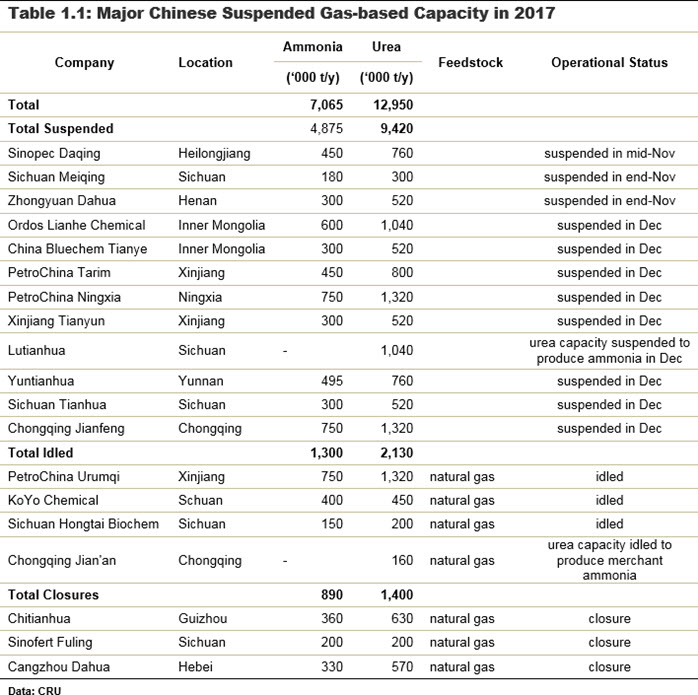 Hence, the pipeline gas price was capped by a 20% increase on the benchmark gate price despite the doubling of the LNG price.  For instance, the benchmark gate price is set at $7/MMBtu in Sichuan province and as a result the maximum price is $8.4/MMBtu for operational gas-based producers located in Sichuan this winter. Therefore, the 9.4 million tons of temporary closures are a consequence of tight feedstock supply rather than higher costs.

We expect natural gas supply in China to be tight until mid-March when the heating season comes to an end. The idled gas-based capacity is likely to restart in March in time for spring application season.

However, the demand and supply balance may be significantly tighter than normal from December 2017 through the end of February 2018. Driven by stricter environmental controls and strong demand from the methanol industry, Chinese lump anthracite prices increased by $38/t in the past three months from mid-September through to early December 2017. This surge pushed site costs of anthracite based producers close to $280/mt and led to a rapid increase in the domestic urea price. Chinese urea exports are less likely to feature during December to March and only for volumes above $260/mt FOB due to high raw material costs.

As a result, a few traders may take advantage of the tightening Chinese supply and demand as well as the increase in both lump anthracite and natural gas costs during this period to import urea from Middle East to southern China as speculative trade for spring application. We expect urea production in China to be lower in 2017 and 2018 with significant downside risk added over the medium-term forecast. If the Chinese government does not solve its feedstock concerns, we can well expect to see China becoming a modest seasonal importer. In addition, it may result in higher global urea prices if exports from China are still needed this spring, when Chinese supplies are tight. This is explored in further detail in the upcoming December Urea Market Outlook.