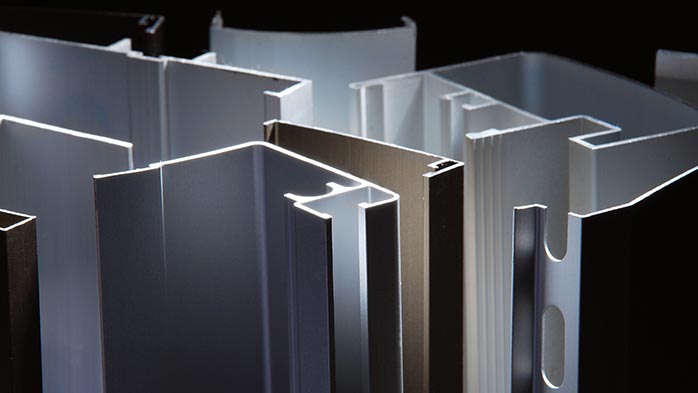 Extrusion companies have posted strong y/y shipments increases in 2018. While revenues have increased due to higher volume and price, EBITDA has increased to a lesser extent given higher costs.

However, shipments and revenue results indicate lower y/y growth in Q4 18 than in the full year, meaning that the year has ended weaker than the first three quarters. The major companies have reinforced the focus on high value-added products, highlighting opportunities of increasing aluminium intensity and new extrusion applications such as battery enclosures.


EBITDA margins were stable year on year
Constellium shipments increased more than 5% y/y, and 2% q/q. For Hydro, shipments have increased 2% y/y and were stable q/q. Kaiser shipments are also up 2% y/y, but decreased more than 4% q/q. Despite increased revenues across all companies analysed y/y, EBITDA margins were largely stable in 2018 compared to 2017, which was attributed to higher costs. Metal costs have increased, especially in the US with the Section 232 import tariffs. Companies also cited higher freight costs in 2018.

A total of four listed companies were used for the company report analysis: Hydro, Constellium, Kaiser and Grupa Kety. However, Grupa Kety does not provide quarterly shipments data, being therefore excluded from the volume analysis.

Although Zhongwang and Viohalco haven’t published their Q4 2018 results yet, we have included comments from their Q3 2018 and 1H 2018, respectively, on the consumption and strategy analysis. 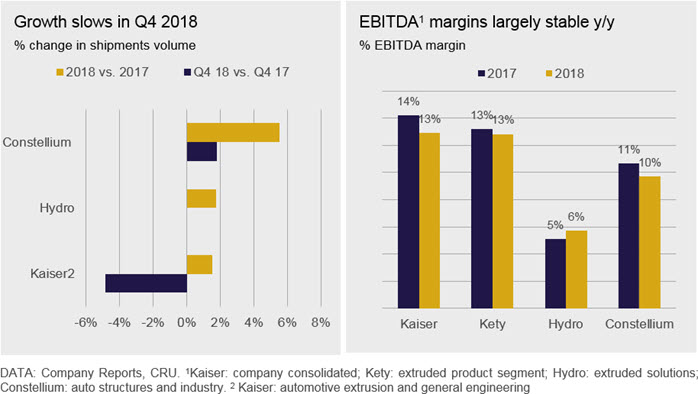 Consumption growth based on increasing aluminium content
The companies reported positive demand growth in major markets in 2018, and are expecting a stable 2019 y/y. While an overall increase in aluminium intensity is expected to boost consumption, macro risks are sources or uncertainty for the year ahead, such as slowing economic growth and the ongoing trade conflicts.

According to Kaiser, the aerospace market in North America has benefited from record commercial airframe builds, partially offset by aerospace supply chain destocking. The outlook for the market is for growing build rates and a moderation of the destocking effect as airframe manufacturers continue to address an order backlog greater than eight years.

Extrusion companies noted that sales to the automotive market are benefiting from increased intensity of use and have highlighted the great potential for extrusions for battery enclosures.

Kaiser reported that extrusion content continued to increase in North American automotive builds. However, the company expects 2019 to be a transition year as many of the existing programs are reaching end of life, and a number of new programs will be launched throughout the year, adding to the uncertainty of market sentiment and consumer acceptance of new vehicles. While the extrusion content on automotive platforms is expected to continue to increase in 2019, Kaiser expects build rates in North America to grow more slowly than in 2018.

CRU forecasts North America vehicle production growing at 0.8% in 2018, at 11.6 M units, but we note sales have softened and there is downside risk to domestic demand.

Extrusion opportunities for battery enclosure
Traditional aluminium applications for extruded products such as crash management systems and body structure have benefited from two major trends: enhanced vehicle safety and lightweighting. These are expected to support the growth of aluminium intensity in vehicles.

However, the new application in battery enclosures was highlighted as a potentially transformational market for extrusion products, both in terms of volume and margins.

According to Hydro, the battery frame for electrical vehicles is extrusion intensive and can reach up to 100 kg per unit, especially for premium vehicles and SUVs. Likewise, Constellium pointed out that battery closures could become the largest market for extrusion in cars by 2025, representing between 50% and 100% of the combined crash management systems, body structure and chassis market in 2025.

CRU estimates there are three main forms of battery housing: housing based on die cast and sheet material, extruded products and sheet material and, finally, steel-based housing featuring some aluminium. Auto producers are bullish on the outlook for aluminium demand in battery housing and particularly for extrusion-based battery housing for BEVs. BEVs by nature tend to have larger batteries and thus larger casings. These large casings often make up a large part of the vehicle base and are more suitable to construction from extrusions. However, PHEVs and particularly HEVs have smaller batteries and thus less requirement for housing. The smaller battery lends itself better to die cast cases than extruded aluminium cases. PHEV and HEVs are also more likely to be air-cooled meaning steel casings are more prevalent.

Focus on high value-added products
Extrusion companies are trying to exit commodity markets, aiming to prioritise value over volume, and focusing on the high-value added products.

Constellium stated the focus on manufacturing the “hard to make” products, which involves large and wide profile sections. After several investments to increase participation in the automotive structures market in the last few years, Constellium has announced recently another expansion at the Singen plant in Germany. The plant is the main extrusion supplier for Constellium Automotive Structures business in Europe.

Likewise, Hydro has a “value over volume” strategy, targeting the high-tech segments of extrusion. The company’s Extruded Solution business unit aims to deliver a minimum of 10% average annual underlying EBIT growth over the next three years (2018 recorded 3% EBIT margin vs. 4.4% in 2017), positioning itself as a supplier in the market for high-end products and stating the focus on increasing value added to customers.

Similarly, Kaiser stated that focuses on aero and high strength, automotive and general engineering products that require high strength, machinability or other specific properties that can create and maintain a competitive position linked to the company technical expertise, production capability and product quality.

Zhongwang extruded sales volume from January to September 2018 decreased 11.9% y/y, and the company justified the drop by the group’s emphasis on developing high value-added products such as aluminium formwork and alloy applications for transportation, which had occupied some production capacity from the industrial aluminium products. In 2018, Zhongwang announced a deal with Jaguar Land Rover to supply extrusion products to JLR as a tier-1 supplier.